The radical historian, David Montgomery, who died on December 2, 2011, was the doyen of American labor history. Well known for a half dozen major works on labor and the working class in the long nineteenth century, David’s scholarly work, political commitments and personal life exemplified the seamless web that animated his engagement with social justice, peace and equality. 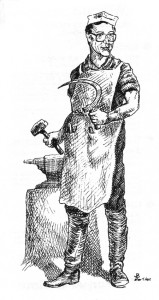 David was also a long-time friend and supporter of this journal and it is telling that many of his former doctoral students have served on our editorial collective. In 1982, when the Radical History Review struggled as an independently financed and operated journal, David signed on as one of eleven world-class historians to serve as Associate Editors, a supportive role that lent his prestige and consequent credibility to a journal largely run by graduate students and recent PhDs. In the last decade he helped found Historians Against the War (HAW) and remained a stalwart force in the organization.

The Radical History Review will publish a fuller appreciation of David Montgomery’s life and work in a forthcoming issue. “Once Upon a Shop Floor: An Interview with David Montgomery,” conducted by two RHR editors, Paul Buhle and Mark Naison, gives voice to the remarkable history of this remarkable man, historian and friend. The interview was originally published in the RHR in Spring 1980 and subsequently appeared in the RHR book, Visions of History (Pantheon, 1983).