Forum 3.1 // Four Things You Need to Know About the Border by Lisa Sun-Hee Park 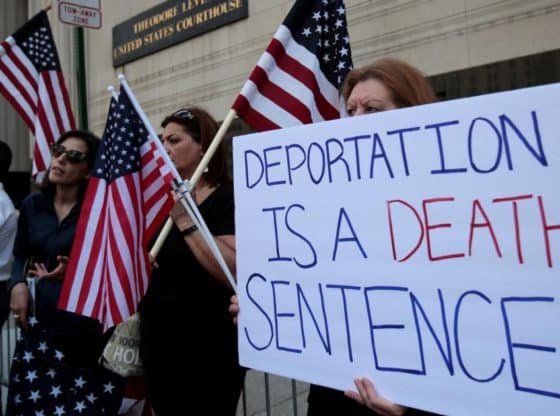 Protestors outside the Theodore Levin US Courthouse in Detroit, MI rally in support of Iraqi nationals charged with deportation. Courtesy of Human Rights Watch.
Featured,Forums,The Border is the Crisis |

Recently, there has been a dizzying number of immigration control initiatives and the U.S.-Mexico border has featured prominently in these efforts.  The border is a potent symbol of inclusion and exclusion that extends well beyond a literal wall that frames the boundaries of a nation.  It is a powerful, shape-shifting presence that can be felt anywhere through its overt as well as covert enforcement.  The following are four things about the border you may not already know but should.

1. State-sanctioned violence against migrants at the US-Mexico border is not new.  The family separations, indefinite detentions, and other humanitarian crises experienced by migrants today are a continuation of a long history of hostility that comes in many forms. Take the case of medical deportations – the forced removal of chronically ill or severely injured immigrants to other nations – that has been happening for years in the U.S.  It is a lesser known, on-going example of border violence that is no less egregious in its effects.  Some of the most contentious cases involve the transportation of unconscious immigrants in need of serious long-term care to rudimentary clinics in other countries that agree to accept these patients in exchange for expensive medical equipment.  Not only is this an unregulated practice carried out by hospitals, it is in violation of U.S. law that explicitly states that deportations are the exclusive province of the federal Department of Homeland Security.  Federal immigration authorities and many local law enforcement agencies have remained silent on this issue, thereby allowing it to continue. By orchestrating the deportations, the hospitals extend the reach of the state, and actually supplant the state, by engaging directly in the act of removal in cases where the state has no interest or has refused to do so.  Medical deportations are an egregious violation of human rights (not to mention due process, informed consent, and privacy) that have been decried by the American College of Physicians and the American Medical Association.  And yet it continues. A historical analysis is necessary to understand the cruelty and abuse at the border as part of a larger system that allows such actions.  As devastating as it is, caging children is not, nor has it ever been, an “abnormal” act within the systemic logic of border control.

2. Border enforcement comes in many forms and we must be attentive to covert as well as overt methods.  For instance, ‘public charge’ is an essential immigration policy that is too often overlooked.  For over 100 years, this statutory provision has existed under the jurisdiction of nonjudicial staff and without oversight by legislatures or courts.  It has allowed the forced removal of immigrants, including those with legal residency status, based upon a largely discretionary determination of an individual’s potential to become a burden on the state. In its early stage, during the mass migration of Europeans during the turn of the last century (1892 -1920), public charge was the most frequently used category of exclusion given its conveniently vague applicability.

More recently, on August 12, 2019, the Trump administration announced imminent changes to the public charge law to severely restrict legal immigration by denying permanent residency (or “green cards”) to migrants who use Medicaid, food stamps, public housing subsidies, and other forms of public assistance.  This effort to dramatically change the national immigration system has been in the works since the beginning of Trump’s presidency; and as an administrative law, this change does not require congressional approval.  In fact, shortly after Donald Trump’s inauguration, an internal memo was leaked from the Department of Homeland Security that proposed new guidelines to greatly expand those considered ‘inadmissible’ for using or appear likely to use public benefits, for which they are eligible.  In effect, the Trump administration saw public charge as an opportunity to turn “legal” immigrants “illegal” – a practice that had been previously used to deny immigrants access to healthcare and social welfare programs.  In addition, this effort highlights the disingenuous rhetoric of anti-immigrant groups that call for harsh measures against “illegal” or “bad” immigration because it harms the “legal” or “good” immigrants. There is no difference.  In fact, “illegal migration” measures are simply a foil for the real target of all migrants.

3. The border is never separate from the internal workings of the nation.  In fact, in the U.S., one could argue that the border is where the internal anxieties of the nation are articulated.  Since the 1990s, the border has taken on even greater symbolic and cultural importance for U.S. national identity.  Anxiety regarding national security helped solidify the southern borderlands as a tangible front in the frequently intangible “global war on terror.” At the same time, the rapidly growing immigrant population began to settle in non-traditional destination states.  Work opportunities in the Southeast, Midwest, and Rocky Mountain states attracted immigrants away from the usual coastal cities.  The foreign-born population more than doubled in many of these new destinations between 1990 and 2000.  And, while Kitty Calavita, Ruth Milkman, and other scholars repeatedly note the historical fact that wage levels fell and income inequality grew as a result of deindustrialization, capital flight, economic restructuring, and the dismantling of labor unions in the 1970s and 80s (all of which occurred before the current influx of immigrants into middle America), immigrants remain easy targets during these unsettling times.  Strengthening the U.S.-Mexico border, then, is seen as necessary for regaining a sense of stability, particularly perhaps for those communities further away from the borderlands who see their lives in the “heartland” changing in ways that no longer center their experience.

4. Migration patterns are not haphazard.  Large-scale emigration is directly tied to U.S. empire, whether by capital investments, political ties, or military engagement.  For instance, U.S. trade with Mexico grew by a factor of eight from 1986 to 2004.  However, national immigration policy remains almost entirely fixated on border control despite this embedded connection between the movement of capital and the movement of people.  The popular preoccupation with the literal U.S.-Mexico border has served as an easy scapegoat for various national anxieties, particularly those surrounding national security and economic security.  In this way, the current seemingly unnecessary humanitarian crisis at the border actually provides big political gains.  The resulting disintegration of civil rights and the social safety net for both citizens and non-citizens in the name of border control serves an important role in empire building.  Fundamentally, borders are demarcations of power.

Lisa Sun-Hee Park is professor and chair of Asian American Studies, with affiliations in Feminist Studies and Sociology at the University of California, Santa Barbara.  Park’s interdisciplinary research focuses on the politics of migration, race, health care, and environmental justice. She is currently working on two different projects: 1) medical deportation and the state of the health care safety net for low-income uninsured immigrants in the U.S. and 2) “Environmental Privilege, Climate Change, and Making a Killing On the Coming Apocalypse.”

1969 and All That: Age, Consent, and the Myth of Queer Decriminalization in Canada
Forum 3.2 // The Racist, Sexist, Classist, and Homophobic Past of the “Public Charge” Clause by Julio Capó, Jr.