Counter-Editorial: Déboulonnons le récit officiel: Haiti’s challenge to a monumental version of the past 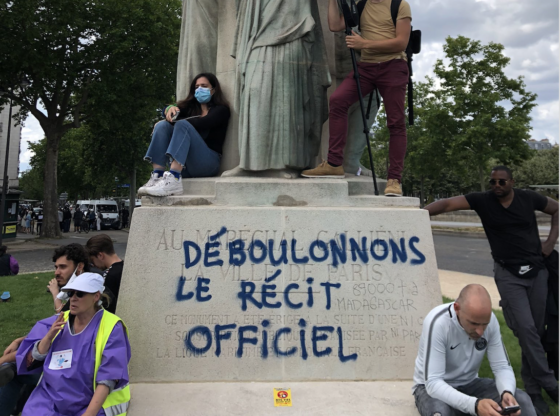 As monuments are dismantled and statues brought down across the globe, debates about slavery, memory, histories, and silences have come to occupy the public sphere and public squares the world over. Though earlier moments of collective action have resulted in crushed dictators, capsized Columbuses, crumpled confederate soldiers, and beheaded empresses, the global scope and speed at which monuments to enslavement and imperialism are coming down is breathtaking. It has also unsettled some people, whose understanding of history–and of our present–hews closely to the official, monumental version of the past.

It is not surprising that these debates about memory, slavery, and H/history spilled out into public view on social media and the listserv of H-France, the digital scholarly platform that bills itself as the “largest scholarly organization for Francophone history and culture in the Anglophone world.” The affair began rather mundanely: Dr. Marlene Daut (a full professor of African Diaspora Studies and woman of color who, in full disclosure, I know and work with) posted a message to the discussion list linking to a recent piece she had written calling for the removal of Thomas Jefferson’s statue in Paris and replacing it with more meaningful antislavery figures. Her message was met with a swift and rather staggering reply from Dr. Vivian Gruder (an emeritus professor of history whom I do not know) who policed the original poster’s tone on behalf of “historians” (“The voice is not the voice of a historian”) and proceeded to engage in what a scholar of French history deemed “pure moral relativism” regarding Jefferson’s legacy. That Gruder’s response also encouraged listserv readers to further explore “the nature of slavery and slave-trading also in Africa” and a separate aside on the “less glorious” legacy of the Haitian Revolution may shock, but it certainly does not surprise.

Overall, the response from the H-France community was critical of Gruder’s treatment of Daut, as many of the archived responses (on the listserv and on Twitter) attest.[1] Daut herself provided a blazing response, evoking Lauren Berlant’s concept of “Diva Citizenship” to describe what happens “when a person stages a dramatic coup in a public sphere in which she does not have privilege.” Dr. Annette Joseph-Gabriel, who recently published an interdisciplinary literary and historical study of Black women activists, wrote a response that highlighted how language is coded and mobilized to delegitimize a speaker. The affair struck a nerve outside of academia, too, mobilizing critics invested in exposing the problem of “liberal academics” and upholding a certain, monumental version of Western civilization.

My intervention here is about Haiti and about the abusable past.[2]  Not about the uninformed, throwaway jab taken in a cranky listserv post, but about how Haiti reveals the problem with Gruder’s position — and many French historians — that fail to recognize the centrality of the French empire to French history. Haiti reveals the fallacy of Gruder’s accusations of presentism and offers a challenge to any uncritical, selective, or redemptive memorialization of the imperial past–on both sides of the Atlantic. It is also about how Haiti helps us write a history of the present moment, implicated as Haiti is in France and the US: in our own past, our political present and our collective future.

The study of Haiti and the Haitian Revolution helps us write a history of the present and envision a possible future beyond the US’s failure to reconcile how slavery has shaped American institutions, and beyond France’s color-blind racism and incomplete universalism. This is perhaps why Haiti remains so marginal to official histories of US and French history. As I have outlined elsewhere and as I expand upon further in my book, Haitians’ just seizure of their own human rights challenged more than just racist systems of chattel slavery and white supremacy. The Haitian Revolution and the establishment of an independent, antislavery Black state of Haiti challenged the entire conceit of the West by shining a light on the paradoxes and the hypocrisy inherent in the very systems of belief that undergirded its expansion and supremacy. Haiti’s successful independence, self-liberation, and abolition critiqued the Western tradition in formation, in real time at the turn of the nineteenth century. The US needed to erase Haiti, to limit its engagement with Haiti to the revolution and its subsequent “failed legacy” in order to create a dangerous, illegitimate non-nation against which the slaveholding American polity defined itself. Historians, politicians, and everyday people continue to erase Haiti because it still troubles a system that remains our own, a system of paradoxes and hypocrisy.

The case of Haiti’s legacy in France’s official history is even more complicated: the legacy of the Haitian Revolution is conspicuously present via the revolutionary figure of Toussaint Louverture (a process Charles Forsdick calls “domestication and gallicization […] into more self-congratulatory narratives of French republicanism”). Yet the independent antislavery, anticolonial nation of Haiti remains conspicuously absent from French history (as does Haiti’s liberator, Jean-Jacques Dessalines). This is because, “Rereading events in France through the quizzing glass of Haiti is to clarify the reciprocal dependencies, the uncanny resemblances that no ideology of difference can remove” (Dayan, Haiti, History, and the Gods, 13). The words of Colin Dayan, more pertinent today than they were when she first wrote them 25 years ago, show how France needs Haiti–the only place where its triumphant universalism realized itself, wrested itself free from France in its antislavery anticolonial proclamation of independence from France. France needs Haiti because Haiti demands that we look upon France through a different lens. Haiti demands that we take France at its “universalist” word and find it wanting.

For their part, and as Marlene Daut’s work continually shows us, Haitians have been contesting their erasure and their unequal treatment in French and US contexts, raising questions about the limits of universalism and “civilization,” for over two centuries. The example of the Haitian writer Louis Joseph Janvier is instructive. Living and writing in Paris in the 1880s, he witnessed the racist, imperialist language of France’s new mission civilisatrice (“civilizing mission”) unfolding in real time. He also watched as the US threatened to expand its influence into Latin America and the Caribbean, creating neocolonial dependencies out of independent, anti-slavery republics in the hemisphere. Janvier sent up flares, warning Haitians back home–and the rest of the non-white, non-Western world–that a new global neocolonial project was in motion (See Louis Joseph Janvier, Haiti for the Haitians, eds Brandon Byrd, Chelsea Stieber, and Nathan Dize, in progress with Liverpool University Press).

The ostensibly tangential evocation of the legacy of the Haitian Revolution in the responses to an opinion piece on Jeffersonian statuary in France–playing out on the pages of an Anglophone listserv dedicated to French history–betrays the centrality of Haiti to the entire discussion. France and the US both need the Haitian Revolution to succeed to validate their shared commitment to Enlightenment liberalism and simultaneously need the legacy of the revolution to fail so that they need not probe any deeper into the foundational paradoxes of their national projects.

I addressed this issue in my listserv response:

As Dr. Gruder states in her response to Professor Daut, historians are supposed to

highlight complexity. I write to take issue with Dr. Gruder’s simplistic characterization of the “longterm legacy” of the Haitian Revolution.

The legacy of the Haitian Revolution must take into account the idea of the great Black Republic, a beacon of hope and promise of future liberation for enslaved Black people in the US South, Cuba, and the wider Atlantic world throughout the early nineteenth century. In the early twentieth century, Black intellectuals, writers, and playwrights allegorized Haiti’s radical antislavery revolution and its leaders as part of their radical struggle for freedom and self-determination.

The legacy of the Haitian Revolution must also take into account the immediate response from pro-slavery advocates on both sides of the Atlantic, who promoted the idea of a dangerous, illegitimate Haitian Revolution. Pro-slavery advocates in the US instrumentalized the Haitian Revolution: they created the image of a violent, horror-filled abyss and held it up as a warning–a foil–against which the slaveholding American polity defined itself. These discursive creations of a dangerous, illegitimate Haitian Revolution abound throughout the nineteenth century and well into the twentieth. Indeed, these early nineteenth-century discursive creations cannot be disentangled from the deeply offensive “sh*thole country” label that nativists and white supremacists deploy today.

Today, as millions of people worldwide are protesting in the streets to demand the recognition of the inviolable dignity of Black lives, it is clear to me that there is one aspect of the complex legacy of the Haitian Revolution that matters most. It is the critique of the narrow confines of white, Western normativity and its continual assertion of the dignity of Black lives. A glorious and complex legacy indeed.

Haiti–its history, its revolution and its legacy, its texts, and its people–is at the heart of the debates that are paralyzing France and the US and, let us be hopeful, propelling them toward some new understanding of race and racism in society. To dismiss Haiti is to accede to the centuries of white, western silencing of Haiti’s vital critique. To recognize Haiti is to begin to see the inescapable connectedness of the systems of oppression and injustice that link France and the US.

Déboulonnons le récit officiel (Let’s take down the official history) French protestors spray painted on the statue of Joseph Gallieni, a military commander and colonial administrator who committed barbaric atrocities in the service of France’s “civilizing” mission. To loosen the bolts, consider not a tool from the master’s pile, but a small axe, well sharp.

Chelsea Stieber is the author of Haiti’s Paper War: Post-independence Writing, Civil War, and the Making of the Republic, 1804–1954 (New York University Press, 2020). She recently launched a collaborative digital humanities project with the National Digital Initiatives at the Library of Congress and the Société Haïtienne d’Histoire de Géographie et de Géologie and is a coeditor with Brandon Byrd and Nathan Dize for the critical translation of Louis Joseph Janvier’s 1884 text Haiti for the Haitians (in progress with Liverpool University Press). She is currently a 2020 ACLS fellow working on a new project on Caribbean Fascism. She teaches French and Francophone Studies at Catholic University.

[1] It bears noting that the editor of H-France decided to shut down the discussion thread and encouraged participants to move their discussion to Twitter, thereby rendering the listserv “archive” incomplete for anyone wishing to see the full accounting of responses members wished to make. As Dr. Jennifer Sessions noted, this discussion took place as another arm of the organization, H-France Salon, was promoting its forthcoming series on race and racism in the study of the French and Francophone world.

[2] A requisite note on positionality: I write as a scholar trained in a literary and social science interdisciplinary PhD program in French and Francophone Studies in the U.S. who works on Haitian history and literature. I chose to work on Haiti, indeed perhaps I was impelled, because it offered a critique and a challenge to the dominant, self-referential, official norms that govern French historical and literary studies. In other words: Haitian Studies is a decolonial practice.