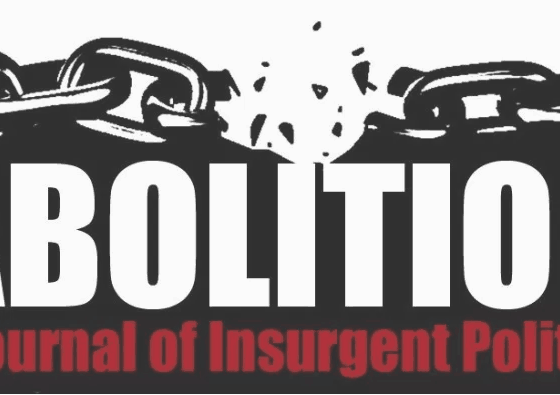 In the manifesto of the Abolition Collective—drafted collectivity and collaboratively without individual attribution as an openly revisable statement—we write:

Academic journals have functioned to maintain a culture of conformity, legitimated with myths of ‘political neutrality’ and ‘meritocracy.’ At the same time, colleges and universities have always been terrains of struggle… We refuse to abandon the resources of academia to those who perpetuate the status quo. Instead, we are creating a new project, centered around Abolition: A Journal of Insurgent Politics—for research, publishing, and study that encourage us to make the impossible possible, to seek transformation well beyond policy change and toward revolutionary abolitionism.[1]

Abolition: A Journal of Insurgent Politics took root as a project in 2014 when a small group of folks—most of whom were graduate students and unemployed, contingently employed, and untenured faculty—were searching for ways to navigate the conflicts we experience between our political commitments and surviving in the academy. For many of us, because of the nature of the work we do as critical scholars of the institutions of which we are a part, it is simply not possible to separate our academic pursuits and our commitments to radical political thought and action. Yet even as we carved out marginal spaces within our classrooms, at conferences, and in the pages of some journals, we found ourselves again and again confronting the pervasive idea that our work—to be rigorous, legitimate, and scholarly—had to support and be supported by a regime of knowledge production that claims to be apolitical or somehow outside of power. For many of us, the very nature of our scholarly work showed us again and again the falsity of this idea.

Connected as we are in variously precarious and contingent ways to the academy and to its dominant knowledge validation processes,[2] one of our central pragmatic question is: how do we survive in the university-as-such while also trying to work beyond and against it?[3] We recognize that academic publishing is central to legitimating knowledge production practices, credentialing scholars, and disciplining subjects to materially depend upon and support these institutions. This is in spite of the glaring reality that the political economy of higher education staffing is openly exploitative, and that exploitation relies on the “prestige” conferred by the “peer-review process” to mask its reproduction. [4] That is: the problem with peer-review systems may not be that they are “broken,” but rather that they are working quite effectively to uphold disciplinary knowledge production and reactionary academic institutions that are actively opposed to critical scholarship and mutual liberation for all.

A partial solution to this problem was to start a new journal, one that would be dedicated both to research and study (broadly conceived to include artistic and literary as well as social scientific and humanist scholarly analysis) and to changing how research and study is published. Moreover, Abolition Journal would directly seek to support—in speech and action, in theory and practice—the immoderate rejection of white supremacy, of whiteness itself, of patriarchy, of hetero-normativity, of ableism, of settler-colonialism, of border imperialism, of political hierarchies of all kinds, of the rule of capital, and of capitalism itself. Organized around what we call the “tense relation” between various movements and struggles that adopt the idea of abolition, the journal seeks to “support studies of the entanglement of different systems of oppression, not to erase the tensions between different movements, but to create spaces for collective experimentation with those tensions.”[5]

In doing this work, however, we face the difficulty expressed eloquently by Audre Lorde: “For we have, built into all of us, old blueprints of expectation and response, old structures of oppression, and these must be altered at the same time as we alter the living conditions which are a result of those structures.”[6] We do not entirely know yet how to study, to research, and to share our findings outside of the blueprints we have, but we can—and must—work to alter these conditions even as we find ourselves within them.

This is where taking on a self-consciously abolitionist approach to knowledge production is helpful for thinking about scholarly publication and peer review: abolition operates as both a horizon and as a prefigurative practice. Far from its typical caricature as “unrealistic” or “impractical,” abolitionist practice takes as its starting point the reality that the world as we know it is intolerable and that we must overthrow it from where we currently stand. [7] Or as prison abolitionist Rose Braz puts it: “Abolition defines both the end goal we seek and the way we do our work today. … Abolition is not just an end goal but a strategy today.”[8]

From its beginning, we have strived to publish work about abolitionist movements in an abolitionist way, embracing abolition as a strategic practice to help build a world of meaningful freedom. Put concretely this has meant that, while Abolition Journal has not abandoned “peer review,” we have sought to cultivate it in a different form by questioning its typical understanding and “normal” practice in academic publishing. This is a self-consciously strategic embrace of peer review not for the sake of reviving it, but for repurposing it beyond and against the academy. In doing so, our strategy is oriented by three lines of critique.

First, we question the purpose of peer review. Rather than being primarily a mode of knowledge validation, we think of peer review as a way to build relationships of trust to support movement building and radical study. As we put it in our manifesto: “We are not abandoning peer review—sharing writing with respected comrades and giving each other feedback before wider circulation—which can be useful for movements to strengthen and amplify their intellectual activities.”[9] Strategically, this means that our standard mode of review is open and transparent. We prefer for authors and reviewers to know who each other are, and our editorial work includes facilitating critique, feedback, and intellectual exchange. We do not rely on the fantasy of the isolated and individual “expert” to determine trust, but rather recognize that all knowledge production (like all production) is cooperative and social. And we have found that our shared commitments to abolitionist practice and study, rather than contrived anonymity, compels us to be rigorous and careful readers of each other’s work. We believe we share these commitments because that is how we learn to trust one another.[10] At the same time, because we also recognize that scholars whose labor conditions are precarious may require “double-anonymous” review, we invite authors who need a more traditional process to request it and we are always willing to document that process.[11]

Second, we question and redefine who counts as a peer. We always remember that the seemingly egalitarian meaning of the word “peer” has historically indicated rank and (higher) social status. Language carries its history, and the notion of the “peer” continues to be distinguished from the “peasant,” especially in the hierarchical (and feudal) systems of apprenticeship and rank that structure the academy. Instead, “our peers are in the streets, comrades in arms, and movement actors for whom these questions are anything but ‘academic’ or ‘ideal curiosities.”[12] For the sake of radical study and abolitionist practice, we reject the idea that one’s peer is automatically a member of one’s social or political class. Just because someone holds similar academic credentials does not mean they are our peers in struggle, as we so often find out when academics align themselves against the interests of contingent faculty, staff, students, and movement actors. Strategically, this means that we strive to have all submissions reviewed by those involved in the struggles and movements studied, including both those who find themselves primarily in the academy, and those who find themselves primarily within movement organizing. We try to avoid distinguishing between “academics” and “activists” but rather try to identify reviewers and collective members by their primary space of activity. This also means that we work to include currently and formerly incarcerated people in our collective, refusing to accept a distinction between “civil academics” and “uncivil criminals.”

But lastly, and most importantly, we do not think of peer review as an “eternal necessity” because we do not think of the academy as the sole location for knowledge production and collective study. Our strategic approach to peer review reflects this reality, recognizing that we find ourselves nevertheless within the academy even as we struggle to be against it and get beyond it. As put by a founding member of the Abolition Collective, Eli Meyerhoff, we recognize that many of us desire to survive within the academy and there are resources within the academy that can (and should) be used. But, Meyerhoff notes, “Rather than taking academics’ desires to survive within the academy as eternal necessities, we foresee that the success of abolitionist projects will change the availability of resources for intellectual activity as well as the terms on which we understand what counts as a ‘resource.’ … We devote our living labor to building relationships for alternative institutions of peer review.”[13]

For our part at Abolition Journal, we see peer-review as such a resource. We can make it more available to those involved in collective study, political struggle, and movement organizing, as a tool for reflection and intellectual critique by questioning its terms and practices. But that questioning is ultimately directed toward the broader project of dismantling academic capitalism and practicing modes of study beyond the university-as-such. We have no desire to “save” the peer review system, but rather, we hope to make it (and the systems of hierarchy it supports) obsolete. Our goal is not to “save” the academy, but to save ourselves and those with whom we share the world. That is to say: If we are going to spend our living labor on editing, reviewing, and curating scholarship, we want it to be for a world beyond this one.

Editor note: The first issue of Abolition: A Journal of Insurgent Politics is available for purchase from Common Notions.

Andrew Dilts is a founding member of the Abolition Collective, which edits Abolition: A Journal of Insurgent Politics (published by Common Notions). Dilts also studies and teaches political theory in Los Angeles at Loyola Marymount University. Dilts is the author of Punishment and Inclusion: Race, Membership, and the Limits of American Liberalism (Fordham Press, 2014) and co-editor (with Perry Zurn) of Active Intolerance: Michel Foucault, the Prisons, Information Group, and the Future of Abolition (Palgrave, 2016). They have also co-edited multiple issues of The Carceral Notebooks and a special guest project at Radical Philosophy Review. Thank you to Sina Kramer, Eli Meyerhoff, and Jecca Namakkal and for their helpful comments on this essay.

[7] Contemporary abolitionists are dreamers perhaps, but they are hardly idle ones. See Dan Berger, Mariame Kaba, and David Stein, “What Abolitionists Do,” August 24, 2017, http://jacobinmag.com/2017/08/prison-abolition-reform-mass-incarceration.

[10] As a widely circulated internet meme puts it: “Be careful with each other so you can be dangerous together.”

[11] We avoid the language of “double-blind” not merely because it is ablest, but also because in an era of online digital scholarship, its role in maintaining the myth of neutrality and meritocracy is increasingly untenable and ideological.

[13] Devon Douglas-Bowers, “We Are the Insurgency: An Interview with Abolition,” The Hampton Institute, January 27, 2015, https://www.hamptoninstitution.org/interview-with-abolition.html.