Forum 2.1 // For Mauna Kea to Live, TMT Must Leave, by David Uahikeaikalei‘ohu Maile 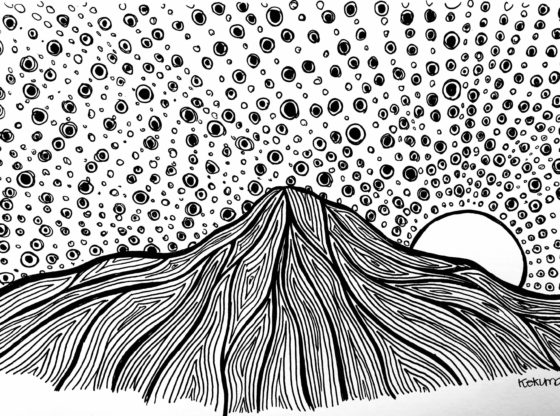 What is above will come down

What is below will rise up

The islands shall unite

The walls shall stand upright

During ceremonial protocol, the protectors of Mauna Kea orient themselves to a unifying purpose: stop the Thirty Meter Telescope (TMT). On July 15, 2019, I joined them at the entrance to Mauna Kea Access Road where a blockade began to form. Three times a day, we strengthened our commitment by singing mele, dancing hula, and chanting oli. One oli chanted is E Iho Ana. A prophecy that Kapihe told Kamehameha in 1812, it forecasted prodigious changes in Hawaiian society. Today we repeat it to signal another moment and spirit of transformation. Reciting these words shoulder-to-shoulder with thousands of protectors, or kia‘i, I felt a shifting. Thick mist covered the road. Clouds rolled in to blanket the mountain. Sometimes, even with the wind intensifying, nēnē geese would glide close overhead. Our akua and ‘aumakua were with us. As we chanted each line, TMT could not be built. There was no buzzing from heavy machinery just the roaring sound of our voices. We were winning.

The blockade established to stop TMT is a critical negation and affirmation. Kia‘i have successfully prevented TMT construction. After years of litigation, the State of Hawaii, a US settler-state illegally occupying Hawai‘i, issued a notice on June 20, 2019 for development to proceed. One month later, the settler-state announced that construction would commence on July 15, 2019. That early Monday morning, eight kia‘i chained themselves to a cattle guard grate near the access road’s entrance—some risked their lives locked down for 12 hours—blocking a caravan of crews and their machines from ascending to TMT’s build site at the northern plateau. After their stand, a permanent blockade formed near the cattle guard, consisting mostly of kūpuna or elders. On Wednesday that week, police attempted to disband them and arrested 38 people, almost all of whom were kūpuna. Threatened by police and military forces and two hurricanes, kūpuna and their kia‘i have not left. Together, we refuse to allow the TMT to desecrate our sacred mountain and destroy its fragile ecosystem. “These forms of direct action,” Glen Coulthard reminds us in his essay in Unsettling America, “seek to negatively impact the economic infrastructure that is core to the colonial accumulation of capital in settler political economies.” This negation is centered on affirming ea, the life and sovereignty of our people and Mauna a Wākea.

As development continues to be stopped, kia‘i are engaging in cultural and political resurgence. Another oli performed during ceremony is Poli‘ahu I Ke Kapu, which Lanakila Mangauil chants as Hāwane Rios dances its hula. It focuses on the snow goddess, Poli‘ahu, she who resides at the summit of Mauna Kea. The oli speaks about Poli‘ahu and her relationship to other akua inhabiting the mountain, such as Waiau, Mo‘oinanea, and Lilinoe. For instance, Lilinoe is the younger sister of Poli‘ahu. Lilinoe’s kino lau and physical manifestation is the fine mist that shelters the mauna to maintain the kapu, or sacred protection, on her older sister. She is the same mist that embraced us from our heads to our bones as we chanted E Iho Ana. Poli‘ahu I Ke Kapu recants how Mauna Kea is a storied, sacred realm where female water akua dwell. Oli and hula like this one confer kuleana, or responsibility, to protect this place so that the akua, mauna, and our kinship with them live on. In an interview with For The Wild, Pua Case says, “They are more than mountains, than water, and landmasses. They are ancestors, they are teachers, they are our links to our lineage, and they remind us of our responsibility.” While Indigenous knowledge and practices might appear simply cultural, these are Kanaka Maoli forms of political order that orient and ground the blockade of TMT construction, which the settler-state deems illegal. Considering Coulthard’s suggestion in “For Our Nations to Live, Capitalism Must Die,” this instead “embod[ies] an enactment of Indigenous law and the obligations such laws place on Indigenous peoples to uphold the relations of reciprocity that shape our engagements with the human and non-human world – the land.” In our cultural resurgence, we are crafting alternatives to the death-dealing of corporate development linked to global capital and settler colonialism.

The current defense at the base of Mauna a Wākea is building the lāhui Hawai‘i, the people and nation of Hawai‘i. Noelani Goodyear-Ka‘ōpua, in an interview for The New Inquiry, notes that the blockade is possible because of the pu‘uhonua, or sanctuary, established at Pu‘uhuluhulu adjacent to the access road: “The Royal Order of Kamehameha declared that if anyone were being threatened by the settler state they could seek refuge in the pu‘uhonua and they would be protected.” It offers free housing, food, health care, child care, transportation, and education to everyone. For example, Presley Ah Mook Sang and other organizers created the University of Pu‘uhuluhulu, which typically holds 20 classes taught by professors and practitioners each day. Since opening more than 200 classes have been held, ranging from “Papa ‘Ōlelo Hawai‘i” to “Pono Science” to “Mana Wahine & Hawaiian Feminism.” Building a sovereign future for Hawai‘i is happening in the present, now, within the presence of Mauna Kea. In “Fight for the Future,” Goodyear-Ka‘ōpua argues that the “Pu‘uhonua o Pu‘uhuluhulu presents a powerful, living example of a self-organized, noncapitalist community that is based on Indigenous Hawaiian values, is led by Kanaka Maoli, and includes everyone who abides by the Kapu Aloha. It is an emergent alternative to settler-colonial ways of governing, of providing for peoples’ needs, and of living in relation to the land.” This is genuine nation building that is occurring beyond the orbit of the settler state. But the struggle is not over.

As kūpuna and kia‘i remain steadfast, the settler state is still bent on removing them for TMT construction to begin. It is a fundamental impasse. However, the project has the ability to relocate. It’s time for those governing the project to abandon their hope for developing on our sacred mountain.

We know that for Mauna Kea to live, TMT must leave.

(Dis)location/Black Exodus and the Anti-Eviction Mapping Project
Forum 2.2 // In Ceremony and Struggle: The Lāhui at Puʻuhonua o Puʻuhuluhulu, by Iokepa Casumbal-Salazar