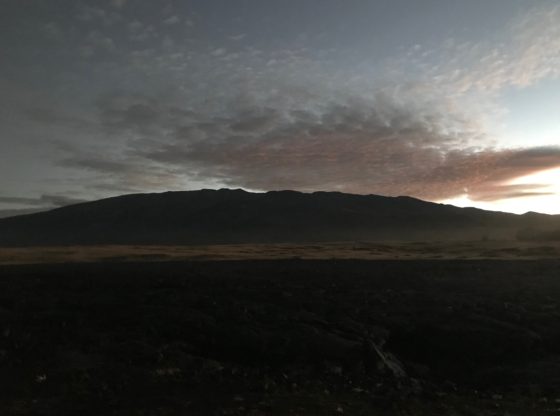 I cried as I watched eight fierce aloha ʻāina (land defenders) chain themselves to a cattle guard on the summit access road at the base of Mauna a Wākea on July 15th 2019 for twelve hours in an effort to stop work crews from beginning construction on the Thirty Meter Telescope (TMT). I cried two days later as I watched 38 kūpuna (elders) have their wrists zip-tied, escorted and some carried into police vans, arrested, and charged for “obstructing government operations.” I cried as I bore witness to kapu aloha—the non-violent code of ethics governing community behavior in this movement. I cried watching in horror as riot gear-clad state and county police—equipped with pepper spray, tear gas, batons, side arms, and a “noise cannon”—lined the road, poised to crack skulls; many with tears in their own eyes as many were also Kanaka ʻŌiwi (Native Hawaiian).

Before a third round of vans could be loaded with more kūpuna, several dozen women jumped up, stood between them and the police, linked arms, and began to oli—chanting down the state’s demonstrated willingness to use physical force on peaceful protestors. Governor David Ige’s so-called “government operations” are evidence of the settler state’s commitment to capitalist development; to protecting the corporate interests of a multinational consortium of scientific industrialists bent on erecting “the next world’s largest telescope.” These women refused to see one more kupuna arrested that day—asserting mana wahine, the integrity and courage to act on a divine, grounded kuleana (responsibility, privilege). After an exhausting standoff, the police were called away and one kupuna proclaimed, “the mountain is safe for one more day!”

The crowd of several hundred quickly broke into song, soon rejoicing in Liko Martin’s classic anthem, “All Hawaiʻi Stand Together.” These first episodes of a Kanaka uprising incited the Lāhui (our people and nation) to “ʻōnipaʻa kākou”—to be steadfast in defense of our ancestral places. The Lāhui answered the following weekend when some 4,000 people from across the islands arrived at Puʻuhonua o Puʻuhuluhulu to share in this renewal of aloha ʻāina­—the onto-genealogical ethic of caring for land and water as cultural value, political strategy, and ʻike kūpuna (ancestral knowledge). These ways of being have guaranteed our survival to this day and in the face of over a century of settler colonization under US occupation. Indeed, these kiaʻi (the protectors) have barricaded the summit access road in an effort to stop the Thirty Meter Telescope, but our struggle is also about the future of our people, our Lāhui.

When I reflect on my two weeks at Puʻuhonua o Puʻuhuluhulu as part of this collective kūʻē (resistance) and encampment, the main takeaway for me is that our Lāhui is in good hands. Our ʻōpio (young people) know who they are. Their keiki (children) and moʻopuna (grandchildren) will grow to understand their kuleana and what it means to aloha ʻāina—to love and protect our ancestral homelands. And they will do this through non-violent direct political action when necessary because it is a tradition among Hawaiians. Kānaka fight for what is pono (just, ethical, right).

The state of Hawaiʻi’s Department of Land and Natural Resources and the University of Hawaiʻi have for years mismanaged the summit of Mauna Kea. The data is readily available to anyone with access to the Internet. In the ten years I have researched and written about the politics of telescopes on Mauna Kea, I have come to understand that state law operationalizes settler coloniality. What this means is that it is through law that land grabs are performed and justified. It is through law that Kānaka ʻŌiwi are rendered illegitimate, unreasonable, criminal, and irrational in defending storied and sacred places. It is through law that ʻŌiwi are legitimate only insofar as we remain frozen in the past: our practices, ancestral places, and structures are worthy of protection only when established before arbitrary dates over a century past, as determined by contract archeologists and settler lawmakers. It is through law that our rights to cultural praxis in specific locations remain bound to impossible criteria of demonstrable, seamless continuity and genealogical descent. Kanaka indigeneity is under constant threat because it is what haunts the settler state. Indeed, just as science is often said to be the voice of reason, law is imagined to be concerned only with discerning truth from appearances. Yet, as this decade-long struggle shows, law also functions to dispossess, contain, incarcerate, remove, discredit, vilify, and trivialize Hawaiians. Law does so with impunity because settler society teaches us that law, like science, is indifferent to politics, neutral, and value-free. Mainstream society and western education lead us to believe the “rule of law” exists outside of culture, as if there are not actual people wielding it like a weapon. But, it is through law the colonization of our ʻāina continues.

In the period of a week, Governor David Ige declared and then removed an emergency proclamation—the legal measure by which he authorized himself the power to direct US National Guard troops to remove the kiaʻi. He reversed course, but the governor’s actions demonstrate how the state will grope for any tool or tactic to disqualify and manage Kānaka ʻŌiwi, to assert its own legitimacy. As a land-based people with historically situated claims to land, sovereignty, and independence, ʻŌiwi pose the single greatest threat to the settler state. Rooted in aloha ʻāina, Kanaka indigeneity fundamentally contradicts the state’s flaccid environmental laws.

It is only through a complete perversion of the very concept of ‘conservation’ that an 18-story, 5-acre industrial development project could be sited in the middle of a pristine, undeveloped, fragile ecosystem where dozens of cultural and historic properties are known to exist. That a $1.4 billion observatory slated for construction in a “conservation district” could ever be imagined as “compatible” with the principle of conservation is a gross corruption of the very idea of land stewardship. But welcome to Hawaiʻi.

While settler state law provides a buffer between the scientific beneficiaries of US imperialism, TMT investors, astronomers, and advocates take up the ideological rhetoric of suggesting their giant telescope would provide “a window to the edge of the universe” and the means to “discover new worlds.” Without a critique of colonialism, the rhetoric can be persuasive. Before the project even has broken ground, the data TMT promises to gather is presented as universal knowledge, imagined as benefitting “all of humanity.” Clearly, however, this picture evacuates the Native subject from its vision, and reproduces imperialist hierarchies of the human. Such notions of Indigenous peoples as sub-human have historically served to rationalize genocidal violence. This is how Kānaka ʻŌiwi today are cast as irrational obstructions to progress, anti-science, and religious fundamentalists. But with a critique of empire, these tropes collapse.

In the current iteration of what Haunani-Kay Trask once called “the modern Hawaiian movement,” we are following the traditions of our kūpuna (ancestors). We are participating in a continuum of peaceful resistance to the genocidal logics of empire through practices rooted in ceremony and ancestral knowledges. These ways of being link us to the land, the akua (gods), and each other. Although we are certainly defending our sacred mountain from industrial development, we are also fighting for what is pono. Our kūpuna prioritized us and our futures by committing their lives to perpetuating our language, culture, and history. And this manifests in hula and hoʻokupu (offerings, tributes), the protocols and pule (prayers) observed three times a day on the access road.

Like our mōʻī, our kūpuna avoided armed resistance—although armed resistance would have been an appropriate response to Bayonet in 1887, the US military invasion in 1893, the gross land grab masquerading as “annexation” in 1898, or the 40 years of military target bombing of Kahoʻolawe through the 1970s, and too many others to enumerate. They chose not to counter violence with violence, but instead to pursue a more radical form of resistance altogether: the cultivation of our Lāhui. They maintained pono by preserving our worldviews and teaching us knowledge of ourselves. They devoted themselves, not to capitalism or settler strategies of land, labor, and resource exploitation, but to aloha ʻāina. They committed, not to shortsighted logics of an extractive culture of consumption and excess, but to ceremony. When confronting the institutions designed to eliminate Native peoples, our kūpuna provided their beloved kamaliʻi (descendants) the education necessary to insure our survival through enduring struggle and pono.

When they sought bachelor’s degrees in the 1950s and ‘60s, it was so that our mākua (parents) were positioned to earn master’s degrees and JDs throughout the 1970s and ‘80s. In turn, our mākua provided the conditions for my generation to achieve doctorate degrees throughout the 1990s and 2000s. We are witnessing this uprising at Mauna Kea and around the islands because our kūpuna taught aloha ʻāina. Is it any wonder we are standing in defense of our sacred places? Our people also have generations of experience organizing large events, labor, and masses of people. Every Kanaka family knows how to throw a first year baby lūʻau, a 16th birthday celebration, or a graduation party for hundreds. We have cultivated knowledge of laulima (cooperation), how to live on pāhoehoe (smooth lava rock) and ʻaʻā (rough lava rock), and how to accept kuleana when something needs to get done. This is what the camp and community at Puʻuhuluhulu is showing the world and each other.

What we have seen in this three-week long peaceful demonstration at Puʻuhonua o Puʻuhuluhulu is remarkable. But it is also simply what Kānaka ʻŌiwi do. We defend our ancestral places, behave in kapu aloha to maintain pono, and we kūʻē until the very last aloha ʻāina. I am confident the Lāhui is in very good hands.

Iokepa Casumbal-Salazar is a Kanaka ʻŌiwi living in the ancestral homelands of the Cayuga, working as an assistant professor of Indigenous Studies in the Center for the Study of Culture, Race, & Ethnicity at Ithaca College, New York. His research and book project examine the politics of Indigenous resistance to telescope construction on Mauna a Wākea.