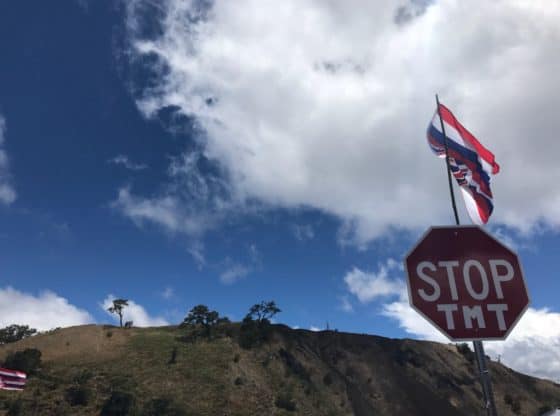 While at tremendous sacrifice to the revered Kupuna (elders) who were arrested yet continue to block the access road along with the thousands of other kia‘i (protectors) thriving at Pu‘uhonua o Pu‘uhululu, the resurgence of Hawaiian ways of knowing, being, and responding to the ongoing history of U.S. occupation is historic, truly transformational, and offers a glimpse of a beautiful future during unsettling times. As Hawai‘i state leaders play a zero-sum game that disregards the growing numbers of people united in protecting sacred Mauna a Wākea from further desecration by the Thirty Meter Telescope (TMT), kia‘i continue to inspire and further demonstrate to all of Hawai‘i, and the world, the power of Indigenous movements to create meaningful alternatives to an unsustainable U.S. colonial system.

After more than a hundred years of the U.S. occupation of Hawai‘i, the United States has proven themselves, time and time again, as incapable of protecting the resources and relations that sustain life in the islands. And it is, time and time again, Kanaka ‘Ōiwi land-based movements that have educated the state and general public about the impact of such harm and offered another way forward. Whether we are talking about water diversions from watersheds that replaced Hawaiian foodways with industrial sugar production and aided the introduction of capitalism in the islands; an industrial food system that imports 85-90% of its food; the military’s continued use of Hawaiian lands for live-fire training; the attempts to genetically modify the taro plant (Hāloa the elder sibling of Kanaka Maoli); or the continued use of Hawai‘i for herbicide and pesticide testing by multinational corporations, there have been Native peoples resisting and educating at nearly every moment of environmental degradation, though this is far from a comprehensive list.

And yet, much of this transformational power is lost when one listens to TMT proponents who cast the issue simplistically as one of “culture versus science.” Indeed, this false binary, one that pits Hawaiian knowledge against Western science and not only paints the former as inferior but the latter as indispensable to human progress, is not new but has been repeatedly levied against Hawaiians. For instance, this conflict played itself out on an international stage in 1893, long before TMT, and was used as justification for the overthrow of an independent Hawaiian nation. Understanding the power of such tropes matters because Hawaiians can be made to suffer the consequences of such racist characterizations against them.

Only ten months after helping to lead the overthrow of the Hawaiian Kingdom, Lorrin A. Thurston was in Chicago at the 1893 Columbian Exposition. Thurston, a third-generation settler of some the first American missionaries to Hawai‘i, was managing his “Kilauea Cyclorama,” a five story high and 400 foot wide landscape painting of Kīlauea volcano, designed to encircle the viewer and give the impression of standing in the actual crater. Placing large American flags at the top, Thurston used his cyclorama as a kind of advertisement for annexation.

Thurston’s “Kilauea Cyclorama” represented Hawai‘i as a place where American civilization and Native savagery met. Keeping in line with the idea that “primitives” were at the very beginning of human progress, Hawai‘i, as represented through Kīlauea volcano, was a geological symbol of the absolute beginning stages of development, a place on earth at its most primitive state. At the same time, it was done through the most modern form of western technological entertainment in existence, the cyclorama. Considered to be all the rage in America, cycloramas or panoramas, are the predecessor to motion picture film and movie theaters. A top the cyclorama was a statue of Pele, described as the “Goddess of Fire,” and was said to be the second largest statue at the exposition.

The landscape painting of Kīlauea featured a geologist walking and studying within the crater, thus juxtaposing two competing knowledges about one location. As a people who were seen as having a more advanced knowledge over the crater, settlers could argue that they were more deserved over that space. This is exactly the same tactics that proponents of the TMT use to dismiss Hawaiians as anti-science. It is important to understand, however, that this is not two competing knowledges so much as two representations set by the same racist imagination. Thurston’s fictive depiction of Hawaiian culture as “anti-science” allowed him and other settlers to render themselves as the masculine embodiment of scientific reason. In fact, the initial plans for the Hawai‘i exhibit by Kānaka ‘Ōiwi themselves at the Columbian Exposition, prior to being usurped by Thurston, were designed with science in mind. Historian Kealani Cook points out how the Hale Nauā, a royal society that reflected a “new pro-Native national culture,” were deeply aware of racist imaginings of Hawaiian people and planned to win the public over at the 1893 Columbian Exposition via sports, culture, and contributing to an international movement for science. Cook explains, “the message the Hale Nauā intended to send was clear; Hawai‘i, while proudly retaining an explicitly Native culture, was still proficient in the cultural forms of Europe and America.”[i]

The false representation of Pele, combined with the science of geology, sought to trivialize Hawaiian cultural associations with place. In fact, Thurston and his geologists often spoke of geology as a war between civilization and the female power of Pele. Thomas Jaggar, an early geologist who was funded by Thurston, would eventually name his book, Volcanoes Declare War, in which he writes about his and Thurston’s role in the 1935 U.S. Army’s dropping of six tons of bombs on a lava flow from Mauna Loa.

The portrayal of Pele in the cyclorama seemingly demanded control of an uncontrollable Native woman. This here, links tightly with how the overthrow of Lili‘uokalani was described in January of 1893. Thurston described Lili‘uokalani as a “dangerous woman” who was overthrown for attempting to promulgate a new constitution, one that would restore a system of checks and balances and full political vote to Kānaka ‘Ōiwi. For this, Lili‘uokalani was characterized as dangerous to “American lives and property,” which seemingly justified the landing of U.S. marines to occupy Hawai‘i. History repeated itself in 2019 when, describing the Mauna Kea protectors as creating a dangerous situation, Governor David Ige used Hawaiian opposition to the TMT to justify his Emergency Declaration, not unlike Thurston’s fabricated emergency and characterizations of Lili‘uokalani.

Despite pro-TMT supporters who paint the movement to protect Mauna a Wākea as anti-science or as coming at the expense of non-Hawaiians, it is the Mauna Kea movement in Hawai‘i that is to the greatest benefit of all of Hawai‘i’s people. Together, they are redefining what is even imagined as possible as they have organized numerous forms of mutual care at the pu‘uhonua relating to education, childcare, medical care, ride shares, waste/recycling, and food. Those protecting the mauna have also forged powerful connections with other global movements who similarly understand the urgency to protect the very conditions that sustain life on this planet. Whether we are talking about Standing Rock and the protection of water, Guåhan and the protection of sacred places from military live-fire training, the exposing and ousting of Puerto Rico governor Ricardo Roselló, not to mention other global movements against the extrajudicial killings in the Philippines, land struggles in Aotearoa, and movements opposing the genocide committed against Palestinians by Israel and the right to speak out against such murders without being slandered as anti-semitic—this is the new normal of our times, as governments continue to prioritize a form of economic development that is militarized and intensely antilife.

But the unearthing of buried histories regarding Hawai‘i’s occupation by the United States reveal how the state’s present authority was taken historically by illegal force. What the settler state has done with this power is revealed in the present and possibly future realities of rising sea levels, environmental degradation, increased militarism, and growing social and economic discord caused by other acts of desecration. A hundred years after its creation, the “cyclorama of Kilauea” is irrelevant, just as the TMT will be, but the issue of desecration and occupation remain ever present.

The Thirty Meter Telescope epitomizes the failure of settler colonialism, which has the intellectual capacity to peer into the universe, but lacks any wisdom to protect life on this planet. July 2019 has been determined to be the hottest month ever in recorded history. The longer it takes for settler states to deoccupy, I believe, the more urgent climate crisis will become.

Dean Itsuji Saranillio is from Kahului, Maui and is an associate professor in the Department of Social and Cultural Analysis at New York Univeristy. His book Unsustainable Empire: Alternative Histories of Hawai‘i Statehood (Duke University Press, 2018) contextualizes the movement in Hawai‘i for U.S. statehood within a longer history of U.S. settler colonialism and empire. He was at Pu‘uhonua o Pu‘uhuluhulu on Mauna Kea in the tumultuous first week it was established.