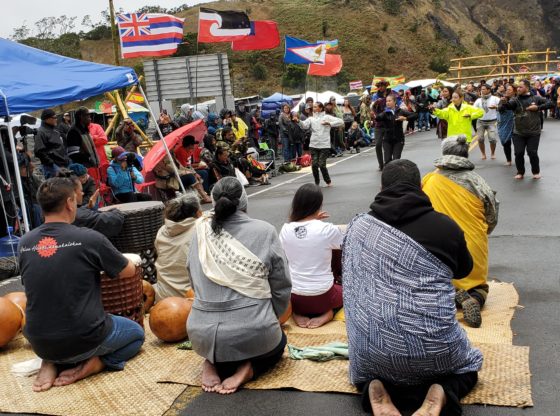 The Lāhui Hawaiʻi is rising up.  By the hundreds and thousands, at Mauna Kea, in Honolulu, on Kauaʻi, Molokai, and Maui, in Las Vegas and Berkeley, in Aotearoa (NZ) and more places too numerous to mention, Kanaka Hawaiʻi are rising up as a people and a nation.  ʻĪmaikalani Winchester has called this a huliau: like an immense ocean current that creates change, a turning point.

The specter of irrevocable damage to Mauna Kea, and more immediately gut-hitting, the sounds and images of armed police in bulletproof vests dragging beloved kūpuna (elders) acting as kiaʻi (protectors) of the Mauna out of their chairs and wheelchairs is the latest catalyst for this great huliau.  Not long after those arrests of kūpuna, the police threatened to pepper spray the protectors, including the kūpuna.  A great mass of wāhine (women) surged in front of the kūpuna, linked arms, and formed a protective barrier that the predominantly male police force was reluctant to be seen harming.  This is reminiscent of our god, the woman Haumea, who protected her man, the male god Wākea, against the male fighting forces of an ill-intentioned aliʻi (chief).  Haumea manifested as hundreds of women, each with a kukui nut in her hand.  Armed with this symbol of intelligence, she defeated those forces.

The planned construction of the Thirty Meter Telescope (TMT) is a project that has had to be bolstered by court cases, waivers of environmental protections, and violent state action against kiaʻi armed only with aloha, prayer, intelligence, and sunscreen, as Noelani Goodyear-Kaʻōpua has put it.  Hawaiʻi’s economy has run on three engines since the US takeover despite the expressed objection of Kanaka in 1898:  tourism, militarism, and construction.  The third is also fuel for the first two engines.  Construction is an inherently destructive industry.  It requires damaging the environment as well as often disturbing sacred sites and burial sites.  It provides temporary jobs.  Once one job is done, crews have to move on to the next.  Like a drug addict, the state government needs its fix of revenues from this industry.  Like drug addicts, state politicians rationalize the constant building with the temporary high of jobs for the people.  Anyone can see that this is inherently unsustainable, especially on islands.

Since the beginning of telescope construction on Mauna Kea, Kanaka have tried to protect the Mauna through the courts, media, and nonviolent direct action.  People are protecting the Mauna in many different ways and in many different locations and via various venues.   The most visible is the direct action of blocking Mauna Kea Access Road.  Across the highway is Puʻuhonua o Puʻuhuluhulu. A puʻuhonua is a place of refuge, a place of peace and safety.  It was consecrated and declared by the Royal Order of Kamehameha I, an organization of men with recognized chiefly genealogies, and the only order created by royal decree to have survived over a century of US colonization.  The mayor of Hawaiʻi Island has voiced his respect for the puʻuhonua and, so far, no law enforcement has attempted to sweep it.  At the Puʻuhonua, kiaʻi and supporters have built a kūlanakauhale, a village, that includes kitchen and supply tents, and the Puʻuhonua o Puʻuhuluhulu University where kiaʻi (who include kumu of traditional arts, teachers, and professors) give classes.

In Honolulu, on the island of Oʻahu, kiaʻi have organized demonstrations at the state capitol, demanding an end to state violence and threats of violence against kiaʻi on the mauna.  We have also confronted University of Hawaiʻi President David Lassner, because the university holds the lease for the land where the TMT is planned, and members of its Institute for Astronomy are involved.  On the day the kūpuna were arrested, professors, staff, and students gathered to demand that Lassner act to end the violence.  We were joined by ʻĪlioʻulaokalani, the political action group of kumu hula (master hula teachers) and their hālau (performers and students), who led pule and conducted hula ceremony.  Immediately afterwards, Kumu Hinaleimoana Wong-Kalu and other members of ʻĪlioʻulaokalani led a freeway slowdown and a circling of the Honolulu international airport. This action had a positive effect on the Mauna, as police there realized that they were being watched and their violence against kūpuna and threats against wāhine were being powerfully demonstrated against on Oʻahu.

Soon, all over the islands, flags, banners, and signs sprouted up on cars and lanais.  Hundreds of people in different locations draped flags and kū kiaʻi mauna banners over highway overpasses, and are still doing so daily.  In country and urban areas, on all the islands, people are holding signs on roadways.

The kūpuna along with kumu hula conduct ceremony three times every day.  It begins with pule to our akua and ʻaumākua (deities) and kūpuna o ka pō (kūpuna who have passed).  Hundreds of people gather for these collective ceremonies.  Kumu hula offer ceremonial hula.  Then the kūpuna, with the help of the kumu hula, receive those who are presenting hoʻokupu.

The power of this pule is immense and observable.  It brings us together as we collectively speak to the sacred Mauna and the deities and our ancestors.  Those deities and ancestors answer our pule every day.  We have all witnessed sudden blankets of mist, sudden clearings, and rainbows of very rare kinds in response to different kinds of pule.  As a whole, we feel strong knowing we have a daily connection and conversation with our deities.

As powerful is aloha.  Early on in this movement, kiaʻi instituted kapu aloha.  That is a rule and guiding principle that means treat everyone, including opponents, with aloha.  As Manu Kaʻiama said to the University of Hawaiʻi Board of Regents on August 2, “You have seriously underestimated the power of aloha.”  Whenever the state has come with violence or threats of violence, they are met with aloha.  After Governor David Y. Ige declared a state of emergency in order to deploy the National Guard and more police departments, he was welcomed with aloha when he visited the kūpuna on the mauna.  Afterwards, he abdicated his responsibility and delegated action on the blockade and the Puʻuhonua to Hawaiʻi Island Mayor Harry Kim.  The police themselves were given aloha in response to threats and arrests.  It is not easy for all kiaʻi to maintain kapu aloha when threatened, but it is the most effective means for maintaining the blockade and the Puʻuhonua, and for preventing bloodshed.

We are a nation rising.  On the Mauna, we see Kanaka life:  many people are speaking our language, ʻōlelo Hawaiʻi; our pule are collectively sent up three times a day in ʻōlelo Hawaiʻi; and the saying, “ʻo ke aloha ka mea nui” (aloha is the most important thing), is the guiding principle.  Kamehameha III proclaimed, upon the return of the nation’s sovereignty in 1843:  Ua mau ke ea o ka ʻāina i ka pono, which has been translated many ways, but for today, I can paraphrase what I heard from ʻĪmaikalani Winchester, “the sovereignty of our land continues in justice.”  The huliau, the newest great wave of Kanaka resurging and living as Kanaka, forever protecting our land, has begun.

Noenoe K. Silva (Kanaka Hawaiʻi) is from Kailua, Oʻahu.  She serves as professor of Hawaiian and Indigenous Politics and Hawaiian Language at University of Hawaiʻi at Mānoa.  She is the author of Aloha Betrayed: Native Hawaiian Resistance to American Colonialism (2004) and The Power of the Steel-tipped Pen: Reconstructing Native Hawaiian Intellectual History (2017).