Forum 3.3 // On Common Ground: Concentration Camps in the ‘Home of the Free’ at the Southwest Border and in History by Hana C. Maruyama 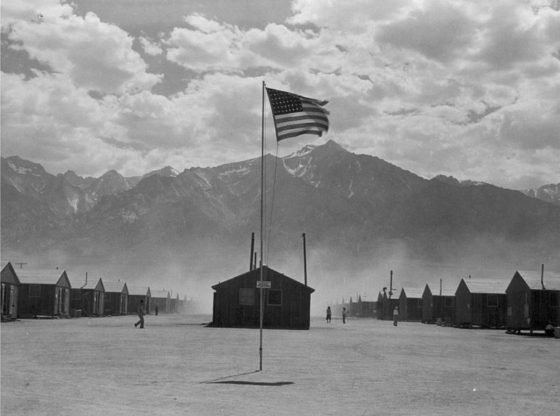 “The fact that concentration camps are now an institutionalized practice in the home of the free is extraordinarily disturbing,” Congresswoman Alexandria Ocasio-Cortez stated in a June 17 video on migrant detention centers at the border. Congresswoman Liz Cheney dismissed these concerns, focusing instead on Ocasio-Cortez’s use of the controversial term “concentration camp”: “Six million Jews were exterminated in the Holocaust. You demean their memory and disgrace yourself with comments like this.”

I’d heard similar debates before. Starting in 1942, 120,000 people of Japanese ancestry were imprisoned in 10 “relocation centers,” which Franklin D. Roosevelt himself called “concentration camps” on more than one occasion.[1] By definition, the term is accurate, but Japanese Americans have often been told not to use it. Notably, the Ellis Island Museum in 1998 refused to host the exhibition “America’s Concentration Camps” unless the Japanese American National Museum changed its name, conceding only when Jewish and Japanese American community members agreed upon a definition. More than a decade before today’s controversy, Alice Yang aptly explained the prevailing rationale: “During World War II, officials and commentators could say Japanese Americans were confined in ‘concentration camps’ without evoking images of Nazi atrocities. I don’t think this is true today.”[2]

Ocasio-Cortez didn’t mention the Holocaust; Cheney leapt there nonetheless. Cheney represents the state whose governor in 1942 threatened “Japs hanging from every pine tree”—Wyoming. Cheney hasn’t visited Heart Mountain, the site in north-west Wyoming where my grandmother and nearly 14,000 other people of Japanese ancestry were imprisoned. If she had, she might have seen this debate on the walls of its museum. She might have noted parallels between migrants today and early Asian immigrants, brought over by corporations as cheap labor only be accused of “stealing” jobs. When then-presidential candidate Donald Trump accused Mexican immigrants of “bringing crime,” Cheney might have remembered how Japanese Americans were also criminalized for their perceived foreignness. She might have thought of Heart Mountain, when she heard about migrants being sent to concentration camps.

The term “concentration camp” feels blasphemous in reference to almost anything but the Holocaust. I don’t like the term. I am always conflicted when using it—I don’t know a Japanese American who isn’t. I have no desire to dismiss Holocaust survivors’ trauma or conflate the two experiences. There is no equivalence between them. Nazi Germany used “concentration camp” as a euphemism for the forced labor, inhumane living conditions, and genocide to which they subjected Jewish people and other persecuted minority populations. Germany had concentration camps, but the violences committed at many exceeded those of the concentration camp—they became forced labor and death camps. Calling these sites “concentration camps” masks the true scope of what occurred there.

Raymond Okamura writes, “Nazi Germany was not unique in the use of deceptive terminology for propaganda purposes.”[3] We recognize “evacuation” and “relocation” as euphemisms for Japanese Americans’ incarceration, but even “internment,” as Roger Daniels explains, “is a well-defined legal process by which enemy nationals are placed in confinement in time of war.”[4] Some 8,000 Japanese immigrants were interned. But at the War Relocation Authority (WRA) camps, where 120,000 were imprisoned, two thirds were American citizens—not “enemy nationals”—and the other third were “aliens ineligible for citizenship” due to naturalization policies targeting Asian immigrants. The pernicious stereotype of the foreigner still sticks to Japanese Americans.[5]

FBI Director J. Edgar Hoover stated, “It should be remembered that Japanese-American citizens cannot be placed in internment camps.”[6] Why? An internment camp would be subject to the Geneva Convention. But its protections could be denied to Japanese Americans because they were not internees. WRA policy stated, “The WRA has never considered that the Geneva Convention is applicable anywhere except, possibly, at Tule Lake.”[7] Far from a “legal process” confining “enemy nationals,” the treatment of Japanese Americans was “lawless,” Daniels suggests.[8] Executive Order 9066’s flimsy legality was shattered in 1983 when lawyers found the U.S. Solicitor General’s Office had withheld pre-war reports showing Japanese Americans posed no military threat. In 2018, the Court repudiated the case—as an aside while upholding the Muslim Ban.

Without “concentration camp,” we don’t have a term to describe these places. Fort Snelling proves the wider stakes of this discussion. My great-uncle, drafted while his family was still behind barbed wire, trained at Fort Snelling. Did he know it had served as a concentration camp for Dakota following the U.S.-Dakota War? It too has been called an “internment camp,” though several hundred died there.[9] If “internment” perpetuates stereotypes of Japanese American foreignness, what does it mean to use that term for indigenous peoples? Dakota community members have long argued it was a concentration camp but “internment” persists—it’s even on interpretive panels at the site.

The terms are not interchangeable: “internment” fails to capture the lawlessness of these institutions. WRA sites were concentration camps not just because of what the State did but because of what it could have done. Japanese Americans weren’t treated as badly as Jews in Europe, Japanese prisoners of war, or “comfort women”—but they had little assurance they would not be treated that way, when they were surrounded by armed guards, with no idea where they were going, when they would see family members again, whether they would return home. Marion Tsutakawa Kanemoto worried her mother would be deported. George Morihiro recalls, “I even thought … maybe they’ll take us out in the desert and shoot us.” Their only protection was the State’s willingness to police itself, as the cases of individuals murdered by guards demonstrate. James Hatsuaki Wakasa was supposedly trying to escape when he was shot five feet inside the fence, his body positioned as if he had been walking parallel to it. Shoichi James Okamoto’s murderer was punished—with a $1 fine for the “unauthorized use of government property,” the bullet.

Today’s sites fit eerily into wider patterns of incarceration of people of color and indigenous peoples in this country. Like their predecessors, U.S. Customs and Border Protection (CBP) and Immigration and Customs Enforcement (ICE) use the lack of clear oversight to render already precarious populations even more vulnerable through racial profiling, concentration, and segregation. Lest someone try to call these places internment camps by reminding us that those imprisoned there are not citizens, let us remember that they are not the “enemy” either. They are human beings.

Borders and concentration camps separate us from them. But the words we use, the ones we refuse, and the euphemisms we hide behind also divide us. We differentiate their concentration camps from our camps-that-cannot-be-called-concentration-camps. We erect walls between Mexico and the U.S.—and borders between past and present. In “unequivocally rejecting efforts to create analogies between the Holocaust and other events,” the U.S. Holocaust Memorial Museum strengthened these borders. This, as scholars responded in a call for the statement’s retraction, “makes learning from the past almost impossible.” This zero-sum position suggests that we can’t analyze historical parallels while being attentive to difference.

If we recognize the reverberations of these sites across historical moments, we will see the central role incarceration has played in U.S. nation-building. In 2018, U.S. officials proposed to use Little Rock Air Force Base, which formerly housed Rohwer Japanese American concentration camp in Arkansas, as a detention facility for children. In December 2018, a 7-year-old girl from Guatemala died in CBP custody while being transported to Lordsburg Border Patrol Station in New Mexico. Lordsburg was the site where two physically disabled Japanese immigrant elders were shot during World War II. Earlier this year, attendees of a pilgrimage to Crystal City, Texas protested at Dilley Detention Center, 45 miles down the highway. Many Japanese Peruvians were imprisoned there after having been forced from their homes by the Peruvian and U.S. governments and declared “illegal aliens” so that they could be deported to Japan—a country many had never been to.[10]

Recently, Tsuru for Solidarity, a Japanese American activist group, joined a coalition of organizations—including Oklahoma: AIM Indian Territory, Dream Action Oklahoma, Black Lives Matter Oklahoma City, and Indigenous Environmental Network—at Fort Sill. A potential migrant detention facility, the fort formerly served as an internment camp for 700 Japanese immigrants. It is where Kanesaburo Oshima, under the stress of separation from his family and fear of deportation, was shot trying to escape, as fellow incarcerees pleaded, “Don’t shoot—he is insane.” Apache prisoners of war were imprisoned there from 1894 to 1914. The fort served as an Indian boarding school from 1871 to 1980. These “schools” used coercive, carceral tactics to remove children from their parents and confine them. On July 24, after increased attention garnered by the protests, Senator Jim Inhofe announced that the plans to use Fort Sill had been put on hold. These activists, many from historically marginalized groups, remind us that these sites are on common ground—they bring the past into the present and show us why history is relevant today.

So, when we see people being put in concentration camps again, we should remember the wider history of incarceration in this country and beyond, as well as the histories of the migrants imprisoned in them. Many are indigenous to this continent. Their ancestors crossed these lands long before the U.S.-Mexico border existed. Now, they “are forced to sleep on the floor in overcrowded facilities, without access to adequate healthcare or food, and with poor sanitation conditions,” the United Nations High Commissioner reported.

The stakes here too are life and death. At a May 2019 rally, Trump asked, “How do you stop these people [migrants]?” An attendee replied “Shoot them!” Trump laughed off this threat with a joke. When our leaders refuse to condemn threats of violence, it should come as no surprise that some interpret this as a license to kill—as became tragically clear on August 3, 2019, when an anti-immigrant shooter opened fire in a Walmart frequented by Latinx community members near the U.S.-Mexico border. And we cannot dismiss these acts as “lone wolf” exceptions when people are also dying in federally-run concentration camps: 24 have died in ICE custody during the Trump Administration. The Los Angeles Times has recorded at least 9 deaths in CBP custody since October 2018.[11] Six migrant children are dead. Neglect and indifference can kill too.

Still, some are more bothered by the term concentration camp than by the fact of their existence. “Concentration camp” is more than a rhetorical exercise, more than a historical analogy. It makes us reckon with our past and confront our present. How can we say we have learned from the past if we can’t even call these places what they are?

Hana C. Maruyama is a Ph.D. candidate in American Studies at the University of Minnesota. She is a descendant of the Jerome, Heart Mountain, and Gila River Japanese American concentration camps. Her dissertation project explores the intersections of Japanese American incarceration and U.S. settler colonialism from a lens grounded in American Indian and Indigenous Studies and Asian American Studies. She formerly worked for the Heart Mountain Interpretive Center, the Smithsonian Asian Pacific American Center and American Public Media’s podcast Order 9066.

[5] Recently, a member of the Military Police—the same branch of the military that “guarded” the camps during the war—berated a former incarceree who was protesting migrant detention. He shouted, “What don’t you understand? It’s English. Get out.” He has now been suspended for impeding their right to protest, but little attention has been paid to the racism implied in his remarks.

[6] Herzig-Yoshinaga, Aiko. “Words Can Lie or Clarify: Terminology on the World War II Incarceration of Japanese Americans.” 23. Even General John DeWitt—who infamously said “A Jap’s a Jap”—acknowledged, “Internment camps … are not related to the evacuation program.” See Okamura, “The American Concentration Camps,” 99.

[11] The CBP does not release a total count of deaths in its custody.

Forum 3.2 // The Racist, Sexist, Classist, and Homophobic Past of the “Public Charge” Clause by Julio Capó, Jr.
Forum 3.4 // ‘3 Mexican Countries’: When All Latin American Migrants Become Mexicans by David Hernández