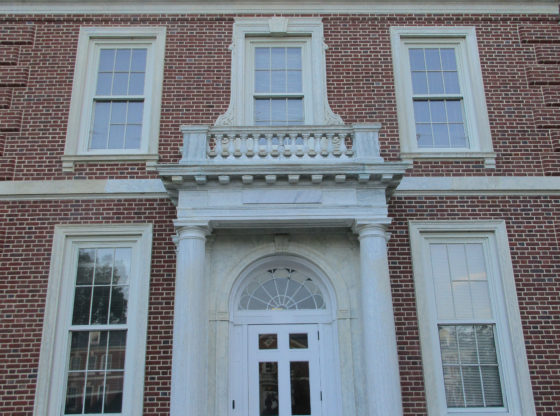 Classroom Building at Duke University, after Carr was removed from the building. Photo by Anderson Hagler.
Forums,From Carr to Classroom |

This piece was written in Durham, North Carolina for a forum about Duke University, an institution occupying land that has long served as the site of meeting and exchange amongst a number of Indigenous peoples: historically, the Shakori and Catawba peoples. Eight tribes currently reside in North Carolina, including the Coharie, Lumbee, Meherrin, Occaneechi Saponi, Haliwa Saponi, Waccamaw Siouan, Sappony, and the Eastern Band of Cherokee Indians.

On February 12th, 2014, I entered a wood-paneled lecture hall at the Alabama Museum of Natural History, looking to fulfill a requirement for my freshman course on evolution at the University of Alabama. The date is easy to remember because it was Charles Darwin’s 205th birthday, and because the lecture changed the course of my life. For just fifteen minutes, Professor Erik Peterson spoke about the evolutionary ideology of Josiah Clark Nott, a violent scientific racist for whom the University’s Honors College is named. The simultaneous revelations that scientific knowledge could be weaponized to promote white supremacy, and that one of my classroom buildings rewarded that weaponization, fascinated and enraged me. On a whim, I became a history major and began to learn more about both of these facts in classes on southern history, civil rights, evolutionary theory, and the history of medicine. I experienced a whirlwind unlearning that showed me racism’s visible impact on the environments we inhabit everyday: not only segregated bus stations and schools, but hospitals, streets, and parks across the country.

Five years later, I am studying medical history in a doctoral program, and Alabama’s Honors College is still housed in Nott Hall. A metal plaque and marble inscription bearing his name remain there despite the best efforts of countless students, faculty, and community members to remove them. The University’s administration and the Alabama state legislature have served as immovable obstacles in these efforts by complicating the renaming process and, for more than four years, making renaming illegal. Like so many local renaming conflicts, the fight over Josiah Clark Nott has garnered little national or even regional attention. Its insularity reflects the limited perspective of our ongoing national conversation about monuments and memorialization: substantive change on this issue can only come from a more fundamental reconsideration about who and how we honor in the United States.

When I left Tuscaloosa for my graduate program, I entered another community experiencing its own reckoning with monuments. For many in North Carolina’s Research Triangle, conflict over memorialization marked the summer of 2018, a period when students and community activists dedicated months to demonstrations urging the removal of Silent Sam, a Confederate monument placed prominently on the campus of the University of North Carolina. Purportedly a monument honoring all Confederate soldiers, Silent Sam has been a target of protests from students of color and other community activists for decades, especially due to the contents of a speech delivered at the monument’s dedication in 1913. At the event, Durham tobacco magnate Julian Carr bragged about his history of racially-motivated violence. This speech, activists argued, revealed that Confederate memorialization laid racist violence in concrete, promising white supremacy’s reign in the past, present, and future. In the wake of nationwide protests about Confederate memorialization, these arguments garnered increased support and public attention, leading to that summer of demonstration, which culminated in the arrests of multiple students and the toppling of the statue on August 20, 2018.

As a student in Duke University’s Department of History, housed in a building named for Julian Carr, I thought it urgent that my Graduate Student Association publicly express solidarity with Chapel Hill’s student activists. Action felt especially important given the involvement of graduate student activists in the Silent Sam demonstrations. Maya Little, a doctoral student in UNC’s department of history, was threatened with expulsion, subjected to honor court, and sentenced to community service for their work to bring down a monument premised on violence against black people. This case illustrates the precarity of graduate student life for marginalized students, despite professed institutional commitments to equity. A group of faculty evidently felt similarly about the need for solidarity between UNC’s student activists and Duke’s Department of History, and came together to craft a statement of their own. The University responded quickly to faculty demands, forming a university-wide committee to discuss the possible renaming, of which I was a part. At the recommendation of the committee, the Carr Building reverted to its original name, the Classroom Building, in January of 2019. Construction crews arrived to remove Carr’s name in April.

Renaming efforts rarely succeed. As such, it is important to acknowledge the work behind positive strides made in the Triangle concerning Confederate memorials and monuments. The marble slab placed over Carr’s name is a victory for activists who pushed the conversation about race, history, and memory into public consciousness nationwide. It is a victory especially for those students and community leaders in Chapel Hill who worked for so many years to bring Carr’s life and legacy into question in North Carolina. It is a victory because Carr’s name actively shaped social categories of belonging and exclusion, work that is no longer etched into the building itself.

Yet the absence of Carr’s name from Duke’s campus achieves only the bare minimum in repairing the historical inequities still embedded in the fabric of communities, inequities evident in the exclusion of Durham’s Black community from conversations about renaming: these discussions were conducted internally at Duke and held at campus sites that are inaccessible for most Durham community members. Elements of these conversations speak to a demand for deeper, broader discussion and education about history and memory. For example, both within and beyond Duke’s Renaming Committee, Carr’s donation of land for East Campus became a barrier to the removal of his name from the site. This conflict speaks to a lapse in historical education, a need for larger discussions that embed memorialization in local and national historical processes. Carr acquired his land and wealth through racist, exploitative labor systems. He inherited stolen land and stolen wealth from a slaveholding father and built a larger fortune in tobacco mills filled with sick, overworked, and underpaid workers. His land donation enabled Further, philanthropy like his was the bedrock of a postsecondary education system accessible only to the people that Julian Carr and his peers deemed worthy of learning: typically, wealthy whites.

As an historian of medicine in Native America, renaming Carr Building made it clear to me that the national conversation about memorialization remains confined to the southern history of slavery and Jim Crow, reproducing liberal discourses which construct southern sociopolitical history as the container of America’s racist past and present. Public conversations about history and memory must widen and deepen to consider what it means to mark a stolen continent with the names of individual people, and to assume that those marks will be eternal. We should not only consider the meaning of monuments like Silent Sam, but of towns like Chivington, Colorado, named for a U.S. Army Colonel who led the 1864 massacre of Cheyenne and Arapaho men, women, and children at Sand Creek. We should discuss not only the claims that statues of Robert E. Lee and Nathan Bedford Forrest make on public spaces, but also the power of a building named for Josiah Clark Nott, who made his fame not in politics, but in medicine, and used it to incite the arson of a school for the children of freed slaves.

It is difficult, if not impossible, to imagine a material reform that could answer these questions taking place. The likelihood that every statue, every building, every street and town named for a bigot will be renamed is close to zero. Regardless, the enormity of the problem demands bigger, more imaginative conversation about history and memory than we achieved in the renaming of Carr Building: this piece, for example, begins with a land acknowledgement that is empty if we do not discuss and act on the dispossession of these Indigenous peoples and its memorialization on the landscape. Until public concern with memorialization is unmoored from specific geographies and historical processes, until public conversation moves toward new philosophies about monuments, memorials, and naming, especially concerning their expected permanence, the project remains incomplete.

Jessica Hauger is a doctoral student in Duke University’s Department of History studying race, space, and health in modern history. Her dissertation recovers medicine’s role as a key site of contestation between Indigenous people, settlers, and the U.S. government between 1880 and 1934. It explores how the Kiowa, a tribal nation of the Great Plains, used both Indigenous and Western healing practices to sustain and reconstitute their communities through this era of settler occupation. This work comes from a broader interest in local, family, and place-based histories which tangibly illustrate the impact of the past on our everyday lives.

Forum 4.1 // Where do we study history?
Forum 4.3 // Renaming the Carr Building and its Role in the Discussion of Race-Based Issues