Forum 4.4 // Confessions of a White Moderate 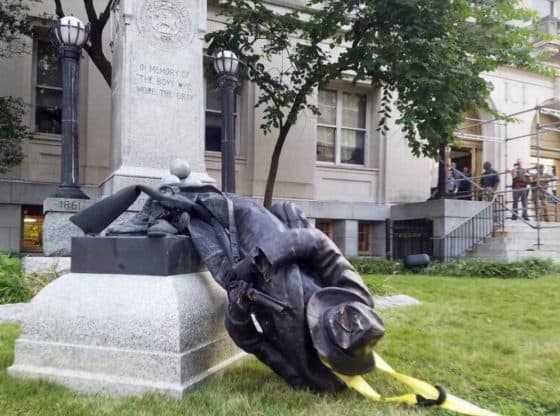 The "Confederate Soldiers Monument" after protestors brought it to the ground in Durham, NC, 2017. Photo via the News & Observer.
Forums,From Carr to Classroom |

In his 1963 “Letter from a Birmingham Jail,” Martin Luther King, Jr., explains the greatest impediment to progress. It is not, in his view, the savage racists that he was confronting on a daily basis. It was, instead, the “white moderate”: the presumptive ally who claimed to appreciate the goals of the movement, but who counseled caution and patience. These, King insisted, were false friends, blinded by their own privilege and unwillingness to confront the ways in which the established order is a monument to injustice. If any good news is to be pulled from the wreckage of the past decade, it might be that some of these white moderates are, at last, recognizing the justice of King’s complaint. At least some of them are realizing that the time has come to choose sides.

Recently, the building in which I work was stripped of its name—Carr—on account of the vile racism of its namesake, Julian Carr. I am not an expert in race or memory in the United States; others can and have discussed the historical import of this renaming more ably than I could. I was not closely involved with the efforts to rename the building—either in its earlier activist phase or its later, more bureaucratic form. I am, instead, offering up my experience as an employee in Carr Building, and one whose feelings about its name evolved over the course of my short time at Duke.

I arrived at Duke as an assistant professor of history in the waning days of the Obama presidency: one of the legion who was vaguely disappointed with the multicultural technocracy that I had hoped would bend the arc of history towards justice. Like so many others, I had inhaled enough podcasts and pundits to know that the response to the 2008 financial crisis had been catastrophic, and that American foreign policy was little better than the historical norm. I did not, though, know quite what to do about it, nor did I think much could be done. I was, in short, a white moderate in King’s sense.

In this context, and in this state of mind, it did not trouble me much to walk to work at the Carr Building on the Duke University campus. I knew very well that Julian Carr was an awful man; I even led a historical walking tour for freshmen that dwelt on his dismal career. I did not, though, make the connection, yet, that there was something untoward about having a building named after him. Why not? Certainly I felt no need to honor the man, but what I did feel was a sense that building names were an unalterable feature of the landscape. I had a sense, too, that most of the southern dignitaries whose names bestowed my town were shameful. If the entire geography were a monument to white supremacy, why single out one building? Why not learn the history, but leave the names?

Such are the shameful considerations of the white moderate that, like a lion in a lavish pen, is blind to the fact that the built environment was created for his pleasure. It took a series of jarring incidents to dislodge my complacency. The energy, to state the obvious, did not come from me or from the white moderates around me. More radical movements, often led by people of color, forced issues like this into consideration.

For me, the most eye-opening moment was a local one: the toppling of the Confederate statue on Main Street in Durham. A few years ago, I attended a benign protest against police brutality, at which a disruptive group announced their plan to bring down Durham’s Confederate monument. Like many of the white moderates around me, I was uncomfortable at the interruption, and wary of such aggressive tactics. And yet, a few days later, that statue came down. One remarkable fact about this action was that it elicited surprisingly little response from politicians or the public. There was, in fact, a silent majority of locals who wanted the statue gone, but were unwilling or unable to do anything to that end. The other remarkable fact was how simple it was to remove. The imposing statue of the soldier came down like a house of cards. It was no bronze relic of an immutable past, but a shabby construction, hastily thrown up to buttress the racial terror that reigned in the American South in 1924 (when the statue was installed). If the forces of injustice could throw it up, more noble ones could tear it down.

This was followed, not long after, by the removal of Robert E. Lee from his place of honor at Duke Chapel, following an act of vandalism. The trajectory was a similar one: activists, moving faster than the white moderate might like, defaced the statue, revealing yet another silent majority that did not care for a monument to white supremacy on Duke’s campus. And here, too, the stone façade masked a flimsy core. What was Robert E. Lee doing there? He was put up a few years later than the Confederate soldier, but his story was different. He was not chosen by Durham community members at all: he was, rather, elected by a convoluted process in which Northern architects and sculptors, doubtless with preconceived notions about what a Southern audience might want, peopled the saint’s gallery of Duke Chapel.

By the time that the Carr Building shed its name, then, the tides of historical memorialization at Duke, and in Durham, had begun to shift. This involved and required support from powerful institutions, notably the university and the city. The same was true in King’s day, as he was well aware. But as in King’s day, too, this support did not materialize until non-elite actors—in this case, students and staff—turned the issue into a problem for them. When it comes to the renaming of Carr, for instance,,it was probably an unsanctioned protest that did this work. At an alumni event in April 2018, a diverse group of undergraduates staged a disrupted action and unveiled a list of demands—including the renaming of Carr. To Duke’s credit, there seems to have been little resistance to the idea, which is not always the case (and indeed, is not the case at another major university just down the road). And to Duke’s credit, too, it has supported a number of student-led research projects into the university’s history. One group of students explored the wage laborers who built Duke Chapel; another explored the dense network of memorialization and race on campus, producing a massive report and recommending the renaming of Carr. Yet another is, in coming months, going to start exploring the sordid tale of tobacco and race at Duke, and in Durham.

It is not my place, here, to determine whether or not this is sufficient, or what it would truly mean for a mammoth institution like Duke to make reparations for its past. My more modest purpose is to explain that this sequence of events, and this constellation of actors, made it impossible for me to comfortably write “Carr” in my address; it became impossible for me to enter beneath the “Carr” sign without feeling a twinge of guilt, and of anger. Recent events made it clear, to this white moderate, that the landscape of white supremacy is one that is not very old, and that can be altered, and that has been altered. The maintenance of these spaces does not differ in kind from their erection, just as the continual feeding of the lion does not differ from the creation of its pen. It is only from the position of unspeakable privilege that the topography of racial terror appears either unimportant or unalterable.

I cannot know what it feels like to move through spaces that are designed to diminish me. The discomfort I felt at the Carr name paled in comparison to that felt by the people of color who braved its halls. This is not a story of how I learned to “feel the pain” of others and act accordingly—I did not, and cannot, and that entire model ends up privileging once again the emotional health of the ally. If this is a hopeful story at all, which it might not be, it is a story of how one white moderate, and not a particularly brave one, learned that in some times, and places, and spaces, his feelings don’t matter at all.

James Chappel is the Hunt Family Assistant Professor of History at Duke University, focusing on the intellectual and cultural history of modern Europe. He is the author of Catholic Modern: The Challenge of Totalitarianism and the Remaking of the Church (Harvard, 2018), and is currently preparing a study of old age as a moral, fiscal, and medical phenomenon. His writing has appeared in Boston Review, The Nation, and Dissent, among other places.

Forum 4.3 // Renaming the Carr Building and its Role in the Discussion of Race-Based Issues
Forum 4.5 // The Past is for the Living