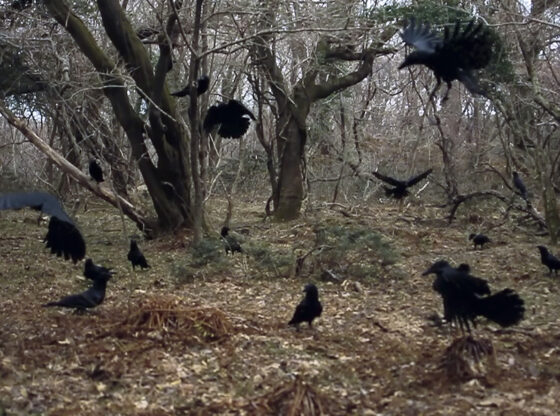 Forums,White Terror, “Red” Island: A People’s Archive of the Jeju 4.3 Uprising and Massacre |

The excerpt from “Ghosts,” the first video in Jane Jin Kaisen’s 8-channel video installation Reiterations of Dissent (2011/16), begins with the image of the magnificent crater of Hallasan. It then transitions into a scene with a flock of crows gathering to feast in the aftermath of a kut (shamanic ritual) in commemoration of resistance fighters who were killed in the mid-mountain forest during the Jeju April Third Massacre. The visceral imagery is juxtaposed with the voice of writer Hyun Ki-Young, who recalls a childhood memory of the long silenced Sasam.

Reiterations of Dissent illuminates the suppressed history and fragmented memories of the Jeju Third Uprising and Massacre, which began in 1948 on Jeju Island, unfolding shortly before the Korean War’s outbreak. In a brutal crackdown of a local uprising, state authorities and rightist paramilitary groups, under the auspices of the United States Military Government in Korea, waged a “red hunt” that unleashed genocidal violence on large parts of the island’s civilian population. This ideologically charged event was systematically silenced for five decades, and its memory remains contested to the present day. Reiterations of Dissent explores an experimental language for documentary filmmaking and challenges relationships between text, image, and narrative. Composed of multiple distinct video narratives and narrated mainly through the voices of the children of victims and survivors who have been central to truth and reconciliation efforts, the film uncovers various underlying political motivations and portrays how the unreconciled trauma of Jeju 4.3 continues to resonate through multiple forms: the island’s present landscape, evocative literary representations, recurring memories of survivors and relatives, shamanic rituals that mediate between the living and the dead, and in protests against the construction of the Jeju naval base.

Jane Jin KAISEN (born 1980 in Jeju Island, South Korea) is a visual artist living in Copenhagen. She is Professor at the School of Media Arts at the Royal Danish Academy of Fine Arts. She holds a PhD in artistic research from the University of Copenhagen, an MFA in Interdisciplinary Studio Art from the University of California Los Angeles, and an MA in Art Theory and Media Art from the Royal Danish Academy of Fine Arts. Most recently, she represented Korea at the 58th Venice Biennale with the film installation Community of Parting (2019) alongside artists Hwayeon Nam and siren eun young jeong in the exhibition History Has Failed Us, but No Matter curated by Hyunjin Kim. Incorporating video installation, experimental film, photographic installation, performance, and text, Kaisen’s artistic practice is informed by extensive interdisciplinary research and engagement with diverse communities. She is known for her visually striking, multilayered, performative, poetic, and multi-voiced feminist works through which past and present are brought into relation. Engaging topics such as memory, migration, borders, and translation, she activates the field where subjective experience and embodied knowledge intersect with larger political histories.