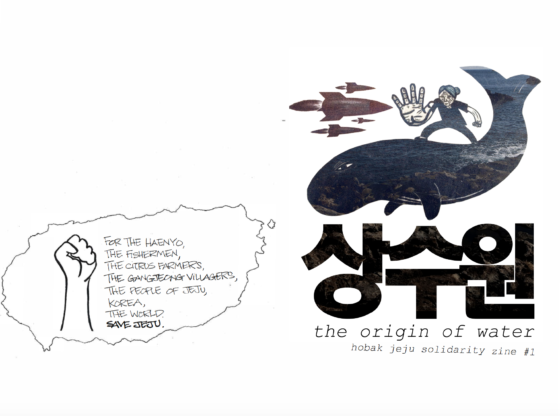 Featured,Forums,White Terror, “Red” Island: A People’s Archive of the Jeju 4.3 Uprising and Massacre |

Sangsuwon, a project of HOBAK (Hella Organized Bay Area Koreans), was a collaborative 2013 effort to show solidarity and build consciousness around the construction of a naval base on the embattled island of Jeju in South Korea. Though Jeju is an idyllic place, full of life, lush greenery, and wild beauty, its quiet surface belies the intense struggles that its people have endured through conquest, militarism, and a genocidal massacre under the guise of anticommunism. The people of Jeju themselves have pointed out the ways in which history threatens to repeat itself with the installation of a new naval base filled with American battleships and nuclear submarines: because of its strategic location in Asia and the Pacific, it has become a site of increased militarism and hostility towards China. As Koreans in the U.S. diaspora, HOBAK wanted to contribute this humble zine towards the struggle as we built connections with the villagers and activists on the forefront of resisting this base.

Forum 5.7 // Over 5,000 Days of Resistance: An Interview with Anti-base Activist Choi Sung-hee on the Gangjeong and Jeju Struggle for Peace