Forum 6.1 // Abolitionist Study and Struggle in and beyond the University 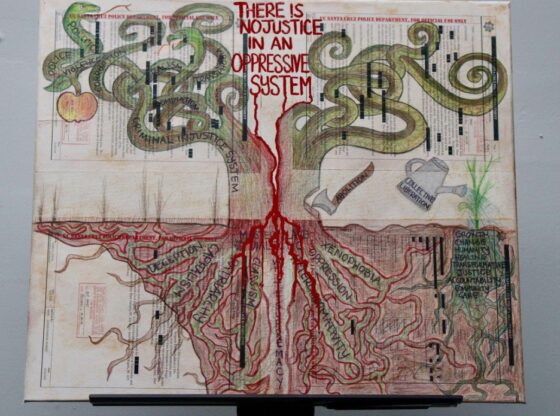 Cover image: There is No Justice in an Oppressive System by MJ Hart

The summer 2020 rebellion, sparked by the murders of George Floyd, Breonna Taylor, and many other Black people at the hands of police, ignited the nascent movement to abolish campus police. Born out of the rebellion and the policing of graduate worker organizing at the University of California the year before, the Cops Off Campus Coalition was formed by students and workers in colleges and universities across Turtle Island to build solidarity across campuses as they struggled for the defunding and abolition of campus police departments. However, the transformative vision of the Cops Off Campus Coalition and abolitionist organizers on campuses across the country went far beyond the abolition of campus police. Organizers took on the many entanglements between universities and institutions of organized violence, including university endowments that were invested in Israeli companies, the recruitment of students into the military and policing agencies, and partnerships between campus police departments and municipal police forces. Demonstrating that “abolition is presence,” as Ruth Wilson Gilmore teaches us, organizers created transformative justice responses to sexual violence, built mutual aid projects that met the needs of students, staff, and community members in response to austerity regimes that escalated during the pandemic, and fought for the creation and expansion of Black studies departments. This work built on decades long histories of abolitionist organizing in the university, from the transformative vision of the Third World Liberation Front at San Francisco State in 1968 to the feminist anti-imperialism of the Student Liberation Action Movement! at the City University of New York in the 1990s.

Abolitionist University Studies emerged in dialogue with these struggles as a body of activist research driven by the questions organizers needed to answer in order to more effectively do their work. This militant scholarship in the tradition of Gramsci, Hall, and Gilmore attempts to “understand how the bloody system works” in order to change the ideological and material field of struggle. Abigail Boggs, Eli Meyerhoff, Nick Mitchell, and Zach Schwartz-Weinstein’s collectively authored piece, Abolitionist University Studies: An Invitation, offers a counter-history of the university that foregrounds processes of accumulation and offers a starting point for thinking about the university differently. The Cops Off Campus Research Project exemplifies this radical methodology, studying university budgets, administrative records, and real estate transactions in order to equip organizers with the knowledge and tools to strengthen their abolitionist campaigns. The Underground Scholars Initiative at the University of California is an organization led by formerly incarcerated students who have created structures of support and study within the university. One of the most exciting projects in AUS is the On The Tier podcast produced by Berkeley Underground Scholars, which features brilliant oral histories with organizers in the initiative, as well as analysis that moves between prisons and universities in critical ways. Yalile Suriel’s microsyllabus on campus policing is a thoughtfully curated collection of sources that allows for a deeper study of the history of campus police. Work in this forum contributes to this radical body of scholarship, interrogating the university as a carceral institution entangled with systems of organized violence, highlighting the long history of abolitionist struggle and institution building in the university, and raising questions that will push scholars and activists to sharpen their analyses and engage in abolitionist experimentation.

In this forum, historians of campus policing, scholars in Abolitionist University Studies, artists, and organizers come together to share work on histories of campus policing and abolitionist organizing. This work shares an understanding of the university as a site of struggle, one defined by carceral histories and abolitionist possibilities. The pieces in the forum contribute to our understanding of the university, allowing us to sharpen our analyses and more clearly see the landscape where we work, study, and struggle. This forum is rooted in this collective militant study and organizing. By examining universities historically, and historicizing the present day university, the pieces in this forum ground the struggle for building abolitionist futures. Universities, like every part of the welfare state, have become deeply enmeshed with systems of organized violence, and many university employees now do the work of policing, including those without a gun and badge. The stakes of abolitionist organizing in the university are significant, as we struggle for life-affirming institutions from places subjected to the twinned processes of organized violence and organized abandonment. The pieces in the forum vary significantly, from more theoretical analyses of institutionality and power to campus specific histories of policing and organizing. Read together, they show the complexity of universities, and thus the need and challenge of organizing within, across, and beyond these institutions.

The forum consists of essays, artwork, and an interview with abolitionist organizers. Historians Grace Watkins and Yalile Suriel examine the changing relationship between university administrators and campus police as they navigate student protest in “Who Polices the Campus?” In “No Cops, No Guns, No Code,” American studies scholar Kathleen Brown looks at the founding of the campus police force at the University of Michigan in 1990 and the organizing against its establishment in the prior decade. Drawing on work in critical theory and political economy, David Maldonado incisively analyzes the ways that the University of California at Berkeley has used policing and real estate to reshape his hometown and wage class war on its residents. In “Abolition, Universities, and the American Right,” Liz Montegary looks at right wing attacks on ethnic and gender studies programs and the university as a whole as a way of thinking through the possibilities for a left abolitionist analysis in the university. Reflecting on the policing of student protest at Wits University in Johannesburg, anthropologist Kelly Gillespie and education scholar Leigh-Ann Naidoo show how the logic of university autonomy and self-governance undergirded a project of securitization. In “Scaling Up and Building Solidarity,” organizers with the Cops Off Campus Coalition discuss abolitionist organizing today in local campus and community contexts as well as scaled up across Turtle Island, and historicize this work within longer legacies of student protest. MJ Hart, an artist, abolitionist, scholar, activist, and organizer with the Underground Scholars Initiative, concludes the forum with a number of pieces of visual art grounded in themes of abolition and the carceral state, which they reflect upon in a short essay.

This forum is both a call to study and a call to action. The two are inseparable as we struggle within and beyond universities to pierce the future for hope. Our study must be attentive to the questions born out of struggle, and our organizing needs to be rooted in an analysis of the present conjuncture. I hope that this forum can inform and inspire collective study and struggle.

Lucien Baskin is a student in the Urban Education program at the CUNY Graduate Center and an instructor at John Jay College, and they organize with Free CUNY and the Cops Off Campus Coalition. Lucien writes about histories of abolitionist organizing at CUNY and is the co-author of a forthcoming chapter on campus police unions with Grace Watkins and Erica Meiners.

Forum 6.2 // Who Polices the Campus? The Relationship between Administrators and Campus Police
Monkeypox Microsyllabus