Forum 6.2 // Who Polices the Campus? The Relationship between Administrators and Campus Police 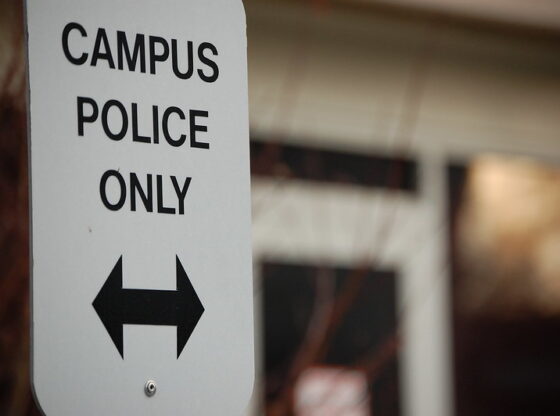 By Yalile Suriel and Grace Watkins

Student discipline is one of the most hotly discussed issues within higher education in the United States. Questions of who is punished by whom and for what offenses are fraught. Despite occasional directives or guidance by federal legislation, the administration of student discipline varies widely in practice across different institutions. The structure of the current system can be traced back to the tumultuous period of the 1960s and early 1970s, when the same debates surrounding student discipline contributed to the evolution of university administrative duties and the creation of full-service campus police departments.

During the Student Protest and Black Campus Movements, university administrators felt that these changing circumstances required new tactics to subdue and suppress escalating demonstrations. Their efforts were further complicated by a series of landmark legal cases that redefined their legal authority over students. In particular, Dixon v. Alabama in 1961 marked the beginning of the end of in loco parentis, which was the bedrock of the previous disciplinary paradigm. Administrators were no longer able to act “in the place of the parent” by expelling students at will. Increasingly, they turned to law enforcement figures within and outside of their institutions as a way to maintain control of campus.

At the start of the Student Protest Movement, university presidents and other executive administrative figures placed pressure upon Deans of Students and Student Affairs Office employees to serve as the first line of enforcement. As students called for a fundamental transformation of the university, administrators across the country instead sought to apply the tactics and techniques of prison guards to the context of higher education. As Robert Shaffer, the Dean of Students at Indiana University, later recalled:

I remember at our national conference, the head of the federal prison of California addressed us at a meeting. He said before you deal with anyone you reestablish your authority. That was the early response to demonstrations. You do not give in. The word among the deans was: don’t give in under duress. It was just ridiculous because often the students were absolutely right in their protest against rules and the unenforceability of the rules we had. We had just absurd rules…maybe it’s because so many of our superiors, presidents, public relations people, trustees, thought the dean’s job was to hold the line on behavior.[1]

As Shaffer’s remarks suggest, many administrators began to resent their disciplinary duties, even as they looked to prison officials for a blueprint on how to suppress uprisings. For example, Harris Shelton, the Assistant Dean of Men at Florida State University in the late 1960s, felt that he was being asked by his superiors to serve as an amateur policeman. He was “called upon to do things such as patrol the Black cultural center at night looking for students who were defying the administration.”[2] Administrators were concerned that these punitive duties were affecting their reputation among the student body. As E.G Williamson, the Dean of Students at the University of Minnesota in the 1960s explained, it was a “shock to be portrayed by the student newspaper as essentially concentrating our efforts on depriving students of their civil liberties and due process and imposing unreasonable restraints on individual freedom.”[3]

Administrators like Williamson wanted to distance themselves from their reputation as “an agency for the repression of freedom and action” and “prove that [they] are more than policemen and disciplinarians.”[4] They felt that their disciplinary actions constantly overshadowed the work they did in counseling, orientation, scholarships, and student advising. Accordingly, administrators began to strategize ways to rehabilitate their image. One common route was to engage in public relations campaigns to increase the visibility of their student services. Williamson recounted giving “continuous presentations to student groups about their services and a personal touch in the form of inviting critics to luncheons and meeting with directors to ‘ask questions and hear our story.’”[5]

In addition to hosting these PR events, administrators also outsourced many of their enforcement responsibilities to other university employees. They often found campus security departments to be an eager and willing recipient of these duties. Prior to the 1960s, campus security officers had little to no official police powers and were typically housed under Buildings and Groundskeeping departments. The large majority of these officers aspired to expand and professionalize their departments in order to gain the legitimacy and powers of “real” police. These aspirations aligned with the interests of Student Affairs administrators, as well as those of many university presidents and trustees, who sought to crack down on student protests and avoid calling in outside law enforcement onto campus (and thereby risk large-scale conflict, negative media attention, and relinquishing their primary decision-making power over the situation).

Administrators supplied campus police with more funding, manpower, equipment, and arms in order to crack down on student protests. In the process, campus departments rose up the university administrative hierarchy and also gained legal recognition through state legislatures and deputization agreements with local authorities. Armed campus officers outfitted in riot gear soon replaced Deans of Students and other administrators on the front lines of demonstrations. They used clubs, tear gas, and subversive tactics to break up protests, as well as their newfound powers of arrest to detain and punish student leaders. In doing so, campus police became central actors in the backlash to the Student Protest Movement.

Questions soon emerged regarding the role campus police should play in student discipline outside of the specific context of demonstrations. Many administrators were in favor of a system in which they maintained maximum control and discretion over how student cases were handled. As scholar John Sloan notes, this philosophy produced a two-tiered system in which non-students were arrested by campus police for the same offenses that were handled internally when students were involved, especially if they were white. There was a particular emphasis on incidents that would generate negative media attention for the school or hamper the prospect of their athletics programs. Administrators regularly conferred with campus police to decide whether student cases should be brought to the local district attorney. As the former president of Stanford University, Kenneth Pitzer, explained to the Senate Committee on Government Operations in 1969, “There are categories of things which are technically violations of the law but which I believe better dealt with by the internal authorities within a private organization.” Student activists, faculty, and members of the public have raised concerns about the creation of a “double standard” for offenses ranging from underage alcohol consumption and hazing to sexual violence.

There are a variety of reasons that might have motivated campus police officers to participate in these arrangements. They were beholden to the demands of the university administrators who funded their departments. In order to maintain a collegial relationship and continue to expand their funding and institutional support, there was significant incentive to heed the requests of administrators. Individual officers may also have felt inclined to extend leniency in cases where they felt sympathetic to the students involved or hoped that being seen as more lax than city police would curry favor with the student body.

Some campus police officers, however, bristled at what they perceived to be the “buck-passing” of administrators and resisted the “two-tier” system. One campus chief, George Carlson, advanced this view in a speech he gave to municipal and state police officers in Galveston, Texas in August 1969. Carlson was a former FBI agent and worked with COINTELPRO before becoming the Director of Police for the University of Texas (UT) system.[6] In the notes for his speech, Carlson complained of the “weaknesses among our college and university administrators.”[7] Echoing the words of administrators themselves, he described how, “many deans want the police to take action against students even for violation of some rule. The deans claim if they ‘the dean’ take action, they will alienate the students and the students will not come to them for counsel.” Carlson felt that, “this type of dean is weak-kneed and adds very little toward solution [sic] of any problem.” He felt that, “the sooner the administrators of our universities and colleges take a ‘hard nosed’ approach in handling the student the better.”[8]

In Carlson’s view, enforcing student conduct code threatened campus forces’ new and fragile status as “real” police. Campus police chiefs who agreed with Carlson balked at being seen as pseudo-administrators and instead preferred to promote an image of “impartial enforcers of the law.” The seemingly contradictory actions of campus departments at different institutions is reflective of the competing interests they faced in the process of becoming formalized police agencies. Whether campus chiefs aggressively pushed an agenda of arresting students and non-students alike or promoted a two-tiered system in agreement with university administrators was highly context dependent. The type of school, the region and attitudes of state actors, and personalities of the administrators and officers involved all bore heavily on the shaping of campus police priorities at individual schools.

The study of how campus officers and administrators navigated these debates is central to our understanding of how student discipline and policing have evolved since the Student Protest Movement. In negotiating the role of campus police, these actors participated in broader debates regarding criminal responsibility, student status, and the rights and unique privileges of the university system. These conflicts concerned what the true purpose and responsibilities of campus police “should” be as they continued to gain more of the same powers afforded to their municipal counterparts: were campus police intended to function as independent, full-service police departments or were they intended to protect and serve the interests of the university administration and students? The answer to this question remains contested.

What is indisputable, however, is that these debates have permanently altered the course of higher education in the United States. Today, there are over 900 colleges and universities in the United States with campus police forces. Campus chiefs often report to the most senior university administrators and command full-service departments, sometimes even with statewide jurisdiction. These police forces continue to shape university life in important ways, including the realm of student discipline.

Yalile Suriel is an Assistant Professor of universities and power at the University of Minnesota. She is working on a manuscript titled Campus Eyes: University Surveillance and the Policing of Black and Latinx Student Activism in the Age of Mass Incarceration, 1960-1990. Along with co-editors Grace Watkins, Jude Dizon, and John Sloan, Suriel is working on an upcoming edited volume titled Cops on Campus: Critical Perspectives on Policing in Higher Education. She is a former Turner Fellow and a former AERA Fellow.

Grace Watkins is a doctoral student in History at the University of Oxford studying campus policing in the United States. She has written about campus police in the Chronicle of Higher Education, the Washington Post, and the Comparative American Studies journal. Along with co-editors Yalile Suriel, Jude Dizon, and John Sloan, Watkins is working on an upcoming edited volume titled Cops on Campus: Critical Perspectives on Policing in Higher Education.

Forum 6.3 // No Guns, No Cops, No Code: the 1980s Anti-Deputization Movement at the University of Michigan         
Forum 6.1 // Abolitionist Study and Struggle in and beyond the University