Forum 6.4 // The Local as Problem: A Berkeley Story 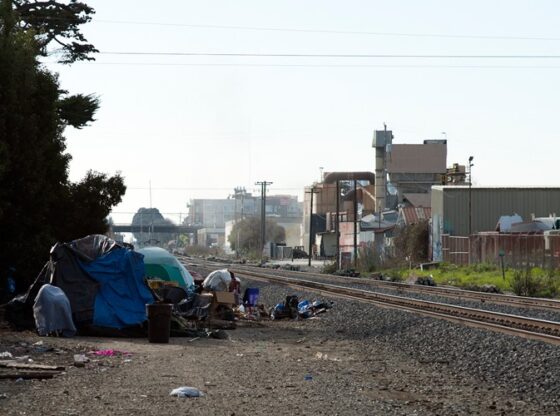 Cover image: photo of a shelter for houseless people in Berkeley, CA taken by the author

The story I tell is both personal and political. For those that know me, this will come as no surprise. I write about the University of California, Berkeley (UCB Hereafter), in particular, and about “The University” and its logics more broadly. My BA., MA, and eventual PhD will all be stamped and credentialized by UCB. I am also from West Berkeley or an area formerly known as that. You see, many parts of the city are almost unrecognizable to those of us from here. The state and the protectors of capital enacted swift and precise projects of dispossession, removal, and gentrification using carceral logics and practices. The University is deeply implicated in those carceral logics, especially through its attachments to the political economy, through policing, through its role as employer, and its attending labor policies and practices.

In poststructural fashion I start with an ending of sorts. Poststructuralism reminds us that things are never static and when we move beyond structuralism, we understand that structuralism made things static because things entered our consciousness based on their relationship to each other in a structure and not in and of themselves. But then, what is the beyond of that? What breaks the binaries that Derrida, for example, found so limiting? To pause my cursory nerding out, I return to motion and ask you to come with me.

Thinking through this, I have gotten in the habit of reading the first few lines of Jack Halberstam’s Introduction to The Undercommons By Harney and Moten. Fred and Stefano would caution against treating critique as an end in itself but damn if this book didn’t rearrange almost all my thinking and shift my politics, my reading, and most importantly, Study. I didn’t say “my Study” because Study is collective and speculative for them, for us. Ok, let’s roll with Jack and Fred and Stefano and get to these lines that so incisively ask us to practice and imagine abolition.

Jack starts the entire text with my favorite abolitionist provocation ever, stating simply that “It ends with love, exchange, fellowship.” IT ENDS BRUH! Starting the entire text with ‘it” would probably draw serious ire and bad grades from writing instructors and grammarians alike. But this is perhaps one of the most brilliant invitations to engage in collective Study ever written. We all probably have an idea of what the “it’ Jack refers to is. He has an idea of what the ‘it’ that “ends” is. You have an idea what “it” is, I have an idea too. However, only through what Manolo Callahan calls “different habits of assembly” can we collectively decide on praxis that would end “it” that abolition would demand from us. Yeah, it fucking ends! And we gon’ have to come together differently to imagine and practice the world making project of abolition that is the beyond the beyond, the negation of the negation, as Marx and Ruth Wilson Gilmore might gesture.

Moving on then, “it ends with love.” Following Saidaiya Hartman, we might also wonder “is abolition a synonym for love?” Hartman’s incisive prose asks us to consider that even in conditions of deep repression, love presents a temporary refuge. How might we hold on to the unfinished freedom dreams, as Kelley would gesture, that emanate all the way from Reconstruction to the contemporary prison. George Jackson understood this better than perhaps anyone. He and his Comrades practiced a form of refuge that posed a particular insurgent threat rooted in solidarity. The state sponsored theft of his life should remind us that organizing, especially in spaces deemed unworthy of love, poses a threat to the terms of order. It opens a paradox when we find each other and express love/solidarity/refusal in spaces meant to break us. It shows the promise of the temporal refuge (love) as permanent feature. The carceral counterinsurgent state created long term solitary confinement and supermax prisons in the wake as response. Their response consolidated around the production of an undeserving “dangerous” Other to convince people to fear the refuge, the organizer, and thus abolition and love.

Lastly, I read Halberstam’s use of the term “fellowship” along anarchist lines. Quickly, we might question our dependance on what Cedric Robinson named as our attachments to leadership. That is, leadership as necessary construct, a construct consolidated through a hierarchy based on the “rare excellence” of the leader’s “natural superiority.” Marx in his brief passages on communism in volume 3 talks about the realm of necessity and the realm of freedom. We will have to contribute with shared labor and shared needs as necessity, but the rest is a shared freedom. When we share needs and share burdens, we highlight the distinction between labor and labor power. That is Capital, according to Moten’s reading of Marx, wants to abstract value from the body of the laborer (labor power) but does not want to be responsible for how we reproduce ourselves. If we know are responsible then, why do we believe in the superiority of those that would protect the process of abstraction? What if labor isn’t the value form? Can we collectively decide what value should be?

Okay, so from the theory to the story I want to tell which is really an ending, a beginning, and a constant motion toward a general antagonism or the moment of general strike. You see, I grew up in Berkeley in the 1970s and early 1980s in the shadow of a climate in which many believed that revolution was possible, that claimed that the power of the people was stronger than the machine, and that sometimes all we needed was love.

I start with explaining the University in its role as developer to remind us that they are the machine. Their latest development plans include the tearing down of People’s Park and the simultaneous tearing down of the last rent-controlled building they own so they can build more dormitories. I don’t mention People’s Park because I study it, I don’t. It doesn’t represent “free speech” for me. It has long drawn the ire of local residents because of the precarity that neoliberalism and deinstitutionalization left in its carceral footprint. There is rampant crack cocaine and heroin use there and this points to the morbid symptoms of a failed state. But it is also that way because the Carceral U destroyed an ecosystem of hippies that managed a collective existence there at one time. I start there because I watched as the university, its police force, and local and federal police departments waged a class war on the hippies. They used obscure federal laws from the 1960s to criminalize and arrest people that were for the most part selling fifty cent or dollar street drugs. A contingent of those that followed the Grateful Dead and called Berkeley their temporary home ended up in Lompoc and Terminal Island. The machine systematically removed them in service of capital accumulation, gentrification, and storefronts with airbrushed revolutionary garb and fucking tied dyed shirts for 25 dollars. The goods and services that the hippies once sold to eke out a modest and peaceful existence were now for sale at American fucking Apparel and the Gap.

Again, as should be clear, our motion doesn’t stop there. No, this is also when Berkeley police formed its drug task force and systematically ripped through South and West Berkeley (my neighborhood). This of course, is not to suggest that the “war on drugs was the engine to mass incarceration” as Alexander and Duvernay continue to misrepresent in their partial analysis. The fuller explanation understands that during an organic crisis of capital (a crisis of realization) and an immense labor surplus, speculative capital reorganized itself and aligned with the state to fill a surplus in state capacity. Through bipartisan support, the state rallied around a racialized folk devil to convince the public to fill the final surplus, land, and combine the surpluses in the form of prisons. Speculative capital also reformed itself in the shape of housing markets that quickly shifted from use value to exchange value. This matters because in its role as developer the University attracts wealthy, especially out of state and international students, which exacerbates the crisis and displaces my people. Further, as employer, the university, like all neoliberal institutions, began union busting and outsourcing its labor force, largely local Black and Brown and working-class white people. Lately, we have seen labor strikes by almost all working sectors in the university but especially service workers. This is when University police come out and discipline people, none more so than when they scraped protestor David Cole’s face across the concrete. The result is a gentrification to prison pipeline and the evisceration of my hood, as we have written about before. The message is clear; move out the way for the ideal student and their attachments to capital, proximity to whiteness, heteropatriarchy, and toxic entitlement. In fact, let’s just say in another life, prior to my more than a decade in recovery, I, ahem, saw a lot of drug doing and dealing at the fraternities. I saw frat boys fight each other often, I saw them have rivalries. I want to be clear here, kids do dumb shit all the time. Further, as an abolitionist I do not want to level down, as John Pfaff might warn us, and start criminalizing and targeting fraternity members and lining them up for prison. But damn if that’s not what they fucking did to us. We got set up with sentence enhancements, gang enhancements, and time in cages for things that the capital class did and does all the time.

There is a spatial politics to this too. During my teenage years we used to break dance along Telegraph Avenue amongst big crowds of tourists. On any given weekend you would find tons of working-class kids of color competing against each other at some of the highest levels, kids doing world class graffiti, and beat boxing and rapping. Berkeley was a cultural Mecca of sorts, though that is a much longer story. However, not long after this era, we still congregated on Telegraph Avenue on the weekends. On Friday and Saturday nights you could find hundreds of local people from all the surrounding working-class neighborhoods. Everybody was there, North Richmond, East and West Oakland, South and West Berkeley, etc. etc. The police and the university responded by implementing loitering laws and anti-cruising statutes. The message again was clear, “this is not your space, it belongs to the wealthy parents who send their kids here to become replacement parts in racial capitalism” to borrow language from my comrade Steven “Sparky” Czifra.

Again, the antagonism continues, it does not end or resolve its internal contradictions. The university promises education and enlightenment. We see the distinction between political education and what they call education. This why Harney and Moten talk of refuge and not enlightenment. The university cannot provide the critical consciousness that will ‘save’ our communities. It cannot share needs and burdens with us. We can call for a general strike and see ourselves as labor power. We can call out its contradictions and name its roles clearly. We can also find ourselves with other subversives in the undercommons. The motion continues, it begins again, until it ends with love, exchange, fellowship.

David Maldonado is a PhD candidate in the Graduate School of Education at UC Berkeley. He is a founding member of the Underground Scholars, a formerly incarcerated and systems impacted student group at the UCs. David was born and raised in Berkeley, California and is active in formerly incarcerated theory and praxis as well as a