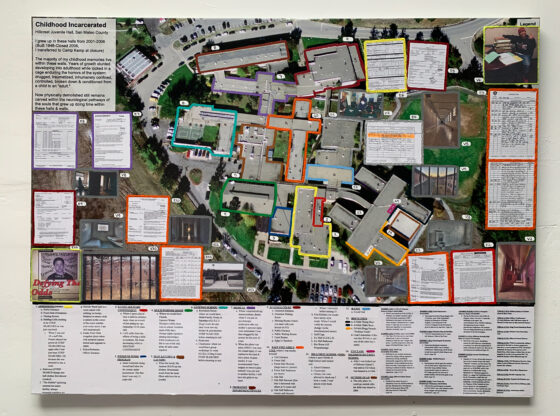 My life is a constant struggle for my humanity, healing, and liberation from the subjugation of the criminal injustice system. I entered the juvenile justice system at 11 years old and spent my entire adolescence into adulthood growing up incarcerated. I graduated to the adult criminal injustice system and had no sense of “freedom” until I was 25 years old. Upon release from the physical subjugation of the system – I began to rebuild my life finding liberation through education. At the University of California, Santa Cruz I began working to expand access to education for other formerly incarcerated students as the Community Outreach Coordinator and Co-Founder of the Underground Scholars at UCSC. Creating art helped me understand and transcend the trauma I endured before and during incarceration.

Art provides me an avenue through which I can delve into the psychological effects of my experiences. Works including Childhood Incarcerated (2022), and Solitary Confinement (2021), as well as a public mural currently on view at UC Santa Cruz, Dismantle the Criminal Injustice System (2020), are a reflection of my lifelong healing journey. These and other works are a crucial part of my social justice work, allowing me to advocate publicly for the abolition of oppressive systems. My work draws on personal experiences;, as I transform my criminal records and institutional documentation into works of collage, murals, and installation. The goal is to help the public engage critically with issues around our courts, prisons, policing and ideologies rooted in punishment.

My most recent trauma inflicted by the criminal injustice system took place during the uprisings of 2020 when I was arrested while protesting. A few weeks later I was targeted in a hate crime attack while attending UCSC. University police lied to protect the attacker, falsified official documents blaming me for the hate crime attack. The DA refused to file charges because of the falsified police report and hate crime checklist. Ironically, at the same time, the Santa Cruz County DA pursued criminal charges against me for protesting. My healing process of turning this trauma into power is reflected in the piece titled “There is No Justice in an Oppressive System” (2021), created atop the falsified police report.

My experiences being criminalized at my university were painful and awakening. I grew up labeled a “violent felon” and “superpredator.” Even now as a student on a prestigious scholarship at a top university, my existence as a transgender, formerly incarcerated person of color was the justification for the injustice done by university police and the administration. While others at UC Santa Cruz talk about the school-to-prison pipeline, I continuously directly experience exactly how this pipeline works. I worked with artist Ashley Hunt and other Underground Scholars to create a social practice artwork exploring this dialectic in the Visualizing Abolition Series titled “Abolish the University” (2021).

As a self-taught artist my artwork really evolves through my lived experience exploring the intersections of gender identity, incarceration, race, trauma, healing, reclaiming my ancestral culture, and the development of a critical consciousness to name a few. Creating art for a larger social justice movement is crucial in manifesting change because art allows both the viewer and creator the opportunity to transcend the bounds and constraints of social norms we consciously or unconsciously abide as we learn to navigate societal spaces. I believe art creates a bridge to the imaginative and to the materializing of our manifestations. To me, art is a catalyst transmuting trauma into power while empowering others to take action. The expression becomes an inspiration to others to have empathy and understanding while promoting a sense of personal responsibility in recreating a society with ideologies that are rooted in humanity, acceptance, accountability, collectivity and care. The road to decriminalization – and to a society that approaches harm from a lens of rehabilitation and transformative justice, is rooted in a collective response. Only together will we truly reimagine and recreate societal norms that no longer allow mass incarceration to take precedent.

I believe it is all our responsibility to actively move away from relying on systems, policies and procedures that are rooted in punishment. We must prioritize raising collective consciousness around these issues so that our perception of our societal problems will shift to be seen through a lens of abolition. Not just in the way we address harm but in the way we care for one another by treating each other with humanity, empathy and respect. Only then will we truly begin to dismantle systems of oppression, achieve collective liberation and create a society that strives to heal the trauma of transgressions, not just shift the blame.

a selection of artworks by MJ Hart

Born & bred in the Bay Area MJ Hart (they/them) is an artist, abolitionist, community organizer & gang member turned activist after surviving the horrors of growing up in the criminal injustice system. MJ is a Co-Founder of the Underground Scholars Program at UC Santa Cruz, a Founding Board Member of the organization Pride In Truth, a Reentry Navigator with the California Justice Leaders & a Youth Organizer with Coleman Advocates in SF. MJ also supports the Restorative Practices Program at the Ryse Center in Richmond, CA. MJ is a first generation college graduate earning their BA in Psychology with a minor in History of Consciousness from UC Santa Cruz. Through the development of a critical consciousness MJ strives to put the weaponization of their mind into action, sharing their wisdom from lived experience, political education, strategy & more while organizing with grassroots movements in their communities & beyond. MJ continues to push a hard line for justice, humanity, & transformational healing while watering revolutionary seeds of resistance.

Tribute to the scholarship of Amy Kaplan
Forum 6.7 // Scaling Up and Building Solidarity: A Conversation with Organizers from the Cops Off Campus Coalition