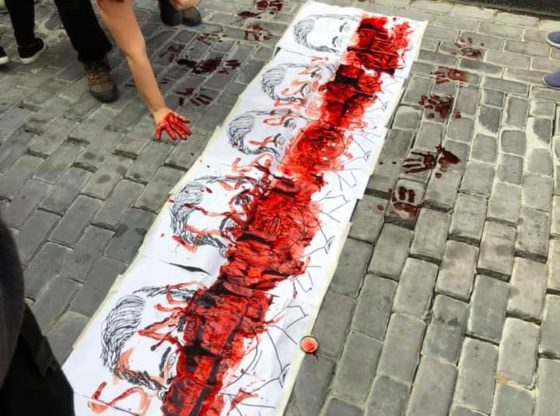 Performance held outside of the governor's mansion on July 15, 2019 aimed at holding Ricardo Rosselló accountable for the deaths of Puerto Ricans. Photo by Yarimar Bonilla.
The Abusable Past |

#MeCagoEnLaIsla is an often-used hashtag by the “communications expert” Rafael Cerame D’Acosta in the Telegram chat involving Puerto Rico’s governor Ricardo (Ricky) Roselló and his closest “brothers.” As El Nuevo Día reports, Cerame D’Acosta is president of RCD International Advisory, a company that has reaped $783,400 in 21 contracts with Rosselló’s government, of which $315,000 have been directly the result of contracts granted by the Governor’s Office. But these, however appalling, are merely breadcrumbs. The massive scandal known as #RickyLeaks and #TelegramGate currently besieging Roselló and his closest friends and collaborators has been recently revealed to involve, for instance, at least 50 million dollars for one of the chat’s members, as reported by the Centro de Periodismo Investigativo on July 17, 2019. The majority of these men do not even hold positions in any public office, but are rather lobbyists or “influencers” that have taken to the most extreme the neoliberal phenomenon of privatization and corporatization of supposedly “democratic” governments.

Literally meaning “I take a shit on the island,” “me cago en la isla” idiomatically denotes, rather, something more akin to “fuck the island.” It is used whenever the boys’ club of, primarily, entitled, moneyed, white men in the chat find an act, a behavior, an expression or a person beneath their standards. Perhaps understandably, #MeCagoEnLaIsla, however, has not received the degree of attention that the rest of the chat’s vicious, misogynistic, homophobic, racist, ableist attacks has garnered. Nor has it been linked to the chat’s most unspeakable moral crime: the jokes about our thousands of dead bodies as a result of the local and federal governments’ utter negligence and abandonment during and after hurricane María. Yet, I believe that, on a deeper sense, the hashtag is intimately connected to the aforementioned forms of hatred, insofar as it reenacts a longstanding ideology of loathing toward our insular geography. Originally deployed by the very empires that, ironically, were built on the blood and resources of the Caribbean archipelagos they revile, the insularist ideology has been consistently reproduced by the local elites of complicit, neocolonial criminals.

What initially appears as a class-, race-, gender-, sexual orientation-, ableism-based only hatred, is in fact much deeper, reaching the most elemental level: the geology of our corner in the planet. Whatever disgrace, injustice, oppression, lack or crime happening on the islands of Puerto Rico –including its “99%” peoples– is somehow always interpreted as an inescapable result of geology’s accidents. I have devoted over ten years of research and writing to discrediting this notion, and I am currently engaged in a research project to demonstrate the ways in which it undercuts Puerto Rico’s political imagination and will, as well as, to my mind, our urgent, vital, inescapable relations with the greater Caribbean region in the process of overcoming the current crisis.

On March 2019, I visited Aruba to attend the Island States/Island Territories Conference, where the organizers asked me to offer a brief report on Puerto Rico post-hurricane season 2017. On that occasion, trembling with sorrow, I contested another presenter’s emphasis on the need to market the Caribbean islands as “open for business” saying that Puerto Rico was, instead, “open for justice.” Being “open for business,” at the cost of a colossal lie of “development” and “progress” throughout the 20th century, has led us head-on to the present humanitarian and fiscal crisis. I proceeded to read the following, necessarily brief, report:

Like many countries in the Global South, Puerto Rico is shouldering the burden of the undemocratic policies of neoliberal capitalism. As an ideology of privatization, government deregulation, and endlessly increasing debt for “development,” neoliberalism is, at once, the motor and proposed savior of the current humanitarian and fiscal crisis in Puerto Rico. By implementing so-called austerity measures, neoliberalism claims to save us from fiscal collapse, while, in fact, deepening the ecological tragedy and broadening the abyss between the minority who control most of the global wealth, and an increasingly precarious majority, whose bodies are ever more indebted, insecure, and denied access to basic resources.

Puerto Rico’s status as a colony (“territory”) of the United States since 1898, moreover, has enabled an unprecedented acceleration of this regressive dynamic. The crassest expression of Puerto Rico’s colonial subjugation in the present moment is undoubtedly the PROMESA law, with its Fiscal Oversight and Management Board (FOMB) becoming the de facto government of the country and determining the paths to “recovery” from the crisis, while in effect intensifying it. This contradiction is amply demonstrated by the decisions taken and measures imposed by the FOMB since it was constituted in 2016 by then-President of the United States, Barack Obama. For instance, the FOMB has: (1) spearheaded an assault on the University of Puerto Rico, which is experiencing a reduction of half of its operating budget, while students confront disproportionate tuition hikes; (2) taken measures to protect and expand tax exemptions for private corporations; (3) encouraged, with the collaboration of the local government, a so-called labor reform that brings the country back to labor conditions akin to those in the nineteenth century; (4) taken decisions to undermine local credit unions in favor of commercial banks; (5) supported the overhaul of the public education system by means of privatization, especially with the charter school system; (6) stimulated the “flexibilization” of environmental laws; and (7) supported efforts to privatize public corporations such as the public energy corporation.

Since Hurricanes Irma and, especially, María wrought ineffable devastation throughout the archipelago in 2017, neither the FOMB nor the local government have deviated from this organized neoliberal plan for the remaking of Puerto Rico’s economy to suit the interests of private and foreign entities. Rather, they have cynically capitalized on the dramatic suffering and trauma of everyday Puerto Ricans —many of whom have been forced to flee the country as unrecognized climate refugees, or are still living under blue tarps with only intermittent access to electricity—in order to push their plan through. If anything, the intensification of the crisis through these policies has become all the more evident in recent months.

In the midst of this dire situation, Puerto Ricans “on the ground” and in the commons are illuminating the way toward another, and better, country. In fact, as it has been amply documented, most of the impoverished people’s needs were covered, in the immediate aftermath of Irma and María, and until today, through communitarian autogestión (autonomous self-organization). Autogestión, which is amplified through affective and material solidarity networks, are organized and deployed at the margins of both the local and federal government apparatuses, as well as independently from the multinational corporations that, through massive tax exemptions and precarious labor laws, have come to control Puerto Rico’s dependent economy.

Moreover, recent phenomena confirm the creation of new public spaces and democratic imaginaries for thinking anew the question of decolonization in Puerto Rico. Among these initiatives are: (1) the numerous ecological struggles that have contested corporate-led contamination and irresponsible development in communities such as Tallaboa, Peñuelas and Playuela, Aguadilla, alongside a significant rise in agro-ecological projects; (2) the increasing support for clean, solar energy and its independence from private, or privatized, corporations, especially around the work of Casa Pueblo in Adjuntas and IDEBAJO in the southeastern coast; (3) the significant opposition to the FOMB from multiple social justice organizations, such as JunteGente, ¡Dignidad!, and Se acabaron las promesas; (4) the mounting support for a citizen-led, transparent debt audit that would also bring the guilty parties to justice, exemplified by the Frente Ciudadano por la Auditoría de la Deuda (Citizen Front for the Debt Audit); (5) the continual struggle in defense of public and accessible education, both at the school and university levels; and (6) the vibrant resurgence of street and independent art, theater, and performance, with such collectives as Papel Machete, Agua, sol y sereno, Vueltabajo Colectivo and Bemba PR. Characterized also by autogestión, these movements of the commons have been shaping profound and diverse sovereignties that, I believe, constitute routes toward decolonization outside of the established institutional frameworks, which have in many ways led to the crisis and repeatedly betrayed Puerto Rican communities.

Today, on July 17, 2019 (17J), only four months later, reports in El Nuevo Día indicate that close to 500,000 people of all stripes of life took the streets of the capital city of San Juan as rightfully theirs, while an unsung amount of people did the same in multiple towns and cities all over the Puerto Rican archipelago (including Vieques), its diasporas, and multiple U.S. and other international cities. Their main demand on which everyone agrees? The resignation of Puerto Rico’s pro-annexation governor, Ricardo Roselló, who is the son, by the way, of Pedro Roselló, the country’s governor from 1993 thru 2001 and one of the main artifices of the neoliberal “turn.”

Simultaneously, different sectors of the multitude demand much more (and there are significant disagreements here):

In light of these recent developments in the country, and now trembling with expectation, I can confirm that there is an even more intense, and equally longstanding, love for the island, as opposed to its loathing. This love has nothing to do with “light nationalism” or touristy campaigns, which are, as a matter of fact, inherent to Puerto Rico’s crisis. Many in Puerto Rico have recently commented that hurricane María and, especially, our face-to-face encounter with bare life and the total abandonment of the state, changed us. I believe this to be true, but I also believe there is much more historical, affective, and political density to this transformation that has resulted in 17J, the most colossal demonstration of public power in Puerto Rican history. This density must be understood not only in terms of historical time, but in terms of a time much more protracted, akin to the time of geology.

I believe 17J and, as I write this, the ongoing calls for continued public protest to force the governor’s resignation or, were he to continue his refusal, to achieve his impeachment, as well as for the organization of participatory, democratic forms of archipelago-building, are the result of a Caribbean-wide history of maroonage, resistance, and endurance that travels and unites us, as Brathwaite famously declared, submarinely. We honor the submarine corals made from the bodies of our enslaved, our migrants, our poor, our women, our queers, our dispossessed, our freedom-seekers. In and through them, we, Antilleans, islanders, Caribbean peoples, stand united. The maroons are deathless. We are deathless.

Beatriz Llenín Figueroa is an adjunct professor in the Humanities Department at University of Puerto Rico’s Mayagüez Campus. She is an independent writer, editor, and translator. She is also an Associate Editor at Editora Educación Emergente (EEE)