It’s Time for CUNY to Say Goodbye to Cops: Fighting for a Free University 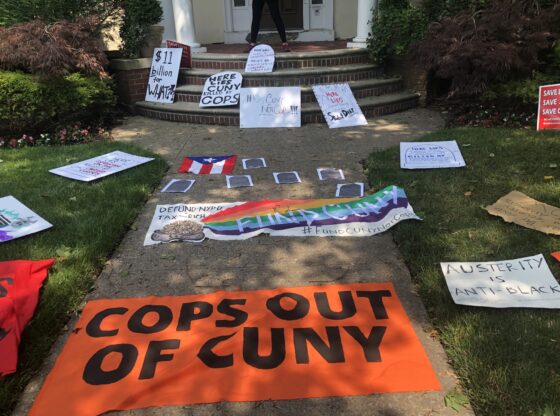 Defunding the police sounds radical until you realize that we’ve been defunding education for years. Calls to defund the police do so in recognition of the inverse relationship between increasing city budgets for policing and decreasing funding for social services—including public education. As students from across City University of New York (CUNY) campuses who have been organizing since before the recent uprisings, it is clear to us that we must demand that CUNY divest the millions of dollars that each campus spends on security; sever ties with the New York Police Department (NYPD); and invest in the resources that actually create safe and thriving campuses and communities.

CUNY was initially established as an inexpensive way for working-class whites to access upward mobility through education and credentialing. This all began to change once minoritized communities demanded access to quality public higher education too. While the radical Black and student-of-color-led struggle for open admissions at CUNY forced the university system to open its doors to previously-excluded students in 1969, the introduction of tuition in the 1976, justified by fiscal austerity, served to re-instantiate the racist exclusions that marked CUNY from its founding. Even as CUNY prides itself on being “one of the most diverse university systems in the nation,” we see a university system that replicates the same forms of exclusion, policing, and oppression that shape our everyday lives. In this moment of uprisings against police killing and for Black lives, coupled with a pandemic that disproportionately affects Black people and other people of color, we ask: is the current university prepared to take the measures necessary to create a safe atmosphere for Black and brown students?

Just as the national uprising sparked by the murder of George Floyd, Tony McDade, and Breonna Taylor is a response to deadly and racist policing, so too are we rising up against the danger of policing on our campuses. Campus police, euphemistically-titled School Resource Officers (SROs), originated in the 1950s, and their presence on college campuses was enlarged in the 1990s, heavily subsidized by the Department of Justice’s Community Oriented Policing Services and part of the broader transition to “broken windows” policing. But the relationship between CUNY and policing is even more nefarious than the presence of SROs. CUNY’s John Jay College of Criminal Justice—established in 1964 as grassroots movements against police violence and for Black and Puerto Rican liberation were surging in New York City’s streets — provides a tuition-free program for active NYPD officers and supervisors offering courses such as Police Ethics and Counter-Terrorism for Law Enforcement – and is currently host to the expansion of the city’s Department of Correction’s Corrections Officer Academy (offering “training” for current Corrections Officers) and the CEEDS recruitment program targeting CUNY students. Hence, CUNY doesn’t merely employ armed security guards, it provides continued justification for the spurious notion that police and correction officers can be “trained” out of anti-Black, anti-Indigenous, anti-trans, anti-immigrant, anti-ableist violence.

While the violence of policing transcends campuses, extending to the very root of our society’s arrangement of power, the longstanding efforts to militarize campuses, particularly urban colleges, originated to suppress campus uprisings against imperialism and domestic racism. Since the 1960s, the fight for a truly liberated and revolutionary education for working class people of color has necessarily been a fight against policing and against white supremacist ideologies that are prevalent in CUNY campuses, even as that legacy of struggle has been co-opted by administrators pursuing austerity budgets. In the 1970s and today, CUNY students knew that under the guise of fiscal responsibility, our campuses would become more and more hostile not only to Black and Brown working class students, but to our persistent demands for radical education.

One such instance occurred at Hunter College on March 4, 2010, when police officers refused entrance to anyone that did not immediately display Hunter identification, locking students and staff out of the school for hours. This action was a paranoid and reactionary response triggered by student-led protests to tuition hikes and other concerns. Similarly, at meetings where the Board of Trustees make decisions to raise tuition and implement new fees, Peace Officers are repeatedly deployed to suppress students. In 2011, fifteen students were arrested protesting a proposed tuition hike, when “Public Safety” officers beat protestors with batons in the lobby of the Baruch College campus. More recently, at a Board of Trustees meeting on December 17th, 2019, a student protesting a proposed tuition hike was arrested and detained by CUNY Peace Officers. In addition to deploying violent campus security to quell student unrest, CUNY’s campuses retain a Memorandum of Understanding with the NYPD, which states that police presence is warranted on campus in the case of an “emergency” and simultaneously extol their close relationships with the NYPD. Above all police, under any name, will only ever stand between people and a free university that serves BIPOC students.

Far from protecting students, security on CUNY’s campuses reproduces the criminalization, surveillance, and punishment of dissent that Black and Brown working class New Yorkers experience in their communities, neighborhoods, and homes. CUNY campuses, for many Black and Brown students, are less than welcoming. Campus entrances act as institutional checkpoints, where Black and Brown students are targets for harassment and are chased and threatened with removal if they forget to flash their IDs, and community members are barred entry to what ought to be a public resource. Identification checks are not only highly racialized, they invoke class as well: for to even hold an up-to-date identification card means one has paid full tuition each semester.

Policing on college campuses ensures that the right of learning is only granted to those who look, speak, walk, and act the right (white) way—even when these spaces are purportedly public institutions. And this form of policing is broader than the rogue action of belligerent “public safety” officers. The logic of policing extends to everyday interactions in our college communities, where the policing of language, of dissent, of gender and sexuality, contribute to the ongoing violence that oppressed and marginalized students, staff, and faculty face at the hands of more powerful administrators.

The gates that enclose many CUNY campuses have a distorting effect on the surrounding neighborhoods, homes, and people, pitting campuses against the neighborhoods in which they are situated and to whom they ought to be responsive. CUNY is charged with the moral, legal, and social responsibility of keeping students safe; yet it exercises that responsibility by weaponizing the logic of safety against members of the working-class communities in which CUNY campuses are located and many CUNY students live and work. Instead of recognizing that the harms and violence CUNY students face are most often from racism, classism, sexism, transphobia, homophobia, xenophobia, and ableism within academic institutions, CUNY campus security treats the threats to our safety as originating outside the campus gates.

Police are an expected part of campus life in part because our campuses are encapsulated in neighborhoods where anti-Black police violence is routine and longstanding. For example, in 1997, Haitian migrant Abner Louima was taken into police custody after local law enforcement responded to a disturbance at a club on Flatbush. While at the 70th precinct, less than 10 minutes away from Brooklyn College, police officer Justin Volpe raped Louima and threatened to kill him if he told anyone. While two decades have passed since, and although the neighborhood’s demographic has changed due to gentrification, the policing of Black and Brown folks in the neighborhood has not.

Following the recent rebellions, police have responded to threats to their legitimacy with increasing brutality. On May 30th, dozens of cops in riot gear swarmed Ocean Avenue, claiming they were responding to fireworks complaints. They cut off the streets, aimed flashlights in people’s faces, and threatened neighborhood residents with arrests. We cannot call for a cop-free campus without interrogating the campus’s relationship to the brutality of the police on surrounding streets and blocks. The call for CUNY to divest from policing must be in solidarity with the call to abolish the NYPD, for our campuses cannot be safe unless our neighborhoods are safe, too.

When we refuse the University’s attempts to define safety and community (and who deserves them), we can shift away from a punitive and carceral logic that only furthers harm, and combat the things that actively hurt CUNY students –– food insecurity, homelessness, sexual assault, and police, including ICE and military recruiters. The cops on campus will not feed the over 20 percent of CUNY undergrads who are food insecure. The millions that CUNY currently spends on security, when redirected towards free tuition, MetroCards, and childcare services, could actually create the conditions of material security for working class students.

One model of true community safety can be found at the Kingsborough Community College Urban farm, where farm workers bring into being a University space that provides for the community. The farm provides 3,000 pounds of free organic vegetables, flowers, and herbs not only to the Kingsborough Community College students, but to the larger Brooklyn Community. In addition, the farm serves as a safe haven for BIPOC students and queer and trans students on a conservative campus.

The near-totality of college campuses in the U.S. employ armed security and maintain close ties with local police forces. Thus, the University of Minnesota’s recent decision to cut ties with their city’s police department is one of the many possible expressions of abolitionist sentiments being realized by and through the U.S. university. As important as these initial efforts are, abolitionists–on campus and in communities–must remain vigilant. In places like Camden, New Jersey, we have seen our demands to defund and abolish the police co-opted, and the violence of policing only intensifying. Abolition, as we understand it, is an intersectional and revolutionary approach to re-imagining the way we respond to harm, and envision new models of care for ourselves and for our communities. True abolition is not just cutting ties with the police, but breaking down systems of white supremacy and anti-Blackness.

Our freedom as students and faculty relies on the disruption and elimination not only of the prison industrial complex and the police, but the elimination of the university’s dependency on them. As one of the nation’s biggest public university systems, CUNY can no longer ignore the abolitionist demands of the students that also make it one of the most diverse university systems in the world. We refuse to wait around for CUNY bureaucrats to give us what we deserve. Across CUNY, students are already organizing to create safety outside of policing; the administration can join us, or get out of the way.

Teona Pagan, Daniel Vázquez, Elizabeth Bazile, Hailey Lam, and Diana Kennedy are current and former CUNY students organizing for a free CUNY and a world without police, jails, and all forms of institutional violence and oppression.