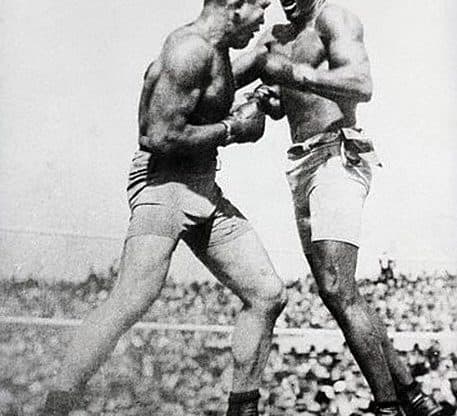 Jack Johnson fighting Jim Jeffries on July 4, 1910, in Reno, Nevada
The Abusable Past |

In May 2019, sports media fawned over a high school track and field star, Matthew Boling, after footage of the young star’s trio of victories went viral. Winning the 100 meter dash, long-jump, and 4 x 400 meter relay at the Texas state championship, Boling became an instant media sensation because his dominance was depicted as oppositional to normative scripts: i.e., Boling is white.

Boling quickly became known as “White Lightning” after an ESPN Commentator used the nickname to describe him in a video of the race, in which Bolin was the lone white runner. The commentator expressed that “This kid, who is clearly less athletic than everybody else, is using his grit and determination to beat all of these other faster more athletic people.”

While empirically untrue, it’s difficult to imagine a time when Black athletes were not so readily depicted as naturally and/or unfairly talented. Cultural theorist Stuart Hall wrote pointedly about racist depictions of “naturally” talented Black athletes and representation in his 1997 essay “The Spectacle of the Other.” In order to maintain a sense of cultural influence and intellectual dominance, Hall deduced that white supremacy had fabricated a binary in which, for white people, culture was opposed to nature, whereas “for blacks, ‘Culture’ and ‘Nature’ were interchangeable.” In other words, if the dominance of east African long-distance runners could be attributed to their high-altitude upbringings, and Jamaican sprinting success could be credited to a genetic anomaly found in people of west African origin, white physical inferiority would not only have a logic, but be seen as unfair.

However, in the United States, a white supremacist notion of superior intellectual and physical dominance was the hegemonic norm until a celebration of American independence and patriotism was reframed just over 100 years ago – on July 4, 1910 – when Black boxer, Jack Johnson, knocked out white heavy weight world champion Jim Jefferies, in one of the most highly anticipated sporting events in history.

Born in Galveston, Texas on March 31, 1878, Johnson entered the world one year after reconstruction ended, when the federal government abandoned its attempts to redress the ravages of slavery. Prize fighting was mostly prohibited at the time, with bouts being held in off-shore barges and farmers’ fields. When Johnson began fighting, and the move to legalization began, British-American rivalries fueled the sport and elevated boxers to nationalist and heroic celebrity status. However, it remained highly segregated.

Johnson became incredibly dominant over the years in Black circles, earning decent money and garnering national attention. He developed a unique, defensive style; instead of dodging jabs side to side, he would continuously pull back, tire out his opponents, and pummel them into oblivion. The media found any way they could to scrutinize Johnson. Whereas white boxers like Jim Corbett (“Gentleman Jim”) were praised for clever tactics, Johnson’s innovative style was depicted as lazy, deceptive, and deceitful. While Jim Jefferies was celebrated for his impeccable strength, Johnson’s physical resilience was attributed to him having a thicker skull.

Johnson and Jefferies, during the turn of the century, became known in their separate racial fighting domains as the greatest heavyweights of all time. Despite Johnson’s relentless goading, however, Jefferies refused to face him in the ring. When he retired in 1905, Jefferies declared himself the “undefeated champion.”

Canadian Tommy Burns replaced Jefferies as the reigning white heavy weight champion. While he, too, initially rejected Johnson’s invitation to join him in the ring, money would change his mind. After gargantuan media appearances and prize money were offered to fight Johnson, Burns succumbed and agreed to compete, and Johnson knocked him out in 14 rounds.

Sociologist Ben Carrington has cited the fight between Johnson and Burns in Sydney, Australia, on December 26, 1908, as the day “the powerful fantasmic figure – ‘the black athlete’” was created. While Carrington’s astute analysis in Race, Sports, and Politics, has provided esteemed insights to sports’ role in the creation of race and culture, it must also be noted that many considered Johnson’s 1908 victory as illegitimate.

The myth of white physical superiority, according to the white masses at the time, had still not been undone. Jefferies was still considered the true heavy weight champion; he retired undefeated, and the proper way to dethrone a champion was to be victorious in the ring.

Thus, the lingering question of whether or not Johnson could defeat Jefferies returned in full force. With growing public interest and money to be made, the $65,000 up for grabs for a fight between the two meant that Jefferies had no choice but to accept the offer. He would come out of retirement and train tirelessly, earning the nickname America’s “Great White Hope” and defeat Johnson, “for the sole purpose,” Jefferies said, “of proving that a white man is better than a negro.”

“The Fight of the Century” was held in Reno, Nevada, on the country’s birthday – July 4, 1910 – making the match not only about racial physical superiority, but who would be given the claim to celebrate the day commemorating the independence of a colonial slave state.

Over the course of 15 rounds, Johnson, while mocking Jefferies and taunting his ring-side supporters, made it abundantly clear that Jefferies’ undefeated reign was coming to a sanctioned end. Jefferies failed to reify a white superiority; he failed to live up to the expectation to uphold America’s “Great White Hope.”

Throughout the country a procession of race riots followed the match. It was more chaotic than a July 4th holiday had ever been, and perhaps among the more momentous Independence Days celebrated in American history. The metaphorical and material convergence of the knockout of America’s “Great White Hope” could, and would, shed light on the feeble foundation considered to be the origin of the nation.

Juxtaposing the reception, performance, and aftermath of Jack Johnson’s tide-shifting fight and Matthew Boling’s recent breakout competition offers ways of thinking about how normative understandings of race and racism have indeed changed, while still being amenable to white supremacist discourses. Historicizing these ideas about racial physical dominance in sports and politics sheds light on how misconceived ideas get attributed to jubilant national holidays.

Rather than commemorate a Declaration of Independence that inaugurated the rise of a slave-owning settler state on July 4, perhaps Jackson’s counterpunch against racism and segregation in sports might be a more welcome occasion for parades and fireworks.

Note: A previous version of this post incorrectly noted that John L. Sullivan was nicknamed “Gentleman Jim.” However, the moniker actually refers to James Corbett, who defeated Sullivan.

Hannah Borenstein is a PhD candidate in Cultural Anthropology at Duke University. She is interested in the intersections of sports, labor, race, gender, capitalism. Her dissertation research is about women long-distance runners in Ethiopia navigating transnational networks of people, corporations, and capital.

Countereditorial: Gay Rights Is Over, but I Like Rice Pudding — A Response to James Kirchick
Stonewall is a Sanctuary