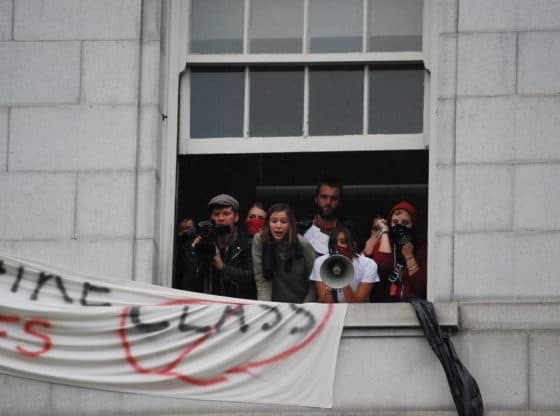 This microsyllabus eschews some of the more canonical texts in the burgeoning field of critical university studies – texts like Marc Bousquet’s How the University Works (NYU Press, 2008) or the growing roster of publications in John Hopkins University Press’s Critical University Studies book series –  in favor of more heterodox selections. We think the texts below point the way to new and more radical directions for future research and scholarship on universities which directly problematize race, gender, and coloniality in addition to the emphasis in older work on the casualization of academic labor and the effects of financialization and state disinvestment.  By revealing such deeply rooted structures of domination and oppression in academia and by exploring these structures’ complex intersections, they push beyond a tendency in university studies (“critical” or otherwise) to romanticize certain academic ideals, such as the academic vocation, the public university, and academic freedom. Our microsyllabus compiles research on universities from multiple and disparate disciplinary formations.  We believe that, together, these texts suggest the arc of recent critical inquiries into universities’ history and organization as well as multiple possible ways forward.

Craig Steven Wilder’s Ebony and Ivy is an invaluable excavation of how deeply US universities were involved in the transatlantic slave trade and the dispossession and genocide of North America’s indigenous peoples in the seventeenth and eighteenth centuries.  Wilder reveals how universities weren’t just complicit in transoceanic regimes of racialization and exploitation – in many instances they were engines of empire and laboratories for new forms of counterinsurgency and investment.  At the dawn of English colonialism in the New World, colleges like Harvard, Wilder writes, “supplied the administrations of the colonies, supported domestic institutions, and advanced Christian rule over Native peoples.”  Wilder thus charts the long history of universities’ involvement in slavery and colonialism from extracting the labor and rendering as a dehumanized object the first “moor” owned by Harvard’s first instructor to institutions’ role as “imperial instruments akin to armories and forts, a part of the colonial garrison with the specific responsibilities to train ministers and missionaries, convert indigenous peoples and soften cultural resistance, and extend European rule over foreign nations.”  Wilder’s history, by foregrounding both universities’ ideological work and their exploitation of labor and accumulation of capital, firmly situates the university as a central node of transatlantic racial capitalism almost since its origin. In linking the material and ideological so seamlessly, Wilder offers critical university studies a way forward that circumvents both a narrow focus on academic labor and the presentism and idealism underlying much of the liberal ideology critique that has framed many of the most widely-read accounts of “the corporate university.”

Roderick Ferguson, We Demand: The University and Student Protests (University of California Press, 2017).

In this indispensable and succinct book, part of UC Press’s American Studies Now series, Ferguson explores the radicalism, containment, and legacy of the student movements of the 1960s and 1970s, what their containment and cooptation tells us about the relationships between universities, capitalism, and the state, and what lessons the student movements of the present might draw from these histories.  Framed with an epistolary introduction addressed to contemporary student activists, Ferguson’s book charts the relationship between the rise of diversity discourse and the expansion of university police power, locates universities, and the repression and cooptation of student movements as a critical laboratory for the rise of neoliberalism.  Ferguson’s reading centers the 1971 Powell Memorandum, which sought to counter the student-led liberation movements of the previous decade in part by weaponizing a “defanged” and “deraced” discourse of diversity in order to “highlight white diversity,” portraying “the American business executive” as a persecuted minority and thus to “benefit” the institutional imperatives of university administrators and corporate executives.  He centers the Freedom Schools of the civil rights movement and student activism at the City University of New York, San Francisco State, and the University of California-San Diego as exemplary of the radical imagination of the postwar demos, as examples of “forces that rightfully understood that imagination and intellection exercised on behalf of the minoritized are more robust and more advanced than what any administration can offer.”  We Demand is an optimistic text, one which endeavors to directly address, at various moments throughout the text, the contemporary inheritors of the legacies of the postwar student liberation movements. This is particularly effective in the book’s short conclusion, which lays out 11 rules, drawn from the histories of those struggles and their institutionalization, for readers to adopt and adapt in their own scholarly and organizing work.  These axioms mark the contingency of incorporation into the university’s imperatives (“Rule 6 – assume you don’t belong”; “Rule 5 – When institutions say yes, that is also a moment of Jeopardy”), and explicitly draw on the intellectual legacies and worldmaking projects of Black Studies, Chicanx Studies, Disability Studies, and Queer of Color Critique. (“Rule 9 – We are part of long and courageous efforts of human recovery that someone took the time to imagine, and our political visions must be grounded there.”)

Doyle’s book is a powerfully written critique of universities’ financialized risk-management approach to sexual violence and student protest.  Doyle adeptly and sensitively rethinks several high-profile recent university-based struggles and incidents, from John Pike’s gassing of student protesters at UC Davis during the Occupy movement–which then-chancellor Linda Katehi justified by claiming that protesters were outsiders threatening the “very young girls” who comprised the student body–to the Penn State students who rioted in support of their disgraced football coach.  In tracing the connections between struggles over sex on campus and the securitization of on- and off-campus spaces, Doyle provides valuable insight into how the financialization of the university has bureaucratized the management of sexuality and linked administrative power and sexual violence.

In this thoroughly researched survey of Black students’ movements on US university campuses in the long 1960s, Kendi offers a nuanced analysis of the racist structures that the students struggled against as well as the tensions between different political tendencies within their movements. The book also situates the Black students’ 1960s radicalism within the historical context of the long Black freedom movement. With a wide geographic scope across the terrains of both historically black and historically white colleges and universities (HBCUs and HWCUs), Kendi examines many dozens of different groups, highlighting their commonalities and differences. The book makes important contributions in showing bridges between the activism at the HBCUs and HWCUs, as well as by decentering the HWCUs through highlighting the radical organizing of Black students at the HBCUs, situating the initial sparks of the movement at HBCUs in the rise of campus activism after the assassination of Malcolm X and the beating of marchers in Selma in 1965. After detailing the students’ radical imaginations for abolishing the “White University” and creating a “Black University,” Kendi also describes the processes of backlash, repression, and recuperation that limited the students’ realization of their freedom dreams.”

Melamed gives a history of how, after World War II led to a break from the white supremacist racial order, new forms of racial capitalism emerged that work through official kinds of anti-racism. Her book offers practitioners of Critical University Studies a nuanced theory of multiculturalism that they need in order to dismantle the seemingly opposed tendencies of, on the one hand, co-optive administrative uses of ‘diversity,’ and on the other, leftists’ reductionist critiques of ‘identity politics.’ Melamed presents conceptual tools for distinguishing between, and historically contextualizing, different varieties of official anti-racisms — including racial liberalism and liberal and neoliberal multiculturalisms — in contrast with alternative, “race radical” versions of multiculturalism, such as those grounded in indigenous cultural activism.

In this collection of theoretically and poetically rich essays and an interview, Harney and Moten call for deromanticizing the university in favor of grappling with the question of how a subversive intellectual can be in but not of the university, treating it as a place of refuge and resources while refusing to sell out through professionalization. Against attempts to disqualify those who are marginalized and made precarious in the university as “unprofessional,” Harney and Moten call on them to organize “maroon communities” and to engage in a perpetual war in which they must collectively “problematize themselves, problematize the university, force the university to consider them a problem, a danger.”

This literature review article gives a constructive critique of the field of critical university studies. Boggs and Mitchell identify a consensus on the use of narratives of “crisis” for describing the problems of higher education today, which limits the possibilities for more radical ways of imagining and organizing around universities. To set out avenues for breaking with this “crisis consensus,” they highlight six books that “build on and depart from the most widely available articulations of [critical university studies] scholarship,” including more in-depth engagements with three of the books that we covered in this microsyllabus (Doyle, Harney and Moten, and Wilder) as well as three other important books (Tressie McMillan Cottom’s Lower Ed: The Troubling Rise of For-Profit Colleges in the New Economy, Piya Chatterjee and Sunaina Maira’s edited volume, The Imperial University: Academic Repression and Scholarly Dissent, and Roderick Ferguson’s The Reorder of Things: The University and Its Pedagogies of Minority Difference).

Zach Schwartz-Weinstein is a historian of university service labor.  He received his PhD in American Studies from New York University’s Department of Social and Cultural Analysis and currently teaches for the Bard Prison Initiative.  His writing has appeared in Social Text, The New Inquiry, In These Times, and Truthout, and he is currently working on a book about the history of the labor struggles waged by food service and maintenance workers at Yale University.

Eli Meyerhoff is a political theorist who wrote a book, Beyond Education: Radical Studying for Another World (forthcoming the University of Minnesota Press in July 2019), which calls to deromanticize education and reframe universities as terrains of struggle between alternative modes of studying and world-making. He has a PhD in Political Science from the University of Minnesota, and is currently working in an academic staff position as the program coordinator of the Social Movements Lab at Duke University. Along with Zach, he is a collective member of Abolition: A Journal of Insurgent Politics.

Forum 1.5 // The Precarity of Peer Review, by Eli Thorkelson (precarious ethnographer)
Red Joan and the Myth of Gay Communist Blackmail