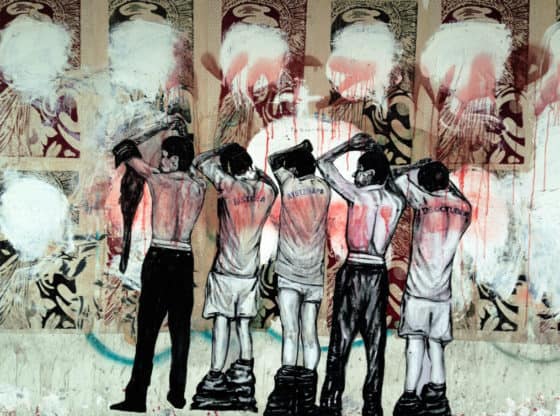 In September 2014, 43 students from the Ayotzinapa Rural Teachers’ College, a school designed to train rural teachers in Mexico, were brutally attacked and disappeared by local police in the city of Iguala, Guerrero. Independent investigations and reports confirmed that the police handed the 43 students over to a drug cartel, which then disposed of the bodies. In addition, the mayor of Iguala and his wife were implicated in sanctioning the slaughter. Ironically, the students had planned to commandeer the buses they were using to travel to Mexico City in order to participate in the annual march commemorating the 1968 Tlateloco student massacre.

The disappearance of the Ayotzinapa students catalyzed a torrent of protests in the Mexican capital that lasted for several months and which continue to take place today, but with less frequency. The slogan “fue el estado” (“it was the state”), entered the popular vernacular and transformed into a clarion call for mass mobilizations against police brutality, impunity, and the PRI-led government of Enrique Peña Nieto. Naturally, people were horrified when they caught wind of the incident.  Yet many were unsurprised by the barbarism carried out by the police and the state. This event had clear precedents.

Most Mexicans were familiar with the long and complicated history between students and the state. Being a radical student activist in Mexico comes with huge risks. Many cases of politically related student disappearances continue to occur in this present political moment. Not since the Cold War era, in particular the 1960s and 1970s, have so many students been victims of state repression. Today, the government has reappropriated tactics of the counterinsurgency apparatus used to exterminate urban guerrilla movements in the 1970s and aimed them at radical student activists.

The following microsyllabus is intended to introduce readers to the history of student movements in contemporary Mexico and their relationship with radical political culture.

If there is someone capable of writing about controversial subjects that uncover the direct links between organized crime and the government, Anabel Hernández is the person for the job. She is perhaps the best investigative journalist to have written about the disappearance of the 43 Ayotzinapa students. Hernández provides a passionately written and transcendent account of the events that transpired and the social and political aftershocks they produced. As Hernández shows, the cover-up that followed was an all-too-common ploy by the government to exonerate itself of any wrongdoing and to criminalize the students in the echo chamber of the media. Indeed, the government’s feeble attempt to bring the perpetrators to justice also demonstrates the level of impunity enjoyed by that police and bureaucratic officials. Hernández was able to access official government documents and footage from that night, which puts her work above much of the existing material published about the disappearance of “the 43.” As a result, she and the families of the victims are able to challenge the version put forward by the Peña Nieto administration, which “manufacture[d] guilty parties” (through forced confessions and coercion) that implicated drug cartels and not the state agents. In addition to telling the story of “the 43,” the book also comments on the dangers of being a student (activist) and the repressive tactics that PRI-regimes direct at citizens that don’t conform to the ideas of the state. The title of the book, A Massacre in Mexico, is taken from the title of a collection of short testimonies from the 1968 student movement compiled by the renowned author and public intellectual, Elena Poniatowska. From a historical standpoint, the title implies continuity in the way the state deals with rebellious youth and how today—as in 1968—the perpetrators go unpunished.

Sergio Arturo Sánchez Parra, one of the leading historians of student radicalism in post-1968 Mexico, offers a comprehensive account of Los Enfermos (The Sick Ones), from its origins as a student organization to its transformation into a leading guerrilla movement during the revolutionary seventies. Sánchez Parra expertly intertwines the Autonomous University of Sinaloa’s evolution into a powerful social justice entity in the service of the masses and its transformation into a hotbed of student revolutionary politics. Sánchez Parra shows that student activism has always been a part of the UAS’s political culture. Under the tutelage of the Federación de Estudiantes Universitarios de Sinaloa, or Federation of University Students of Sinaloa (FEUS), thousands of students fought against state-sponsored student groups, corrupt academic administrators, and bourgeois encroachment in university affairs. A significant turning point in the history of the FEUS occurred when the governor of Sinaloa and the Board of Regents appointed a reactionary PRI bureaucrat to the rectorship in 1970. News of the appointment unleashed a massive student movement. In response, the governor summoned the police, military, and conservative students to quell the rebellion and restore order. State-repression, however, exacerbated the situation, by further radicalizing the student movement and expanding the clout of the Communist Youth and other Marxist-leaning groups. Following attempts to repress student activism, a revolutionary faction of the FEUS, calling itself Los Enfermos, rose to prominence and advocated in favor of a larger revolutionary project that entailed the establishment of socialism via the armed struggle. When the rector finally resigned in 1972, the student movement appeared to be over, but Los Enfermos capitalized on the residual momentum to propose a revolutionary proletarian revolution. Sánchez Parra shows that in contrast to other urban guerrilla movements during the seventies, Los Enfermos were able to construct a substantial mass base made up of workers and peasants who supported their revolutionary project. In 1973, Los Enfermos joined forces with other revolutionary movements to form a national guerrilla movement called the Liga Comunista 23 de Septiembre.

Published in 2005, Elaine Carey’s, Plaza of Sacrifice was a welcome addition to the extensive scholarship on the 1968 student movement. Unlike previous work on the topic, Carey’s book offers an extensive examination of the gender dynamics of student activism in addition to challenging the overrepresentation of Spanish academic and non-academic writers in the historiography of the movement. Carey asserts that the 1968 student movement was the culmination not only of decades of social and political unrest, but also resistance to Mexico’s conservative society and the ruling party’s hegemony and appropriation of the Mexican Revolution’s legacy. Moreover, she stresses that, along with the political and social implications the student movement had on Mexican politics, the movement fashioned an avenue where gender roles were meaningfully challenged . Despite Mexico’s highly machista society, the student movement made an effort to incorporate women’s issues into their agenda by being the first to place women in powerful positions within the movement.

Tanalís Padilla, “‘Latent Sites of Agitation’: Normalistas Rurales and Chihuahua’s Agrarian Struggle in the 1960s,” in Jaime Pensado and Enrique Ochoa, ed. Mexico Beyond 1968: Revolutionaries, Radicals, and Repression During the Global Sixties and the Subversive Seventies (Tucson: University of Arizona Press, 2018).

Tanalís Padilla has a long history of exploring agrarian politics and movements. Her first book, Rural Resistance in the Land of Zapata: The Jaramillista Movement and the Myth of the Pax-Priísta, 1940-1962is a radical contribution to Mexican historiography that dismantles myths about the Institutional Revolutionary Party’s hegemony. Padilla’s next book, tentatively titled, “The Unintended Lessons of Revolution: School Teachers in the Mexican Countryside, 1940-1980,” examines how rural schools (normales) transformed into major spaces of government discontent and their students into social justice crusaders. This book chapter gives readers a small taste of Padilla’s larger forthcoming manuscript project. According to Padilla, the politicization of normalistas (rural school students) is profoundly linked to the enactment of comprehensive education reforms and socialist-inspired pedagogy by the President Lázaro Cárdenas (1934-1960). Even though socialist education fell victim to the PRI’s conservative shift in the 1940s, the normales survived, and the radical political culture that had been forged in the Cárdenas years remained, for the most part, intact. While normalistas dealt with issues pertaining to their education they also tackled matters that were of major concern to their communities, particularly agrarian issues. Padilla shows that normalistas felt a responsibility to their communities that went beyond merely producing of the next generation of rural teachers. By aligning with agrarian struggles, normalistastransformed into a powerful political front and built a culture of political activism that they continue to wear as a badge of honor today, and sometimes, pay dearly for contesting the authority of the state.

In Rebel Mexico, Jaime Pensado offers a compelling and revisionist study of early student activism during the long sixties in Mexico. Pensado breaks away the entrenched narratives about the origins of the 1968 student movement. He suggests that the culture of student activism during the “long sixties” cannot be summed up or defined by a single event. One of the book’s strongest contributions is that it brings to the fore a slew of social actors from the left and right that have been marginalized by the dominant the historical narrative. Anyone familiar with the history of student radicalism in Mexico is aware that militants generally leaned to the left of the political spectrum, and included members of the Communist Youth and Mexican Communist Party. Pensado affords space to analyze and put in context the mindset of the reactionary students, known as porros, funded and armed by the government to dismantle collective student discontent. Pensado also shows that the students who launched strikes, rallies, and other political mobilizations in the early sixties informed the radical politics and protest culture that 68ers’ embraced and built upon. By looking at the evolution of student militancy throughout the long sixties, Pensado broadens our understanding of the origins of the 1968 student movement and challenges the dominant narrative that a single event triggered the largest counterhegemonic movement in the post-revolutionary era. Pensado ends the book by provocatively claiming that the 1968 student movement lacked a defined popular component, the opposite of what scholars, former militants, and student leaders have firmly argued and stood by for the last 50 years. While Pensado’s assertion cuts against the grain of what we think we know about the 1968 student movement and its legacy, it nevertheless gives us something to discuss about how we remember the 1968 movement.

Fernando Herrera Calderón is Associate Professor of Latin American History at the University of Northern Iowa. He specializes in working-class culture, student politics, political violence, and urban social movements in 20th-century Mexico. He is the author of several articles and book chapters, and was co-editor of an edited volume on revolutionary movements in Mexico, Challenging Authoritarianism in Mexico: Revolutionary Struggles and the Dirty War, 1964-1982. His most recent publication is titled,  “Working-Class Heroes: Barrio Consciousness, Student Power, and the Mexican Dirty War,” in Mexico Beyond 1968: Revolutionaries, Radicals, and Repression During the Global Sixties and the Subversive Seventies. Herrera Calderón is also currently finishing a book manuscript titled, “Laboratories of Dissent: Student Power and the Urban Guerrilla Experience in the Mexican Seventies.”

Contesting Police Power: A Conversation between Simon Balto and Max Felker-Kantor
From Puerto Rico: The Maroons Are Deathless, We Are Deathless