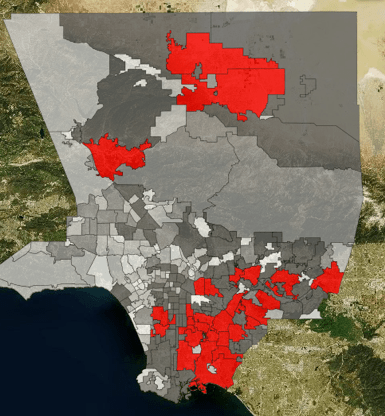 Los Angeles County operates the largest jail system in the United States, which imprisons more people than any other nation on Earth. At a cost of nearly $1 billion annually more than 18,000 people are caged every night in L.A.’s county jails and city lockups. But not every neighborhood is equally impacted by L.A.’s massive jail system. In fact, L.A.’s nearly billion-dollar jail budget is largely committed to incarcerating many people from just a few neighborhoods. In some communities, more than one-million dollars are spent annually on incarceration. These are L.A.’s Million Dollar Hoods.

Launched in September 2016, the MDH website (milliondollarhoods.org) began by hosting digital maps showing how much is spent per neighborhood on incarceration in Los Angeles County. In just over two years, MDH has emerged as a university-based, community-driven, mixed-methods research project that deploys not only data mapping, but also rapid-response reports, oral histories, archives, and policy/movement work with twoclear goals: to document how much mass incarceration has extracted from largely African American, Latino, and working-class communities since the 1970s, and to  help local advocates and activists secure new public investments in the people, families, and communities most impacted by local police and incarceration practices.

MDH’s inaugural mapping project visualized the geography of L.A. County’s incarceration costs and concentrations. Since the Los Angeles Sheriff’s Department (LASD) serves as the city’s primary jailer (post-arraignment incarceration), MDH began by mapping their arrests and booking data. Our team found 31 neighborhoods (see map below) where the LASD spent at least $1 million annually incarcerating its residents. The city’s million dollar hoods are clustered predominantly in the south and southeast, where workless and working people of color have historically lived in the Los Angeles basin. But data shows that as gentrification and displacement have driven those most affected by mass incarceration to the north, spending on incarceration has followed them: The city of of Lancaster now leads LA County in spending on incarceration, spending a treasury depleting sum of over $82 million on incarceration between 2010 and 2015, besting the runner-up Palmdale by $20 million.

Since 2017, the MDH project has expanded. MDH now issues rapid-response research reports to spotlight emerging trends in local policing. Some of our reports and their impact are described below. We have also begun to collect oral histories with residents of L.A.’s Million Dollar Hoods. To date, we have collected ninety oral histories addressing love, labor, and life in L.A.’s Million Dollar Hoods.  Also we are currently processing hundreds of boxes of police records, which the LAPD once held in an Iron Mountain secure storage facility. In response to an ongoing lawsuit regarding the California Public Records Act, Professor Lytle Hernandez won access to this cache of previously unreleased and unseen historical records. And, finally, the MDH team fully engages in movement campaigns to shift policy and practice. In particular, we work with advocates advancing a Justice Reinvestment framework, which seeks to move public resources out of policing and into education, health care, housing, and  other services that build stronger, healthier, thriving communities. In sum, these expansions enable MDH to diversify our documentation of the past and present of incarceration in Los Angeles, providing reflexive data analysis and raw human experience of the largest jail system in the country.

We seem to grow a little bit every week.

The MDH team is best described as a collaboration between Professor Kelly Lytle Hernandez (UCLA) and a team of UCLA researchers (including staff and students) alongside local community-based organizations, such as Youth Justice Coalition, Los Angeles Community Action Network, the Los Angeles Black Worker Center, and Dignity and Power Now!. The majority of our team members are African American, Latinx, formerly incarcerated, and residents of L.A.’s Million Dollar Hoods or they come from similar communities across California. The constitution of our team drives our community-oriented and technical approach because the project keeps persons most impacted by mass incarceration at the frontline of analysis.

The MDH team has consistently delivered data analytics that have had a tangible impact on policing in LA County.  For example, soon after the LAPD issued a 2017 report stating that violence was the leading reason for the surging number of homeless arrests in the City of Los Angeles, our team took a close look at LAPD arrest data and found Failure to Appear in Court to be the most-common charge faced by houseless persons arrested by LAPD. This report pushed the LAPD to more accurately report on its arrest data and helped the United Nations Special Rapporteur on Extreme Poverty to determine that local authorities are criminalizing poverty in Los Angeles. Our two reports on the money bail system were the first to document the gargantuan size of the money bail system in Los Angeles and its disproportionate impact upon Black and Latinx communities. In particular, our team documented that more than $20B in money bail has been levied against L.A. residents since 2012 and more than $200M has been paid out in non-refundable bail bond deposits. Reflecting the overall disparities in arrest trends, Latinx and African American community members lost the most through the local money bail system, paying $90M and $40M respectively to secure their constitutional right to freedom before trial. Our bail reports, each entitled “The Price of Freedom,” were widely-cited during the recent campaign to win bail reform legislation in California.  Most recently, our report on the Los Angeles School Police (LASP), “Policing Our Students,” documented staggering disparities impacting Black youth in terms of arrests and citations by school police despite recent efforts to reduce such disparities. The Los Angeles Unified School District directly responded to this report by forming a task force to further reduce youth arrests on school sites.

In addition to its work on contemporary carceral reform, the MDH team has just begun a new foray into archival research. Our first archival project involves creating an inventory of approximately 170 boxes of LAPD historical records. The bulk of the files are records of the Office of Special Services, which housed the infamous Public Disorder Intelligence Division, Narcotics, Vice, and the Organized Crime Intelligence Division, among others. From what we have processed thus far, the records range from the mid 1970s through the 1980s. Undergraduate team members comb through these boxes detailing the contents of folders that have been reviewed and released by the LAPD, while Professor Hernandez and team leader Mark Vestal conference separately with the LAPD over the designation of “exempt” records, documents the LAPD have preliminarily claimed are not disclosable under the California Public Records Act. Progress is slow and piecemeal, but our researchers are already recovering important stories.

Take Alonzo Simmons, who was shot in the stomach by LAPD officers near midnight on July 16, 1976 in Watts. Simmons’ ordeal, it appears, was never reported in the Los Angeles Times, but the historic newspaper of black Los Angeles, The Sentinel, reported what details it could uncover. The LAPD alleged that Simmons and his two companions were possible grand theft auto suspects, spotted by a police helicopter, who fled from police when officers attempted to stop their gold colored station wagon. After a short chase, two arresting officers alleged they shot Simmons in self-defense. The alleged stolen vehicle, in fact, was loaned to Simmons, who had no prior criminal record, and witnesses reported that Simmons was surrendering when shot.

What the Sentinel could not have known was what the LAPD declined to make public at the time: why the LAPD helicopter pilot identified Simmons’ vehicle as a criminal problem in the first place. But, according to an internal investigation our team recovered from LAPD historical records, the pretext for the near fatal encounter was Simmons’ failure to turn on his vehicle’s headlights. No prior report of a stolen vehicle, just a simple traffic violation. It was a small but immensely telling fact about the history of police practice that has made small but lethal assumptions when patrolling the city’s Million Dollar Hoods. Alonzo Simmons’ case was in the first box we processed, and we have over a hundred more to go.

In sum, Million Dollar Hoods has emerged as a research project that embroiders rapid-response data analysis with hard-won, historical recovery while texturizing maps with testimony. Throughout our work, we prioritize asking community-based questions about law-enforcement records. We do this by regularly attending community meetings, holding rebel mapping workshops, and working with youth, activists, and advocates in L.A.’s Million Dollar Hoods to query police data.  By working across the proverbial academy/community divide and deploying a variety of research tools we are unearthing the full human and fiscal toll of the largest jail system in the United States. Indeed, as guided by the work of Nell Irvin Painter on the enslaved South, we are conducting a “fully-loaded cost accounting” of mass incarceration since the 1970s.

Kelly Lytle Hernandez is the Tom E. Lifka Endowed Chair in History and African American Studies at UCLA. She is also the Director of the Ralph J. Bunche Center for African American Studies at UCLA. One of the nation’s leading experts on race, immigration control, and mass incarceration, she is the author of the award-winning books, Migra! A History of the U.S. Border Patrol (University of California Press, 2010), and City of Inmates: Conquest, Rebellion, and the Rise of Human Caging in Los Angeles (University of North Carolina Press, 2017). City of Inmates recently won the 2018 James Rawley Prize from the Organization of American Historians, 2018 Athearn Prize from the Western Historical Association, the 2018 John Hope Franklin Book Prize from the American Studies Association, and the 2018 American Book Award. The book trailer for City of Inmates can be found here. Currently, Professor Lytle Hernandez is the director and principal investigator for Million Dollar Hoods, a university-based, community-driven research project that maps the fiscal and human cost of mass incarceration in Los Angeles. For her leadership on the Million Dollar Hoods research team, Professor Lytle Hernandez was named the 2018 KCET/PBS Local Hero and has received numerous honors, including the 2018 Freedom Now! Award from the Los Angeles Community Action Network and the 2019 Catalyst Award from the South Central LA advocacy collective, CADRE. Professor Lytle Hernandez is also now writings two monographs for Norton Books on the history of race and resistance in the U.S.-Mexico borderlands.

Marques Vestal is the team leader of the Archives Division of Million Dollar Hoods. He is a Eugene Cota Robles Fellow and PhD candidate in the UCLA Department of History whose dissertation, “Paying Rent in the Promise Land, 1929-1965,” explores matters of housing security for Black Angelenos. In an upcoming chapter, Marques will examine Black responses to LAPD home invasions in the decade prior to the Watts Rebellion. His past research projects include histories of Black cooperatives and rent control in Los Angeles.