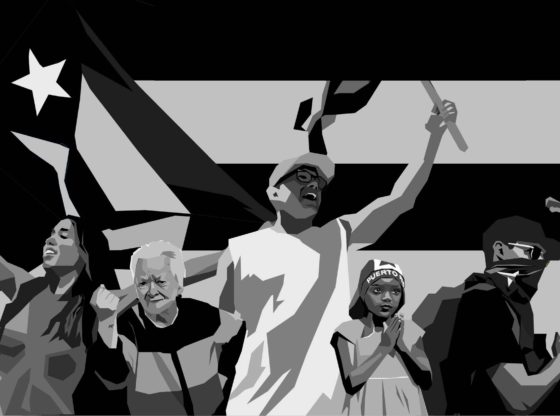 Original artwork by Colectivo La Puerta
The Abusable Past |

On July 17, 2019, between 400,000 and 500,000 people took to the streets in Puerto Rico to demand the resignation of Governor Ricardo Rosselló. Thousands more marched in solidarity in different international cities. That Wednesday marked the fifth consecutive day of the #RickyRenuncia protests in the archipelago, yet it was not to be the last. The undercurrent that brought a plurality of people together, both in Puerto Rico and the diaspora, was the unraveling of Rosselló’s government. By now, multiple news outlets have covered #TelegramGate; the release of 889 pages of a Telegram chat transcript that Rosselló and his cabinet, advisors, and businessmen participated in. In the long, yet incomplete excerpt, chat members made misogynist, homophobic, transphobic, racist, classist, body-shaming, and ableist comments about many public and private individuals. The comments sparked outrage among multiple social and political sectors, across political party affiliations or status ideologies.

Although this movement emerged organically around the #RickyRenuncia demand, the current protest landscape has created a space for claims across class, gender, sexuality, age, religion, and other social identities. Some of these demands come from long-standing grassroots groups and organizations from the labor sector, student organizations from the University of Puerto Rico, and the nationalist movement to mention some examples. Yet, others have emerged spontaneously, without a centralized structure or hierarchy. Chief of Police Henry Escalera publicly requested a meeting with the organizers of the general stoppage scheduled for Monday, July 22, 2019 in the Las Américas highway. He was met with ridicule on social media because there were no leaders, only el pueblo (the people).

While the reaction on the streets has been overwhelming, it should come as no surprise. This mass mobilization is the product of a simmering rage that has been percolating for the past few years, gaining momentum after the recession, university strikes, the imposition of the Fiscal Control Board, the devastating effects and response to Hurricane Maria, and May Day protests of 2017 and 2018. The confluence of these events created a perfect storm. That rage was channeled and erupted into multiple solidarities and introduced new political subjects on to Puerto Rico’s protest landscape. The government could no longer claim it was the same “cuatro gatos” (four cats) that attended the protests, alluding to the “pelús” (long-haired, unruly people) that are a mainstay in activist circles. These events have catalyzed a space where non-traditional protesters have become politicized through their collective participation, seeking a profound change in the archipelago. This has led to an intersectorial solidarity in the movement because of the multiple grievances that Puerto Ricans seek to rectify. In that sense, the movement goes beyond Rosselló’s resignation and is an assemblage of desires, discontents, and demands of people that occupy different social locations and a plurality of sectors.

While the media has focused on the tensions and altercations between riot squad police and protesters, there were other individuals engaging in acts that did not catch the mainstream news’ attention. During the past week, we have seen multiple forms of solidarity among those present at the demonstrations. Residents of the Mariana sector in Humacao prepared and distributed stewed rice for the demonstrators gathered in front of Calle Fortaleza, the street leading up to the Governor’s mansion, which at times resembled a war zone. Others organized solidarity childcare or offered their homes through Facebook as a refuge to those planning to protest until the late hours of the night. When the police used pepper spray and tear gas to disperse the crowds, a group of activists distributed Seattle solution to ease the lacerating effects of the chemical weapons. Other activist groups created fundraising and material donation campaigns to prepare safety kits with gas masks and medications for Wednesday’s massive march and rally. This kind of collective praxis of solidarity is interdependent, yet heterogeneous. It lays bare the failure of the colonial apparatus, while functioning as resistance to neoliberal logics of individualism.

Puerto Rico’s long history of militant protest and massive mobilization created the political infrastructure for the emergence of the #RickyRenuncia social movement. Labor unions and university students, along with socialist, nationalist, and pro-independence movements have been anticolonial protest fixtures for decades. In 1998, during the administration of Governor Pedro Rosselló, Ricardo’s father, a national movement emerged to protest the privatization of the Puerto Rico Telephone Company. Five years later, people from multiple social sectors came together to demand the expulsion of the Navy from the island municipality of Vieques. These became unifying events for Puerto Ricans from different social groups. While smaller in scale, a series of strikes at the University of Puerto Rico in 2005, 2010-11, and 2017 created new cultures of protest and activism across different generations. We are now seeing the afterlives of these movements, through the emergence of new political actors and the diverse geographies of protest coming together at this critical juncture. Queer and feminist movements have emerged in recent years and radically altered the politics of protest as usual. One such group has been La Colectiva Feminista en Construcción (La Cole), who have resignified and reshaped the way activism and protest are done in Puerto Rico. Their impact on the public sphere through agitation campaigns led to the expulsion of a Puerto Rican mayor accused of sexual assault. The #RickyRenuncia protest movement has not only included organizations like La Cole, which centers an explicitly intersectional agenda, but also other political actors have joined.

One of the most prominent individuals that has gained both support and has convened thousands is Rey Charlie (King Charlie), a working-class motorcycle enthusiast turned social media and popular culture celebrity. On July 17, Charlie led a motorcade with over 3,000 motorcycles and all terrain vehicles towards the mass protest in Old San Juan. Part of the motorcade included stops in different public housing projects and working-class and poor neighborhoods. Rey Charlie is an important and charismatic figure within the broader implications of the movement because he represents the inclusion of the most marginalized sectors that have been absent from traditional political landscapes. He led this motorized procession together with trap and reggaetón artists known in the urban musical genre. When he addressed both the procession members and a Puerto Rican news network via live feed, Charlie transmitted the message of not only calling for the resignation of Rosselló but also mused discursively about marginalization and oppression, acknowledging the political potential of “the poor and humble.” This kind of agentic consciousness has overturned and directly challenged many assumptions on both the left and right about the marginalized classes’ disinterest in political processes beyond the ballot box.

Queer groups have also been an important force within the broader #RickyRenuncia movement. El Hangar, a queer space in the Santurce barrio of El Gandul, has taken an active role in this week’s demonstrations. As they acknowledged in one of their calls for protest, “Everyone has auto-convened for the NATIONAL STRIKE…that is why we are extending an invitation to workers, students, Black women, immigrant women, lesbians, gays, transgender, queer, and all diverse identities and communities marginalized by patriarchy and governmental capitalism, to march with us….” Recognizing the multiply oppressed identities of those that have joined the movement, the Hangar is carving an intersectional space that re-signifies traditional leftist protest culture. They are centering the voices of those that have been traditionally left out of the political conversations in Puerto Rico because of their social locations at the margins of the margins.

Although various sectors make different claims that go beyond #TelegramGate, they are united under a common goal: getting Rosselló to step down, along with the other corrupt actors of his administration. The morning after the first clash between protesters and the police, the storefronts of Calle Fortaleza bore the cost of the previous night’s confrontations. When asked by journalists about the damage, most business owners sided with protesters, an act without precedent in recent history. This view contrasts heavily with the broken windows and anti-vandalism discourse the government utilizes to seek mass support. Other professional associations, artists, and celebrities have also called for the resignation of Rosselló, leaving him practically ally-less as the protests continue every day.

The online protest landscape has been an indispensable element to building momentum and pressure to other politicians in Rosselló’s pro-statehood New Progressive Party. It has also been a space for the global Puerto Rican diaspora to participate and voice their opinion. A similar process happened after Hurricane María, when the diaspora became unified through grief. Now it is rage that ties these diverse sectors together. As we write, we hear the chants of “¡Renuncia Rosselló!” (Rosselló Resign!) and spontaneous cacerolazos (pot banging protests from a particular Latin American tradition) from our Facebook live feeds. As part of the Puerto Rican diaspora living in the US, it has been through social media that we have been active participants in the protests. We have read and shared information in real-time during the manifestations, and have hosted watch parties with others in both Puerto Rico and abroad. When police have sent signs of shooting tear gas canisters, we alerted our friends and loved ones.

To be clear, #TelegramGate is not the only motivator for these protests. They are a manifestation of a larger malaise. The release of the chat transcript represented an “I’ve had it moment.” Puerto Ricans have grown wary of government corruption, neoliberal austerity measures, and the disposability of the lives of those that Rosselló made fun of with his friends in the chat. Perhaps these protests are the product of Puerto Ricans’ simmering anger and centuries of colonial exploitation. The #RickyRenuncia movement is based on a common interest, but the multiple intersectional and intersectorial solidarities being articulated in the streets present new possibilities for political agency. These solidarities are not premised on sameness or a perfect unity of interests, but of a common goal to defeat a common enemy. Only time will tell whether this solidarity is more than a temporal condition, or the beginning of another kind of Puerto Rico that living Puerto Ricans have never seen, but many had envisioned decades, even centuries before. This week finally makes these visions a possibility.

Aurora Santiago Ortiz is a social justice education scholar and PhD candidate at the University of Massachusetts Amherst.

Jorell Meléndez-Badillo is a Mellon Faculty Fellow (2018-2020) and Assistant Professor of History (2020-) at Dartmouth College.