Red Joan and the Myth of Gay Communist Blackmail 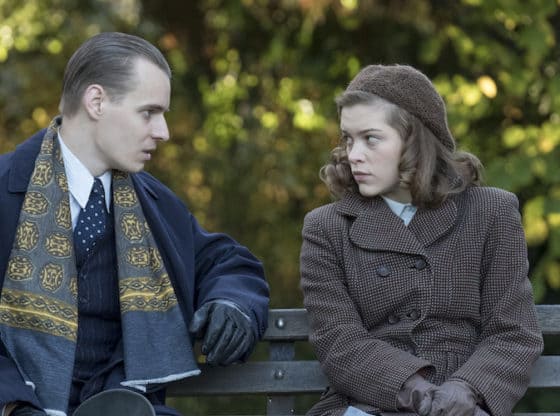 The young Joan Stanley on a park bench with William Fletcher in the scene where she reveals to him the damning photograph of his same-sex kiss. IFC Films
The Abusable Past |

As every good homosexual knows, there is no such thing as bad movie starring Dame Judi Dench. They might not all be Notes on a Scandal, the 2006 film where Dench played a barely-repressed lesbian creepily seeking the affection of a virile Cate Blanchett (about whom also, more please) but Dench’s unique ability to balance norm-core ordinariness with layers of hidden depth has made her into a queer icon. I could tell you I’d never taken an extra spin on EPCOT’s Spaceship Earth just to spend another seven minutes hypnotized by Dench’s dry narrative take on the history of global technologies, but I would be lying. If her voice were an option on my sound machine, I’d fall asleep to it. As Depeche Mode famously sang in a song that plays in my head whenever Dench appears on screen, I just can’t get enough.

Then I saw Red Joan. The film, based on a novel by Jennie Rooney, offers a fictional take on the story of Melita Norwood, a British woman who engaged in spycraft that assisted in the development of Soviet atomic weapons. Norwood is reimagined as Joan Stanley, secretary to an atomic scientist who, in her doddering old age, is visited by MI5 and carted off to an interrogation room where she repeatedly falls into tight-lipped reverie as she recalls her recruitment into the high-stakes world of international espionage during World War II. I will not dwell here on the clunky filmic device that requires Dench to repeatedly stare wistfully beyond the camera as she is transported back to a 1938 rally for the Spanish Civil War, a dusty Communist film screening at Cambridge University, and a number of Cinemax-level bedspread-shrouded sex scenes. It is most impressive that a film dealing with such hot themes can be so maddeningly dull. Even Judi Dench cannot create dramatic tension here, mostly because she appears on screen in only a few scenes following her arrest in 2000 and primarily to trigger an unanchored series of flashbacks from her character’s radical past.

Perhaps most surprising in the film, however – and perhaps the only surprising thing in this entire cinematic disaster – is Red Joan’s bizarre treatment of homosexuality and Communism. In this regard, the film seems itself to be as uncomprehending and unimaginative as the role in which Dench is stiflingly confined.

When she is a student at Cambridge, Joan meets William Mitchell, a leader in the Communist film society who is close to a male Indian comrade. Mitchell goes on to assume a high-powered position in the British foreign office, all while maintaining, incongruously, deep connections to the Communist Party and the Soviet Union. At a key point in the film, Joan unearths a photograph of Mitchell entangled in a deep kiss with his Communist lover. This latter character is uncredited in the film, suggesting a profound disinterest in the internationalist dimensions of Communism and the weirdly colonialist dimensions of a foreign minister carrying on with a presumably anti-Colonial radical. Joan tucks the photo into her purse, the latter of which might be a legitimate contender for best supporting actor, so often is it called upon to squirrel away critical plot points.

I believe it was the great Russian writer Chekhov who famously said if a photograph of a same-sex kiss appears in a film about espionage, it must be used for extortion later. Far be it from the directors of Red Joan to pass up such a dramatic shibboleth. Sure enough, the penultimate scene of Red Joan features the title character exchanging the damning photograph for passports that allow safe passage to Australia with her lover who has been falsely imprisoned for her actions. Out of this selfless act of betrayal comes Joan’s redemption: fast forward to Dame Judy Dench, once again in the present day, shuffling from her home, evidently aged several decades over the course of a couple days (like the film’s audience, for whom two hours feels like several years), and confessing that she did it all to avert nuclear devastation. And let it be known, her son-cum-defender, attests, it worked! Collateral damages be damned, the Cold War was a perfectly executed exercise in nuclear abeyance.

It is curious how powerful a force gay Communism can be in shaping the modern world. Never mind that William Fletcher is a Soviet sympathizer in the foreign ministry abetting the exchange of nuclear secrets with Russia. No, what impels his breaking point is a decades-old photograph of a gay kiss.

The myth of gay blackmail was a powerful narrative during the Cold War era. It was instrumentalized by the American government to force tens of thousands of federal employees out of their jobs – an injustice that is finally being recognized in the Lavender Offense Victim Exoneration Act currently proposed in the US House. It also pushed the Communist Party to adopt draconian policies within its ranks that disciplined untold numbers of gay Communists and forced them to abandon a movement that otherwise might have safeguarded their liberation. Yet there are almost no documented cases in which such blackmail actually led gay women and men to sell out their Party or their country. The myth has served primarily to further connect Communism with sexual dissidence, collapsing a political and sexual vanguard under the shared umbrella of deviance. It has effectively convinced us that despite the Cold War’s rabidly anti-Communist treachery, it was homosexuals who had the most to hide.

Which is why Red Joan’s hackneyed resuscitation of this boring plot point is so disappointing. Why did the film’s producers believe that homosexuality was a graver threat than treason? Why did Joan need a photograph of an old queer tryst in order to blackmail a Soviet spy in the highest echelons of British power? And why does the film give a free pass to its hero in spite of her act of homophobic treachery? While the producers might have believed they were faithfully capturing the homophobia of the era depicted in the film, I disagree. In the post-Cold War era, it is time to reconsider the myth that homosexuality was an effective tool of blackmail. It was not, but the pervasive belief that it might be remains a powerful force for casting suspicion over gay women and men who lived openly and happily even during periods of nearly totalizing repression.

It is a mercy of Red Joan that Judi Dench appears on screen so little. Even when cast as an unrepentant homophobe and a vehicle of pernicious lies about the Cold War, she possesses a unique power to charm and endear the most skeptical viewer. That her talents are squandered in service to such an irresponsible film is a far greater scandal than anything depicted in the movie, even a passionate kiss that this historian of homosexuality and the left would be thrilled to find in any archive. I am grateful that Dench’s limited screen-time provides so few opportunities to resent her this legacy. Perhaps her next big film will cast Dench as a wistful Berenice Abbott, or Jo Sinclair, or Agnes Smedley, or Elizabeth Gurley Flynn, or one of any number of queer women who found themselves in the orbit of the Left. That might make a hero worth actually celebrating, and it would have the added benefit of truthfulness.

Aaron Lecklider is associate professor and Department Chair of American Studies at the University of Massachusetts Boston. He is the author of Inventing the Egghead: The Battle over Brainpower in American Culture (University of Pennsylvania Press, 2013) and the forthcoming “Love’s Next Meeting: Homosexuality and the Left in American Culture” (University of Chicago Press). He has published articles in Slate, Salon, The Huffington Post, and other media outlets.