Surveying the Suburbs: How Amazon Ring and a Racialized Fear of Crime is Ushering in a New Period of Mass Surveillance 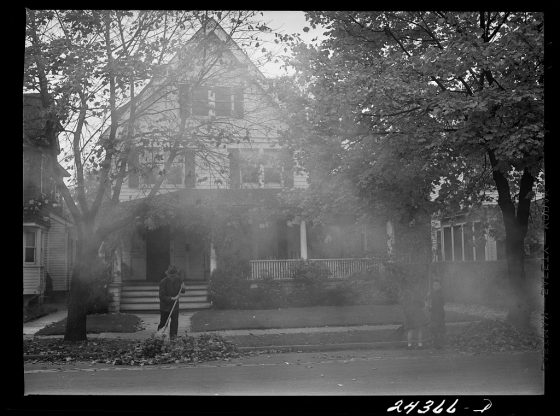 "Sweeping Fallen leaves in the Suburbs. New York City," 1941, Library of Congress Prints and Photographs Division.
The Abusable Past |

As of this moment, there are supposedly over 1 million surveillance cameras and microphones screwed into the front doors of people all across the United States. It doesn’t matter if a community is safe, suburban, rural, middle class, rich – they all have front door security cameras regardless. Of course, that’s what Amazon’s Ring surveillance doorbell company wants. “Fear sells,” says a blog posted by the company in 2016. In this case, the fear that sells is undoubtedly racialized.

The marketing materials used by companies like Amazon to convince residents of a suburban single-family home that they need constant surveillance are historically familiar. As many scholars have argued, including Sarah Igo in her recent book The Known Citizen: A History of Privacy in America, the suburbs have always operated under the pretense of “surveillance for thee and not for me.” High fences, tucked away bedrooms in the back of the house, all of which were central tenants of a white flight that saw millions flee multiracial cities attempting to reconcile with the end of legal segregation. The idealized life for a middle-class white American relied on home ownership and the privacy that supposedly accompanied it.

Entwined with the racialization of “inner-city” residents is the subjection of those urbanites to constant surveillance. Surveillance and the city have always had a paradoxical relationship. On the one hand, the proximity of buildings and neighbors, the ability for police or cameras to stake out crosswalks and major thoroughfares – all lend themselves to an understanding of the city as panopticon, where Black, brown, immigrant, and working-class people are exposed to the near-constant surveillance of the racial state and its enablers. Between the Progressive Era and the mid-twentieth century in the United States, this surveillance extended into the home as well, as the state built up its apparatuses to exert control over family life through the policing of sexuality, child welfare services, health inspectors, and the tenement squads of police departments.

On the other hand, however, the city was also a place of anonymity. People could slip into a crowded sidewalk teeming with people and disappear. Often times, the built city itself supported a person’s mission to remain unseen or anonymous through winding alleyways and mazes of narrow corridors. In seventeenth century New York, Black pedestrians, free and unfree, were often mandated to carry a lantern at night to enable constant surveillance and supervision, even at a distance. As Simone Browne recounts in Dark Matters: On the Surveillance of Blackness, extinguishing these lanterns allowed people, with sophisticated learned knowledge of the city and its physical traits, allowed people to subvert these laws.

White urbanites, as part of their mission to racially distinguish themselves from people of color, fled cities with their constant surveillance, and sought the privacy afforded to them by the suburbs. When there was surveillance, it was one sided.  As racial gatekeepers, white residents of the suburbs could survey their streets and neighborhoods to decide who belonged, while trying to maintain privacy of themselves and their families.

New technology, however, has reshaped those relationships. Suburbanites are opening themselves up to greater surveillance and privacy violations in an attempt to police and gatekeep racial outsiders. By creating a technologically-augmented way of policing the racial boundaries of the suburbs, white residents compromise their own historically protected privacy by explicitly inviting police, corporations, and bad actors into their homes as they never have before.

While the state had, in the past, found its way into the homes of white suburbanites, for instance through policies monitoring sexuality and the use of contraceptives in the home, for the most part life outside of the city came with an expectation of privacy and freedom from state interference. But now, with Ring cameras on the outside of homes, people are inviting the state back in.

What motivates this move to allow more and more prying eyes into the formerly sacred sphere of the white suburban middle-class family? As Ring says: fear. The fear stems from more than just the encroaching racialized criminal. It’s coming from inside the house. Baby sitters, house sitters, dog walkers — Ring encourages you to keep an eye on all of those people. Not necessarily racial others, but often class others, that by necessity suburbanites allow into their homes to do their labor.

As of March 2020, Ring now has over 1,000 partnerships with police departments. These partnerships allow police access to a special law enforcement portal that they can use to bulk request footage from Ring cameras within a half mile radius. The requests appear as an email in which users are asked to “share” their footage with police, usually for windows of between eight and twelve hours. With cameras inside and outside of people’s homes, this extends the reach (and vision) of police into once protected spaces.

Suddenly, there are rooms in a person’s private home that may not be private by virtue of a small window that the state, and others, can peer through.

And peer they have. Recently it was reported that four Ring employees were fired for watching footage from user’s cameras. Bigger news emerged late in 2019 when footage began to surface of malicious actors seizing control of Ring cameras inside peoples’ homes and using them to harass children, traumatize families, and hurl racial epithets.

Surveillance has always been woven into the built space and social relationships of the suburbs, and yet, fear of crime and technology threatens to formalize a constant threat to privacy. Where once surveillance manifested in eye-witnesses spreading gossip that could be accepted or rejected by community members, these previously existing social relations are exacerbated by new technology. Automated motion-activated cameras can capture a marital disagreement in a neighbor’s driveway — the footage preserved forever and easily shareable to Facebook. This is not the one-for-one equivalent of the pervious generation’s eavesdropping neighbor. This is privacy invasion on a whole new level — and it’s justified as a way to preserve the current socio-economic status quo.

And these major concessions to privacy are all made in the name of safety.  Despite the fact the PEW research shows that while crime in the United States is at an all-time low, fear of crime has never been a more potent engine of social dynamics and political motivation. It should come as no surprise then, that when ground-level mass video surveillance came to the suburbs, it would come under the guise of guarding packages from racialized and criminalized others.

Matthew Guariglia is a visiting research scholar in the department of history at University of California-Berkeley and a policy analyst researching surveillance and privacy at the Electronic Frontier Foundation. His writing has appeared in the Washington Post, Slate, VICE, and MuckRock and is currently working on a book manuscript about the impact of empire, immigration, and racial science on the global history of policing New York City. You can follow him on Twitter at @mguariglia.