The Abusable Past: Column Zero 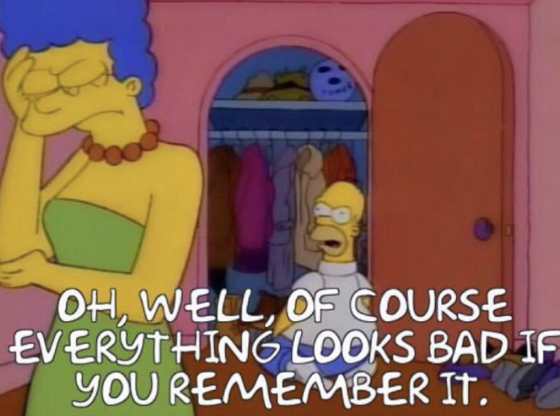 The Abusable Past debuted in the fall 1984 issue of the Radical History Review with a hand drawn bottle of aspirin spilling out onto the page. It was an apt metaphor given that the Abusable Past aimed to dull the pain that came with seeing the many uses and abuses of historical memory that marked the the ascendancy of  right-wing populism and neoliberal common sense around the globe. With wry humor and steely-eyed clarity, R.J. Lambrose skewered the “weird and amusing uses of the past” they encountered in the media and public sphere.

The first Abusable Past began with both a call to arms and invitation to readers to call out bunk history:

“With this issue, the Radical History Review inaugurates a column of notes and comment on recent news stories that have a direct bearing on the work of historians and on the character of popular memory. The items will range from the ephemeral to the immediately threatening, and we hope that readers will clip and send us contributions of their own.”

Each subsequent set of dispatches from Lambrose began with this manifesto, which spoke not only to the ubiquity of historical manipulation but also to the urgency with which historians needed to counter it.The Abusable Past functioned as a space to punch up and take aim at the powerful while dealing with pressing issues that historians found themselves uniquely equipped to address.

In many ways, the Abusable Past was serving up the hottest of hot takes and busting down the boundaries between History (CAPITAL H!) and public history long before this became the norm as historical analysis moved online and grew its social media presence. (Was R.J. Lambrose an influencer? Maybe?) Of course, not everyone appreciated the important space that Lambrose  carved out with the Abusable Past, as one reader put it:

“I do not believe that a serious and engaged intellectual publication needs a gossip column, let alone one that routinely reflects a condescending, smart-ass, and petty slant on almost everything it comments upon. This brings no dignity to the RHR. But you have obviously debated among yourselves the question of why you must retain this feature, so I hardly believe you are going to do away with it on the basis of my letter.”

As we launch this new digital platform, we can think of no better tradition of engaged public scholarship to revive than the Abusable Past. We want this to become a space where together we can confront the urgencies of this historical moment with the rigorous analysis and occasional snark that it demands. Like the original Abusable Past, we invite you, dear reader, to contribute short articles on recent news stories that have a direct bearing on the work of historians and the character of popular memory, ranging from the ephemeral to the immediately threatening. We hope that this space can become a vibrant space for conversation, introspection, and plotting.

And to those who say that the old Abusable Past lacked decorum and that we shouldn’t try to revive it we’d like to remind you that, as Lambrose would put it, Marxists always do everything with class.

Send us your short pitches at abusablepast@gmail.com. If it’s a fit for the site, we’ll ask you to send us a full draft of 750-1500 words. We aim to maintain a relatively quick turnaround time and will update the site regularly.