The Long Shadow of Anticommunism in Chile: From the 1964 “Campaign of Terror” to Piñera’s 2019 “War” 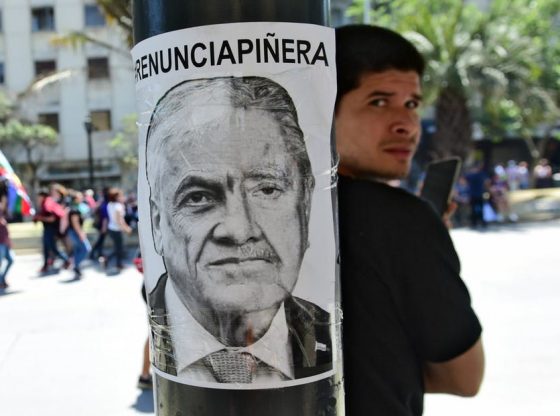 Poster with a montage of the faces of President Sebastián Piñera and the dictator Augusto Pinochet, with the words “Renuncia Piñera” [Piñera Resign]. Photo credit: Martin Bernetti/AFP.
Addendum |

Editors’ Note: Addendum is where we feature original content related to the latest issue of Radical History Review. Marcelo Casals is the author of  “Chilean! Is This How You Want to See Your Daughter?”: The Cuban Revolution and Representations of Gender and Family during Chile’s 1964 Anticommunist “Campaign of Terror,” which appears in issue 136, Revolutionary Positions: Gender and Sexuality in Cuba and Beyond.

On October 20, 2019, two days after the outbreak of mass protests in Santiago de Chile sparked by a clumsy price hike in metro fares, Chilean President Sebastián Piñera addressed his fellow citizens from the Moneda Palace. In a speech many Chileans will remember for years to come, Piñera assured them that his government was “at war against a powerful enemy, who is willing to use violence without any limits.” In practice, this declaration of war empowered the police and military to violently repress protests, with the understanding that the nation was under attack by a mysterious unidentified force. The result to date has been dozens killed and hundreds wounded, many with eye wounds caused by the irresponsible use of antiriot shotguns. Organizations such as Human Rights Watch, Amnesty International, and the United Nations have condemned the Chilean government for flagrant and repeated violations of human rights. All this has contributed decisively to the government’s plummeting popularity and the sharpening of an enormous political crisis.

Piñera’s speech was not just a failed attempt to deceive the population and legitimate excessive repression. It also reflected a conservative mentality with long roots in Chile, used to understand and denounce all expression of social protest. With his declaration of war, Piñera sought to reduce the outbreak of protests to a problem of public order and national security. That allowed him to ignore the legitimacy of citizens’ demands, which immediately went far beyond rising transportation fares. In effect, the mobilization of millions of Chileans across the country over the next few weeks was (and continues to be) rooted in a reaction against the structural inequalities of neoliberalism, generalized corruption among elites and business leaders, and, in general, the unresolved problems of the transition to democracy and the pernicious legacies of Augusto Pinochet’s long military dictatorship (1973-1990).

In large measure, Piñera could not have done otherwise. He represents neoliberal Chile better than most: a multimillionaire businessman who amassed a fortune principally through speculation during the military dictatorship, and then after the democratic transition, used those enormous resources to build a political career that has made him president twice. In his own mind, it was impossible that the majority of Chileans would rise up against the “Chilean model,” which in his eyes had brought only prosperity and opportunities Beneath that self-satisfied discourse, shared by a large part of the Chilean oligarchy, a growing unease had incubated before the enormous concentration of wealth, profound commodification of social life, and a generalized exhaustion before the growing corruption and impunity of Chile’s dominant classes.

Piñera’s “war” directly references the fundamental logic of anticommunist discourse, which has a long presence in Chilean history. Popular organization, social mobilization, demands for social change, and protests were often understood as a global conspiracy directed by the Soviet Union, assisted by local agents organized into the Marxist left. This was the reason that conservative sectors sought to criminalize the Chilean Communist Party in 1948 as the Cold War escalated.

The Cuban Revolution aggravated those fears, decisively influencing Chilean politics in the 1960s. From that moment on there was a revolutionary model in Latin America which, in addition, sought (unsuccessfully) to export socialism to other countries in the region. All this activated a series of continental political changes which, in Chile, resulted in the rise of Christian Democracy as a reformist option that was simultaneously anti-Marxist, as well as deepening US intervention into local politics.

The government of Salvador Allende and his Popular Unity coalition (1970-1973) experienced these processes first-hand: the opposition managed to rally the support of a large part of the population articulated around an anticommunist imaginary, a decisive factor in the defeat of the left in power. For its part, the military coup of September 11, 1973, elevated anticommunism to a state ideology, seeking the necessary legitimacy to undertake economic and institutional reforms and, especially, to unleash an enormous repressive apparatus against political dissidents of all kinds. In this sense, contemporary Chile is closely linked to the long shadow of anticommunism in our recent history, especially within the political framework of the Latin American Cold War between the 1960s and 1980s.

A good part of anticommunist rhetoric during the Cold War was wrapped up in the gendered anxieties of conservative Chileans. From their perspective, socialism was not just a threat to the privileges of the affluent, but an attack on the “normal” distribution of gender roles and their institutionalization within the family. Much of this rhetoric has reappeared in recent public debate in Chile, especially during the process leading to the constitutional reform.

For the government, the political right, the conservative media, and the business class, the Chilean crisis is nothing more than a concerted attempt to sink a successful economic model, pulling down social norms understood by conservatives as “natural” in the process. For this reason the articulation of social protest with the mass feminist movement that emerged in recent years has set off alarms among the spokesmen of Chilean conservatism. This is no longer just about defending the economic and institutional orders created during the military dictatorship, but also about “protecting” the family and “life” from the mass demands for reproductive justice and gender equality.

In my article published in the most recent issue of the Radical History Review, I explore one of the most important episodes in the consolidation of anticommunist logic in Chilean public debate – the “campaign of terror” during the 1964 presidential elections and its articulation with powerful conservative gender discourse. That year, the principle candidates were Salvador Allende, representing the Marxist left, and Eduardo Frei, representing the Christian Democratic party and supported by right-wing parties who feared the triumph of socialism. At the same time, fearful that Chile could become a “second Cuba,” the United States intervened in the campaign by financing an enormous onslaught of propaganda dedicated to demonizing the Marxist left.

The 1964 “campaign of terror” included spreading anticommunist messages via all available media: radio, posters, pamphlets, speeches, and rumors. Many of these messages were directly inspired by the Cuban experience. The conservative press, for example, argued repeatedly that the eventual triumph of Allende would lead to the installation of a violent, arbitrary revolutionary dictatorship, which would turn the country over to the Soviet Union and Cuba. As the presidential election approached, these messages cohered into a line of argument that would prove to be particularly persuasive for many voters: the left and “Marxism” sought to destroy the family and, in the process, abolish accepted gender roles. Children would be indoctrinated by the state and parents would lose patria potestad (legal rights over their children), as had supposedly happened in Cuba.

Even worse, daughters would be forced to join militias and rural literacy campaigns without family oversight, which implied the possibility of an intolerable sexual autonomy. Mothers, in this scenario, would be prevented from carrying out their roles as protectors and defenders of domestic harmony, while fathers would no longer be able to provide for their families given the rigidity of the future socialist economic system. In sum, the deepest implicit rules of family structure would be profoundly disrupted. In this way, the “campaign of terror” sought to persuade by generating fears that went beyond traditional institutional politics. The mix of what we might call a “moral anticommunism” and the local reception of the Cuban experience became particularly strong in the final weeks of the presidential campaign.

As we can deduce from the centrality of the Cuban revolutionary experience in the presidential election of 1964, anticommunism was not an exclusively Chilean phenomenon, nor was it exclusively focused on domestic politics. On the contrary, anticommunism operated as a common language for right-wing Latin Americans during the Cold War, allowing them to intertwine the particularities of national political conflicts with what they saw as a universal struggle between good and evil. In this way, events in a Caribbean island not far from the United States could have decisive influence in an Andean country on the other side of the American continent.

The transnational character of this anticommunist rhetoric also facilitated the creation of collaborative networks between actors on different sides of the continent. As Margaret Power has shown, groups of conservative Chilean women who organized to promote anticommunist propaganda in 1964 sought and found inspiration and support among their Brazilian counterparts. Just months before the Chilean elections, those Brazilian women had helped lead mobilization against Joao Goulart that ended in his overthrow in a coup and the installation of a long military dictatorship. Other far-right Chilean organizations like Fiducia sought references in Brazil in Catholic integralist movements like Tradition, Family, and Property, in whose doctrine anticommunism was a central pillar. And of course, the intelligence agencies of the United States were key in financing and designing this campaign. The CIA, through its interventions, sought to demonize the alternative Allende represented, using a global language of anticommunist struggle, omitting the civic and democratic character of the Chilean left’s project.

International anticommunist collaboration led to a few episodes with great impact on Chilean politics. Just a few hours before the elections of September 4, 1964, various right-wing radio stations violated federal law when they broadcasted a powerful speech by Juanita Castro, Fidel’s alienated sister, who by then had abandoned the island and was in Brazil, invited by the authorities of the military dictatorship. In her speech, Juanita Castro was particularly concerned with informing Chilean women that Allende and the Marxist left follow the path of Fidel Castro in Cuba: a revolutionary dictatorship that would destroy the family, the security of one’s children, and religion. That final episode of the “campaign of terror” symbolized the potency of both “moral anticommunism,” with its strong gendered components, and the centrality of Cuba’s image in Chile.

For many years we Chileans thought that the most radical anticommunist expressions belonged to the past. Yet the mass protests ignited in October 2019, directed explicitly against the political order inherited from the military dictatorship, put dominant sectors on the alert. The mental framework behind Piñera’s “war” and its ridiculous denunciations of foreign intervention in the protests, rest on the long anticommunist tradition that reached a peak in the period that opened with the Cuban Revolution and closed with the end of the southern cone military dictatorships in the 1980s. Cuba’s role as a dystopian revolutionary reference point has now shifted to Maduro’s Venezuela but with the same implicit message: any attempt at structural change will lead to moral disaster and economic ruin. Luckily, a great majority of Chileans understand that the inequalities of neoliberalism and the rigidity of the constitutional order installed by the Pinochet dictatorship are now intolerable. The political conflict from now on will be marked by the democratic vocation of the majority and the conspiratorial deliriums of the Chilean oligarchy, reluctant to lose the enormous privileges it accumulated in the past few decades.

Surveying the Suburbs: How Amazon Ring and a Racialized Fear of Crime is Ushering in a New Period of Mass Surveillance
Hurricane Corona