Working During COVID-19: Occupational Hazards and Workers’ Right to a Safe Workplace 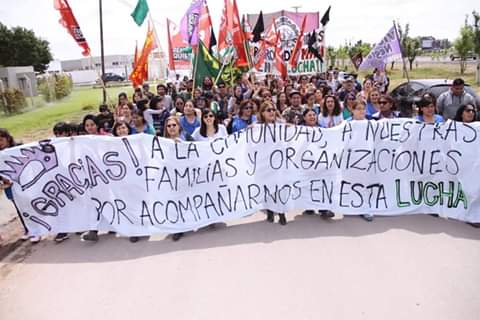 By Diego Ortúzar and Ángela Vergara

Meatpacking companies in the U.S. are reopening their plants despite widespread infection among their workers, nurses around the world are being pushed out of their homes because of fears of contagion, and teleworking has increased domestic violence and anxiety symptoms. Fears of unemployment have forced many workers to accept and not report unsafe working conditions. Is it possible to think about the above situations as high-risk working conditions? Is COVID-19 an occupational hazard? Could workers demand safer working conditions, and if so, from whom and how?

The global discussion around COVID-19 has focused on the role of governments and health authorities to flatten the curve, protect the population, and mitigate the economic consequences of quarantine periods. But there is little discussion about employers’ responsibilities to their employees and the public during the current pandemic. In the United States, fearful on potential lawsuits if workers get sick, Republican leader Mitch McConnell and the Chamber of Commerce have asked to provide business owners with legal immunity in COVID-19 related lawsuits. Other countries have made steps to consider COVID-19 an occupational hazard. The French government has proposed to recognize COVID-19 as an occupational disease for all caregivers, but the exact definition of the caregiver remains unclear. In Chile, the Social Security Office declared COVID-19 an occupational hazard when employees contract the disease at work. As countries move to re-open regular economic activities while still fighting the virus, workers’ rights to a safe workplace are especially critical.

Since the mid nineteenth century, the labor movement has fought for a safe workplace. Explosions in mines, train derailments, and other catastrophic accidents around the world, such as the case of the Triangle Shirtwaist Factory Fire in New York City that killed 146 workers, attracted widespread media attention. These cases triggered strikes, increased support for workers’ demands, and sparked new rules and regulations. Some of the first labor laws addressed the question of occupational safety, including employers’ obligation to provide medical assistance in case of accidents or include proper ventilation in smoky factories and underground mines.

In most countries, labor laws would require employers to guarantee a safe workplace and provide workers with protective gear and information about occupational risks. When these mechanisms of protection have failed, workers and their families have had the right to emergency and long-term medical assistance and disability compensation. A safe workplace also became an international labor standard. Since its foundation in 1919, the International Labour Organisation (ILO) has approved a series of conventions, recommendations, and protocols compelling countries to enact and enforce protections in the workplace. It has also recognized unique, dangerous risks and professions such as mine, construction, and dock workers as well as agricultural and forestry workers. Throughout the second half of the twentieth century, it called attention to new industrial risks such as the impact of radiation, asbestos, air pollution, noise, and vibration, as well as chemicals on workers’ bodies.

The enforcement of workplace safety has historically been difficult. To protect themselves from workers’ claims, large employers have purchased insurance and, as a result, many injured workers and victims’ families have faced lengthy and expensive lawsuits. The legal and medical process to receive compensation has especially been troublesome in the case of occupational diseases. Employees suffering from an occupational disease must demonstrate that they contracted it at work, something that, especially in the case of chronic ailments, has never been easy.

Employers and insurance companies have tried to evade their legal responsibilities by denying the causal links between a job and a disease, relativizing the severity of symptoms, and blaming workers for their poor health and pre-existing conditions. Then, once the evidence is overwhelming, they have introduced flexibility into the legislation and reduced payments to victims. To receive compensation, workers need access to medical technology, lawyers, and courts, a medico-legal architecture that is sometimes inaccessible or used against them by those seeking to reduce their operation costs. In the mining industry, for example, workers struggled for decades to include silicosis and other lung complications in the list of occupational hazards, and, even today, they have to overcome overwhelming bureaucratic red tape to receive disability benefits. In contrast, workers in the petrochemical industry rarely received compensation when diagnosed with cancer, one of the main occupational hazards, because of the difficulties in demonstrating the links between the workplace and the disease.

Today, workers across the world face unprecedented risks. On March 28, 2020, the International Labor Organization urged countries to recognize both COVID-19, as well as post-traumatic stress disorder caused by COVID-19, as occupational diseases and guarantee that employees and their families receive protection and compensation. “Employers,” the ILO document stated, “have the overall responsibility of ensuring that all practicable preventive and protective measures are taken to minimize occupational risks,” including providing “protective clothing and protective equipment” and information about the risks. Also, workers have the right to leave work if conditions are too dangerous. These measures should be in place in supermarkets, mail offices, health care and funeral facilities, and waste facilities, for instance.

The enforcement of workplace protections during the COVID-19 crisis faces many obstacles, reflecting the unequal balance of power between workers, employers, and the state. Essential workers in the transportation, delivery, health care, supermarket, and trash collection industries are at high risk of contracting the disease. Many of them are among the most vulnerable workers: immigrant, undocumented, and women workers who earned below the minimum wage and have limited access to health-care protections. As a subway conductor in New York City put it, “we are not essential, we are sacrificial.”  A statement that illustrates the long and intertwined history of racism, discrimination, and work-place safety. More than fifty years after the Memphis Sanitation Strike (1968), essential workers are still fighting for a safe workplace.

For workers in the informal economy, ILO warns, is “contagion or starvation.” Deprived of any protections whatsoever because they are not considered “wage workers” but independent contractors, car-sharing drivers, landscapers, and street vendors are being left to their own fate. This comes as no surprise. Companies like Uber and Deliveroo have consistently opposed offering their drivers and messengers a formal labor contract, depriving them of basic benefits such as sick leave and unemployment insurance. In some parts of the Global South, informal workers make the big majority of the labor force and have limited access to health care and social security. As informal workers defy shutdown orders to survive and feed their families, they expose the deep inequalities that exist in their countries.

Even for professional and white-collar employees, remote and online working systems are also creating long-term health consequences and other risks that we are unaware of, including long hours in front of computers, cramped working spaces, and privacy concerns Along with their regular responsibilities, teachers and caregivers, most of them women, are doing an enormous amount of emotional labor, which has a toll on their mental health. As public authorities are lifting quarantine restrictions, many more are going back to work with minimum protections.

Around the world, from nurses to Amazon workers, people are protesting unsafe conditions and unfair treatment and demanding free testing, sick leave, and economic compensation. Workers and labor unions are fighting to make sure that companies adopt minimum health standards and provide accurate information on risks, on how many people have fallen ill, or how safe it is to return to work. In many of these cases, occupational risk laws provide an essential tool to force companies to guarantee a safe workplace and claim compensation in cases of COVID-19 and its psychological and physical ramifications. But to have a safe working environment and, ensure that safety rules remain in place as countries transition to the “new normal” of social distance and wearing face masks, some workers and their unions are asking to be included in the decision-making process. The AFL-CIO, for example, has made it clear that to reopen the economy, “Workers must have a say in these decisions at every level: workplace, industry, city, state and federal. Working people are the ones whose lives and health are on the line, and workers and our unions must have a role in deciding whether it is safe to go to work.”

In occupied factories and cooperatives, workers’ assemblies are taking an alternative path to protect all workers and guarantee production. Traful Newén is an Argentine textile company under workers’ control since a lockout in 2017. When the first COVID-19 cases were diagnosed in Argentina, textile operator Marina Catilao explained to us during a recent phone interview that the workers’ assembly met with an occupational physician. Based on medical information, the assembly decreed that older workers and those with co-morbidity, as well as those with domestic emergencies (e.g., parenting, care of the elderly) stay home. They implemented occupational safety measures such as separating work machines by two meters, using hand sanitizer, and staggering the entry of customers. The plant also started making masks, lab coats, boots, and other protective gear and signed an agreement with the Ministry of Health to provide 18,000 masks per month. These are both measures of social solidarity, explains Catilao, as well as strategies to continue operating and survive financially. The approach has been successful, and Traful Newén has not only protected workers’ health but increased production, created two new jobs, and has now 28 workers.

Other companies with high levels of workers’ participation have implemented similar practices. Rimaflow is a cooperative and self-managed company in Milan, Italy. Like Traful Newén, Rimaflow is a recovered company, controlled by a workers’ assembly since it went bankrupt in 2018. The company is also implementing occupational safety measures and is shifting production from electronic recycling to making sanitary materials. These measures have protected workers and maintained the economic viability of the company under the current health and economic crisis.

The world faces one of the worst health crises since the Spanish flu epidemic of 1919, its ad portas of a major economic depression, and austerity measures are threatening the remains of the welfare state. The global crisis has also become an excuse to undermine workers’ rights, making it more difficult to enforce safety laws and giving more power to employers. But workers in occupied factories and cooperatives have shown that economic survival is not incompatible with workers’ safety and solidarity. Indeed, workers’ health, life, and wellbeing are the basis for economic recovery.

Diego Ortúzar is a PhD student of history at the École des Hautes Etudes en Sciences Sociales (EHESS) of Paris. His research focuses on Chile’s modern labor and health history, and he is the author of “La política de las enfermedades profesionales: Anquilostomiasis y silicosis en Chile, 1920–1940” (2015) and co-author (with Vergara) of “Bringing Justice to the Workplace: Labor Courts and Labor Laws in Chile, 1930s–1980s” (2017), among others. He is currently researching international agricultural development missions in the Andean countries during the twentieth century.

Ángela Vergara is a professor of History at California State University Los Angeles. She obtained her BA in history at the Pontificia Universidad Católica de Chile in Santiago, Chile (1994) and her PhD at the University of California San Diego (2002). She is the author of Copper Workers, International Business, and Domestic Politics in Cold War Chile (2008) and co-editor of Company Towns in the Americas (2011) and the special issue of Radical History Review, The Other 9/11: Chile 1973 – Memory, Resistance and Democratization (2016) In her forthcoming book, Protecting Jobs, Empowering Workers: The Fight against Unemployment in Twentieth-Century Chile, 1910s-1980s, she tells the story of how workers, welfare professionals, and policymakers defined and battled unemployment and job instability in Chile.

Epidemics in American Concentration Camps: From the “White Plague” to COVID-19
Counter-editorial: Bad Bunny is queer to me.